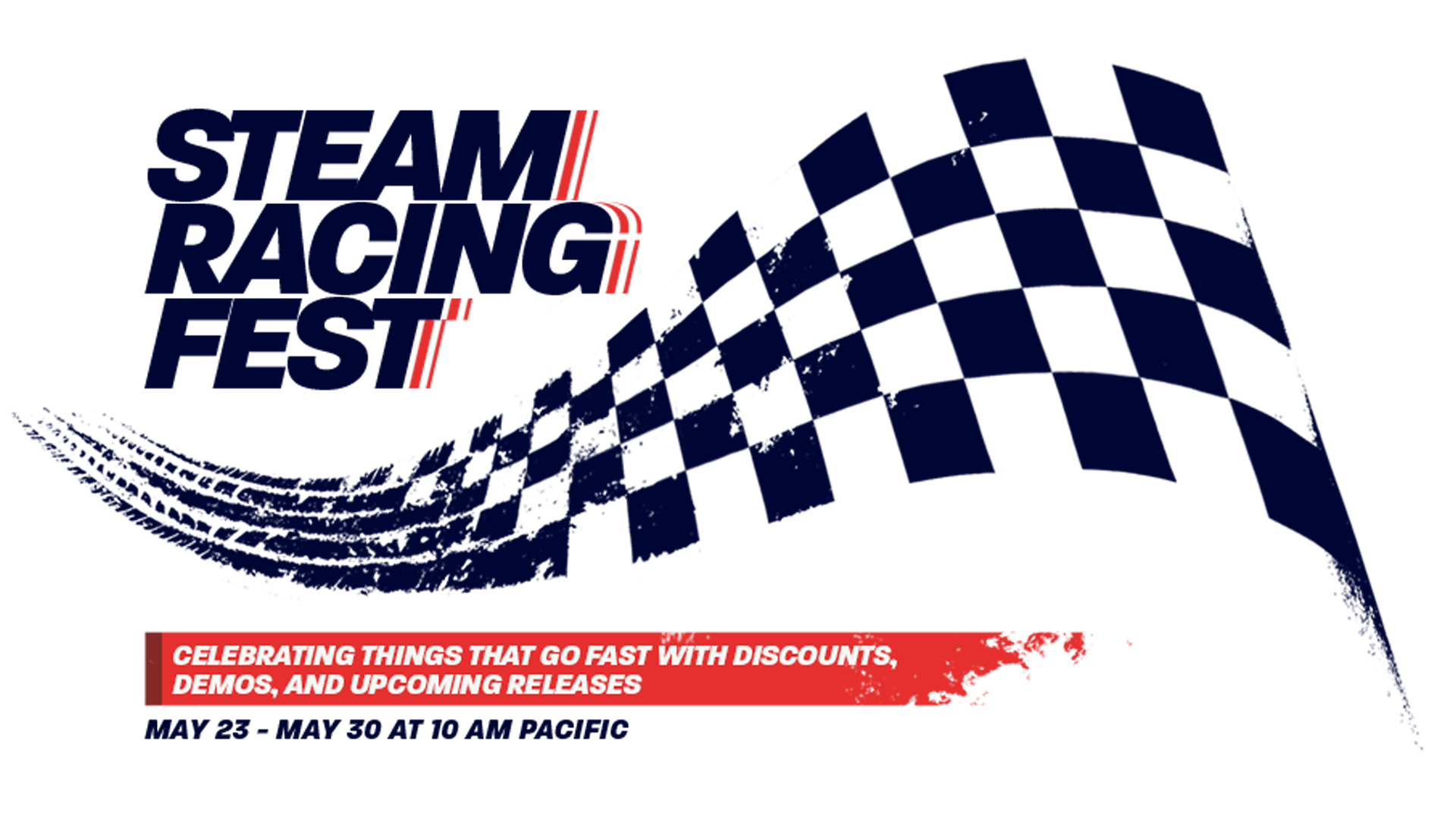 From 23rd May to 30th May, save loads of money on some of the best racing titles available through the Steam Racing Fest.

On Monday, 23rd May, the Steam Racing Fest went live with tons of huge savings on many popular titles. Many popular racing game titles have big savings through 30th May.

We’ve taken a look at what’s available and put together a list below with some of our favorite titles included. Check it out!

Assetto Corsa released back in 2014 from Kunos Simulazioni. A precursor to one of our current favorites here at Traxion.GG, Assetto Corsa Competizione (which is unfortunately NOT on sale this week), AC is one of the best when it comes to real feel. It’s also gotten the Digital Bros a lot of revenue, even in recent times.

This particular title was already relatively cheap at $19.99, but now you can get it for 80 percent off! A lot of the DLC packs for AC are also on sale for 80 percent off, so make sure you check that out as well!

This Need For Speed title is the latest in the franchise that isn’t a remaster, at least until the next game releases at some point this year. Released back in 2019, Need For Speed Heat takes players to Palm City for that classic underground street racing style the series is well known for.

This is for the deluxe edition of the game, which comes with some added perks already over the standard edition. 80 percent off is a pretty good deal if you’ve always wanted to give this title a shot.

We’re still talking about new stories and chapters for this title even though it was released nearly four years ago in 2018. If you’ve been enjoying reading our content on the latest Season 5 updates for American Legends, it’s only $9.99 to get the base game.

80 percent off makes this title one of the best deals during the Steam Racing Fest.

For the bike racers out there, Milestone’s latest RIDE title in RIDE 4, which released back in 2020 and got it’s last piece of bonus content last August, is the best bike racing game deal on the board.

It might be a little older than the others on the list, but it you’re looking for a bike game that’s cheap, this may be a good place to start!

rFactor 2 is one of the top rated sims out there, hosting top level sim racing events like the Le Mans Virtual Series and more recently, the IndyCar Pro Challenge.

UPDATE: There is a special rFactor 2 DLC now a part of the sale, a “Best of the Best” pack for $25.17. Getting any base simulator for under ten bucks is pretty good, in my opinion. Plus, if you haven’t tried rFactor 2 yet and you might be interested, $8.95 is much less of a hit to the wallet.

The simulation-style rally racer as opposed to the more simcade-style seen in the latest game in the franchise (DIRT 5), DiRT Rally 2.0 was released back in 2019 and still has a seat at the table of current-day esports. In fact, the Jersey eRally from a few months ago was completed on this platform.

No, it’s not the latest Forza Horizon game in the series, but Forza Horizon 4 still has regular festival updates despite new content ceasing just before Horizon 5 released last year. This game takes place in a fictional Great Britain and still has thousands of people playing it.

Honestly, Horizon 5 was my first foray into the franchise, but looking at that sub-20 dollar price tag has me considering checking out the predecessor in the series. It also blows my mind that it’s still offered at full price despite the party down in Mexico being as big as it is.

Wreckfest is still one of those games today that anyone can have fun with. Soft-bodied vehicles with a destruction derby mindset, and the physics on this one are pretty great as well.

Right now, you can get into the wreck-tivities for 60 percent off the normal price, plus all of the DLC is on sale as well. I highly recommend this one for sure.

Another highly touted simulator that’s continuing to shine as its developed, Automobilista 2 is on sale right now for half its normal price. You won’t find more Brazilian sim racing content anywhere else, plus they recently added the old CART open wheelers from the 1990s and those are some of my favorite cars ever.

The 2020-2022 Season Pass is also on sale, which includes all of the extra content and expansions that surrounds the game. On its own, it is normally $99.99, but you can get it for $79.99. Also, you can get the game and Season Pass together for $89.98, which is the best deal on the board financially if you don’t already own the game.

The latest GRID game in the franchise is on sale for half its normal price. The story surrounds a fairly low-ranked team in Seneca Racing as they attempt to succeed in the GRID World Series with their drivers Yume Tanaka and the player as Driver 22.

It’s a fun simcade style racer, and while $29.99 is one of the more expensive sale prices on this list, if you were ever considering GRID Legends, now is definitely the time.

Another one of our favorites in recent releases, Hot Wheels Unleashed joins the Steam Racing Fest at half price. Many of us grew up collecting the real thing, and to see the franchise with those toys that plays pretty well, this is another one many of here would be likely to recommend.

Seriously, there’s so much content for this title. Not only is there so much you can get in the base game which is currently 50 percent off, but select DLC passes and expansions are also on sale at 40 and 30 percent off.

For our drifting friends out there, CarX Drift Racing Online is a fantastic title, released back in 2017, that still gets updates and added content to this day. While it’s already fairly cheap at $14.99, if you’re a drift enthusiast or you want to be a drift enthusiast, this is for you.

Even though we know that WRC Generations is coming later this year, WRC 10 is still the current and most recent title in the series from Kylotonn and Nacon. Following the 2021 World Rally Championship, WRC 10 is a must-buy for anyone who loves rally racing.

On top of that, it’s got a pretty respectable esports following that we cover here at Traxion.GG. Right now, the game is 45 percent off, which puts it below $30. I would definitely consider getting it at that price point.

The Steam Racing Fest sale appears to be a hotbed of motorcycle game bargains, and RiMS Racing joins the phalanx of two-wheel deals available.

Another motorcycle racing game, and this is the latest from Milestone. Only just a month since its release, this might be the newest racing game available at a discount through the Steam Racing Fest.

MotoGP 22 comes with over 120 different riders, 20 official race circuits, and brings forth the most authentic and immersive MotoGP experience. It is 40 percent off the regular price of $49.99, and if you we’re looking at any of the extra content as well, those are also on sale.

Alongside MotoGP 22 and RIDE 4, the final bike racing title on this list, released two months ago, is the official video game for the Monster Energy AMA Supercross Championship. As opposed to the other two, this is more of an arena motorcycle racing series, where the others are more of an outdoor racing style of game.

After finally fully releasing out of Early Access back in February, the karting simulator KartKraft hit the Steam store at its final full price of $39.99. During the Steam Racing Fest, users can get the title for 25 percent off at $29.99.

The game is still expecting further development, per the most recent community update. Regardless, this sim arguably has some of the best physics out there, so if you didn’t get it during Early Access, this will likely be the best time to get all of the content, as there are currently no DLCs for this title.

We do love this top-down racer from Original Fire Games and Square Enix. Circuit Superstars might look cute and cuddly, but deep down, this is a beast of a racing experience where preciseness is key. The racing grooves will form, the tires will wear, and the strategies are aplenty in this title. The physics are great all around.

This promotion was kind of hidden, but it is 25% off currently during the Steam Racing Fest, bringing the overall price down to $14.99 from $19.99. If you haven’t tried this one yet, definitely look into it.

Another soft-physics simulation car driving game, BeamNG.drive is still in Early Access despite its initial launch back in 2015. The damage model is the selling point for this title, as there really isn’t any game or sim that does it better.

I think its currently in v0.24.1.2 or something like that, so while the pre-release updates are still a plenty, this title is still a heck of a good time. Normally $24.99 for the full Early Access, Steam users can get it for 20 percent off at $19.99 during the Steam Racing Fest.

While iRacing itself doesn’t cost anything for the base, you need to be a subscriber to access any of their “free” content. It’s a unique setting in sim racing, to be fair. Right now, however, new members can sign up through Steam at highly discounted rates.

This is ONLY for new iRacing accounts, however. Plus, you’ll still need to buy all of the cars and tracks separately. STILL, this is a great deal to get your foot into the door!

This one is actually free-to-play already, but during the Steam Racing Fest, all extended content that you normally have to pay for is free to try out.

We already reported this one a few days ago. While you won’t be saving any money if you do intend to purchase the extra RaceRoom Racing Experience content, it is nice to get to try it before you buy it.

What racing titles are you excited to see on this list? Are there any you wish were included in the sale or are there any games I didn’t list above that you are going to try out? Let us know in the comments!