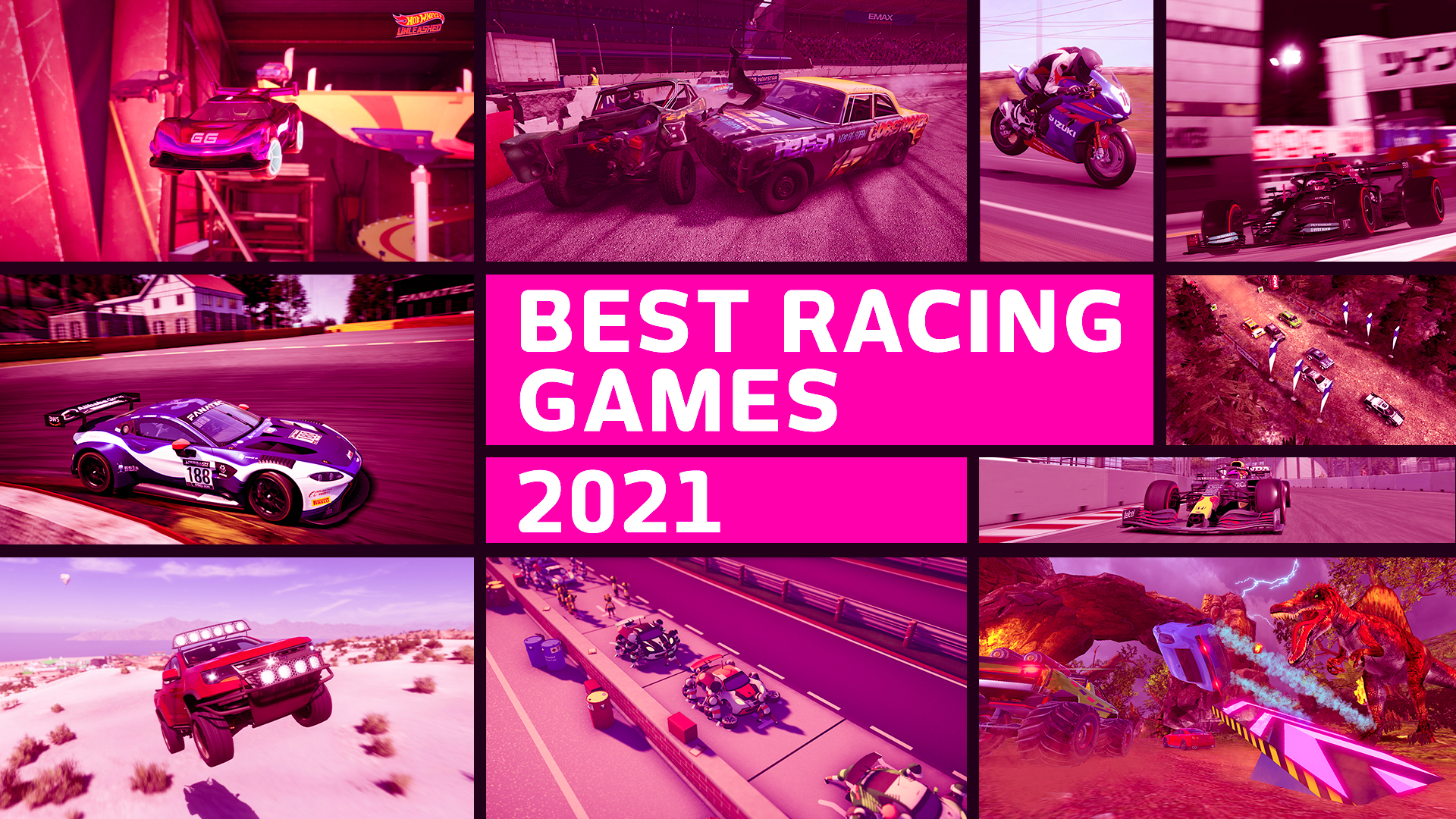 This is it, the best racing games of 2021 – a definitive list. This year has been, in the opinion of the Traxion.GG team, a stellar year for racing video games, esports and simulators. Simply, here is what we think is the best the genre had to offer across the past 12 months.

Across all platforms, including PC, PlayStation, Xbox, Switch and even a dash of mobile. Much like our editorially independent philosophy, we don’t discriminate or look down upon driving, or riding, titles for being approachable. But we also understand that focussed, serious, simulations are important figureheads.

Among the team, we’ve driven every single new release, update, port or new piece of driving content released this year. These are broken down into three, clear, categories.

Without further ado, and in no particular order, here’s what captivated our imaginations.

Hot Wheels Unleashed is the very best game Italian developer Milestone has ever made. Simple. No arguments.

In many ways, the studio had all the pieces it needed for a top-class racing game across the years. The recent MotoGP games feature impressive visuals, Monster Energy Supercross has a track creator and MXGP online racing with spectator options.

But, with the Hot Wheels franchise, there is a greater sense of purpose to tie all of these elements together.

It also helps that the visuals are truly knock-out when on a PS5, Xbox Series X or top-end PC. We’re still suckers for graphical prowess. The scratches upon the diecast bodywork, the sound of plastic wheels running down orange runways and a sense of ridiculous, child-like, fun.

We still have reservations over its long-term appeal and the grind of the Blind Box system. Ultimately, though, this puts a smile upon your face and after a long week or a super-serious sim racing session, Hot Wheels Unleashed is raucous, unadulterated, fun.

I bet you didn’t see this one coming because we nearly missed out on this too. A remake of a mobile racing game from 10 years ago, Rush Rally Origins is perhaps easy to overlook. Don’t.

Available on iOS, Android, Amazon and Nintendo Switch – with PC coming soon – the top-down isometric or chase-cam rally game is a delight, with responsive handling being the key to its moreish gameplay. It just feels so good.

Once you’ve acclimatised, you can take your off-road monster to the edge of its abilities trying to best the very competitive computer-controller rivals in races, or against the clock with your co-driver in the main Championship mode. The rock-solid frame-rate and procedurally generated tracks are the icing on the cake. A hidden gem, something that we were delighted to have discovered this year.

It was inevitable. You expected it. Of course, Forza Horizon 5 is one of the best racing games of 2021. But, in some ways, far from a foregone conclusion.

In our review, we awarded the latest open-world racer from Microsoft our coveted ‘Buy Now’ award – our top possible score.

A little overwhelming at times, currently suffering from overloaded online systems and arguably too much of a derivation from the fourth instalment, we still found its Mexican location, car collecting, accessibility and community captivating. The internal team battle for Hall of Fame supremacy still continues as we write this.

An engrossing single-player racing experience that melds the engaging nature of a diverse environment with infinite reward endorphin rushes. Bravo.

Hold up, hold up. Yes, we are well aware that more ‘realistic’ simulators are on the market and this continues to drift further away from appeasing more serious drivers.

But what’s pushed the first Formula 1 game under EA’s stewardship, F1 2021, onto this list is the Braking Point story and the post-release support.

Kudos to Braking Point for trying something new and not falling flat on its face. It’s not going to win any Academy Awards and you can blast through it in short order, but we were on the whole captivated, even delving into the facsimile Twitter feed and email inbox.

Once you have finished the narrative-led experience, then the now regular My Team mode will keep you occupied, setting the template for what a yearly racing game career should be.

This was followed by the Algarve International Circuit, Autodromo Enzo e Dino Ferrari and Jeddah Corniche Circuit venues, the first time in series history new tracks have been delivered post-release. It also helps that they are some of the best recreations the Codemasters team has made in some years.

The very definition of an arcade racing experience – because Cruis’n Blast is literally a new version of a game designed primarily for arcade cabinets.

Technically, the handling is woollier than a farm during lambing season and that theme tune nests in your head on repeat, for better or worse.

Yet, there we were, playing split-screen. One in a Chevrolet Corvette, the other a unicorn. Jumping over chasms, destroying rival vehicles and smiling while we do it.

A delightfully silly racing game that strips away any pretence – it’s upfront, daft and all the better for it.

Despite the alluring visuals, you need to think of Circuit Superstars as a simulator. There’s tyre wear, damage and fuel usage, aggressive AI rivals and a thriving online community. Most of all, however, the handling and tracks must be approached with the same practice-oriented mindset as a more traditional racing simulator.

While a little feature-light at present, already there have been significant additions throughout the year and more are set to follow, along with a PlayStation and Switch release.

Circuit Superstars got under our skin because it provides a surprising depth to the on-track action. You must study the racing lines, learn each track, out-fox your rivals and master your racing technique to get the most out of it. Not the work of a moment, but then the best things in life aren’t, either…

This year, iRacing added more than a dozen new cars to the stable, including the NASCAR NEXT Gen vehicles that will debut in 2022, a pair of TCRs, and the biggest ticketed item of the year by far, the Mercedes-AMG F1 W12 E Performance. The Formula Vee, some GT cars from Porsche, McLaren and Ferrari and a new Super Late Model were also introduced.

For track content, iRacing went hard with tracks familiar on the Formula 1 calendar. Hockenheimring Baden-Württemberg along with the supplementary Porsche Experience Center were new. The Red Bull Ring and the Hungaroring also joined the service too, while oval racing fans were delighted to see Nashville Superspeedway, Hickory Motor Speedway and a brand-new rendition of Phoenix Raceway being released.

Besides content, iRacing updated a ton of other features throughout the year. The New Damage Model was further refined, oval venues received in grip lanes for more side-by-side racing and there were also aero changes in general, mostly for NASCAR.

Make no mistake, it’s been a landmark year for members of the iRacing service.

Kunos Simulazioni’s tin-topped-racing simulator continued to evolve throughout 2021. It started the year with the long-anticipated British GT paid content pack and the laser-scanned Oulton Park, Donington Park and Snetterton were worth the wait.

After a subdued middle of the year, that included adding the 2021 GT World Challenge Europe liveries, Assetto Corsa Competizione went straight back to the top of the list for many sim racers following the version 1.8 update for PC.

Sure, there was the free BMW M4 GT3, but the improvements to the visual fidelity, force feedback, suspension control and Cinema HUD photo mode were the real stars of the show. With more cars and Circuit of the Americas coming in 2022 alongside PS5 and Xbox Series X|S versions, there are good odds we’ll be speaking about ACC here next year too.

Platforms: PC, PlayStation 4 and Xbox One

If you’d have said to us at the start of the year that retro arcade racer Horizon Chase Turbo will return to prominence in 2021 with an Ayrton Senna-themed tribute, then we would have claimed to be Alain Prost and wished you bonsoir.

And yet, that’s exactly what did happen. Senna Forever was a delightfully charming recreation of the three-time world champion’s career – except within the Horizon Chase Turbo physics and aesthetic.

As you boosted and fuel saved your way through cartoon recreations of Monaco and Spa-Francorchamps, you unlocked new chapters and cars from his storied career. Joyous. We were overwhelmed with detail, charm and passion injected into this project, and the proceeds will be donated to the Instituto Ayrton Senna educational programs.

With how fresh the PS5 version of Wreckfest felt this year, you’d be hard-pressed to tell that the game’s origins are rooted in 2014. But it’s true, the ‘Next Car Game’ really has been kicking around for that long in one form or another.

But, after years of constant tweaks, updates and Tournament additions, seeing it run so smoothly and beautifully on Sony’s latest console almost made us weep. Until, that is, we played a round of Last Man Standing with friends, and the weeping was replaced with tears of joy.

In the months following, the Xbox Series X|S also received the new version natively and those with a strong enough PC could also see the new lighting. It may be an oldie, but it’s (still) a goodie.

As you can tell by the number of articles, videos, streams and social media posts, the Traxion.GG team is a big fan of dune’s art of rally. It tickles our inner bobble-hatter.

But, more than just a rally nerd’s nostalgia trip, the unique design, thumping score and hidden-item strewn open-world levels continued to enthral us long after the novelty of the thoughtful car and driver names had worn off.

The game reached PlayStation and Xbox devices, plus the Nintendo Switch this year, but it’s the PlayStation 5 and Xbox Series X|S versions specifically that successfully transport from PC this love letter to rallying in all its glory.

Sometimes when a game receives an updated version on new hardware, it’s like a fog has lifted and you can see the game for what it really is. In the surprising case of Ride 4 – a motorcycle racing game where the collection of bikes from throughout the ages is the core experience – playing the PS5 and Xbox Series X|S version cast new light on an underrated game.

Long before the viral videos showcasing its graphics, we reviewed the new version and were impressed not just by the uplift in visuals but the minuscule loading times and DualSense feedback.

The single-player career is massive, so being able to zap between each mission was a relief, and the motorbikes remained as varied as ever. Hot Wheels Unleashed wasn’t the only worthy racing game Milestone released in 2021…

Vote for the overall best new racing game of 2021

Voting is limited to one per reader and closes on the 22nd December 2021. So, get voting, choice wisely and spread the word!