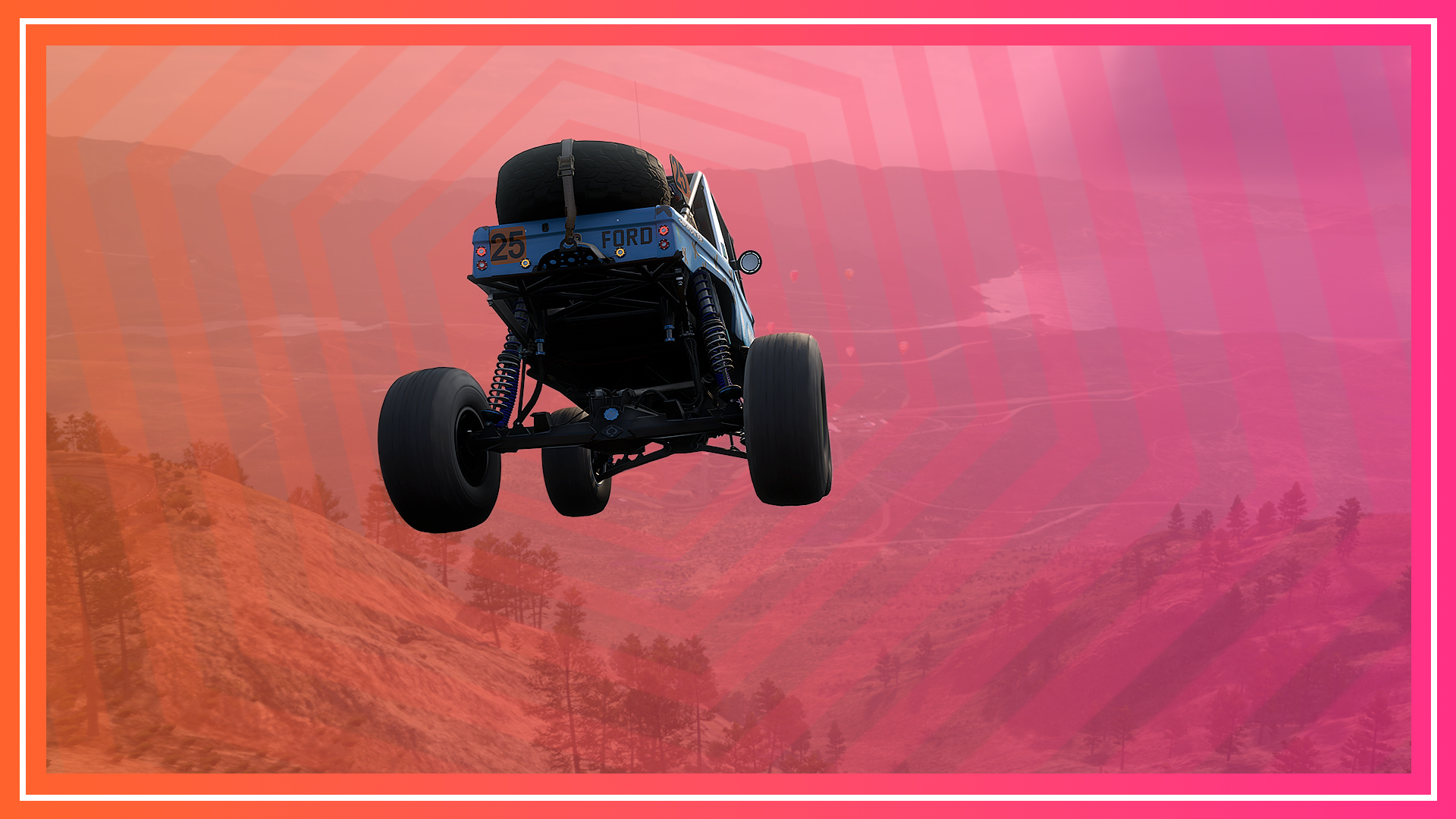 I went to the cinema recently and upon asking for a small drink, I was scornfully dismissed. “Pah! We only do medium, large or extra-large” was the response. Oh, silly me for only having a moderate thirst.

Medium it was then – which is still gargantuan. When did ‘medium’ get so plus-sized? Still, despite having in my possession too much fizzy drink, by the end of the movie the container was empty and my bladder was at bursting point so it did the job.

In many ways, Forza Horizon 5 is the same. The largest map for a Horizon game ever is almost too much to handle. It features the longest highway in a Horizon title and the volcano is the highest point ever seen in a Horizon release too. The spec sheet reads like an Apple Event comparison chart where Tim Cook compares the number of megapixels in the latest iPhone vs the first-ever model.

If the sheer enormity of the environment doesn’t intimidate you, the number of challenges, events, experience bonuses, points and options popping in your face certainly will do. Upon starting the game, you can’t help but think that you actually can have too much of a good thing.

As you progress, however, you’ll soon find the game’s natural rhythm, find a flow, and be enveloped in one of the richest driving experiences yet.

Yes, this is an open-world racing game, and yes there are cars and races to compete in. The basics remain in many ways the same as ever. But five releases in, and the game has added more layers than a kilo of onions.

There’s the main story to complete, incorporating Showcase events and the new Expedition adventures. This isn’t linear and sits alongside a whole host of themed racing series to take part in. As you explore the area, you are gaining XP for partaking in PR stunts and hidden Barn Finds crop up on your map.

Also appearing will be Drivatar rivals you can challenge on a whim or real humans playing online in your world and requesting events via Forza Link. Then there’s Forza Arcade that implements cool online team events, like smashing Piñatas or achieving a cumulative drifting score. They start on a regular basis throughout your day and also emerge on the map.

I haven’t yet mentioned the Super7 card challenge game, Festival Playlist monthly events or the online battle-royale Eliminator, all carried across from Forza Horizon 4. Or the Wheelspins and Super Wheelspins unlocked through level progression. Or the Horizon Tour that groups together several events for an online championship with up to five other players.

Co-op. I forgot the co-op. It means a regular single-player race event can become a network-connected team event.

Oh wait, there’s EventLab too. Here you can create and share, or simply find, fun levels that seem to always involve bowling pins in one way or another in an attempt to recreate something like Trackmania’s Royal Mode.

All the time, you are earning cash to buy houses with, or cars, or clothing for your avatar. There’s a new Car Collection Panini-aping metagame. You unlock new horn sounds. You can tune your vehicles. Paint your vehicles. Sell your vehicles in a live auction. Take pictures of them in photo mode.

There’s just so much to do and you can’t move a single millimetre without some kind of number scrolling, pop up, radio DJ or phone call. It. Never. Stops.

On paper then, you have the most feature-complete racing game of all time. Every box is ticked. But it can be overwhelming and if you’ve never played a Horizon game before – as I’m sure many of those with Game Pass will attest – most of what I’ve said already will sound like a different language.

A concerted effort has been made to reveal each element to you over time, bit by bit, the speed of which is still a little too fast. I think you could easily lose track of what each element does and your priorities if you aren’t already part of the Horizon cognoscenti.

I appreciate the need to try and hook you in immediately, and if you simply play the first four hours you’re going to be more excited than an eight-year-old after a tube of M&Ms, however, you can get a little lost.

Only a little, though, and that’s a marked improvement over the previous FH title three years ago.

My main bugbear with the fourth instalment was the rapid progression, as within 90 minutes I already owned a Koenigsegg and that could win nearly every event in the game. Then, though, I felt the main goal was often car collection.

Here, while that is still a key element and I was given a Supra, Bronco and a Corvette within the first five minutes, Horizon 5 heralds genuine, satisfying, progression thanks to a set campaign.

A lot of the talk ahead of launch by Playground Games was about an expanded story, and how it takes you through Mexican culture. All of that is true. It’s bigger and faithful to the region. However, I still didn’t care for the characters one iota. When going back to a mission, I still can’t skip a cutscene pre or post-challenge – something our very own Justin Sutton will be very disappointed about.

These niggles don’t really matter though. I’m not playing a game like this and expecting a Sofia Coppola level of scene-setting. I’m here to drive fast cars into trees, and at least this time the game has a clear sense of purpose – to reach the Horizon Hall of Fame.

Along the way, you complete various story missions such as the Vocho segment, a tribute to the Volkswagen Beetle that was produced in Mexico until 2003, reaching over 21 million units sold.

There is one main Horizon Festival base, but joining it are five themed outposts. To unlock these, you earn one unlock point after a pre-defined level of XP is accrued.

Within each outpost is then a set of stories, a Showcase or Expedition event and a grand finale race. Each is another subsequent unlock point to open up, but don’t have to be unlocked in any order. This creates a structure over and above the regular circuit racing or speed camera tasks and it’s this incentive that means Horizon 5 is truly the first title in this series with an overarching goal.

One of the best new mission types is the Expeditions. The format includes driving to set locations while a character regales you with tales of Mexico, every third word is seemingly ‘vamos’, or trying to find items in a sealed-off area in much the same fashion as that middle bit in Uncharted: The Lost Legacy.

The deeper missions with more varied structures and a progression system combine to create an over 20-hour narrative-led racing experience. It’s just that as an added bonus, you still have two years of unlocking everything, buying all the cars, playing online with friends and achieving three stars on every drift trial still to come.

A marked step change, and a welcome one. Quantity isn’t everything, FH5 isn’t enjoyable simply because there’s a lot of it. It’s enjoyable because the chapters are considered and make the best use of the location.

I haven’t even talked about the cars yet, but in truth, these take a backseat this time around. They look good, sound satisfying in a slightly overly amplified fashion, and the handling is sweet. Being able to thread through traffic at over 200mph or sliding across a wet field with only a gamepad is no mean feat in programming.

No, the main star is the environment. That is stating the obvious as right from the start this is less a driving game and more about exploration. Apparently, the individual needles are rendered on each cactus, there are over 2,000 sky presets and the murals painted on several buildings celebrate Mexican culture.

All I know is that smashing through a wall is as satisfying as ever and this time I’m doing it in a more varied world, brought to life by vivid colours, dynamic weather and distinct regions.

Again, I’m here to nitpick and say it somehow doesn’t quite feel as large as you expect once you have acclimatised. When you’re flying down the side of a cliff, through a jungle and onto a beach within mere minutes of each other, then that irk soon dissolves.

The planning that has been undertaken to make the narrow streets of Guanajuato, damp trees of the rainforest and the Baja-style dunes feel like one cohesive, miniaturised, facsimile of Mexico is mind-boggling.

You will be constantly surprised, distracted and all agog. The appeal is far from ephemeral, something that could be said of previous franchise instalments. There’s a sumptuous world, an abundance of shiny automobiles and a seemingly unending stream of tasks to complete.

Most importantly though, this is the first Horizon game in my opinion with engrossing progression and I think that makes it by far the best instalment yet. But that poses a crucial question – where on earth does this series go next?!

Forza Horizon 5 is released on Tuesday 9th November 2021 for PC, Xbox One Xbox Series X|S. It will also be available as part of the Game Pass subscription. If you’d like early access, you can purchase the Premium Edition, and that’s available in the same places on Friday 5th November. If you have Game Pass and would like early access, you can buy the Premium Add-Ons Bundle on top of your subscription.

Full disclosure: A code for the game was kindly provided by the publisher for review purposes. Here is our review policy.