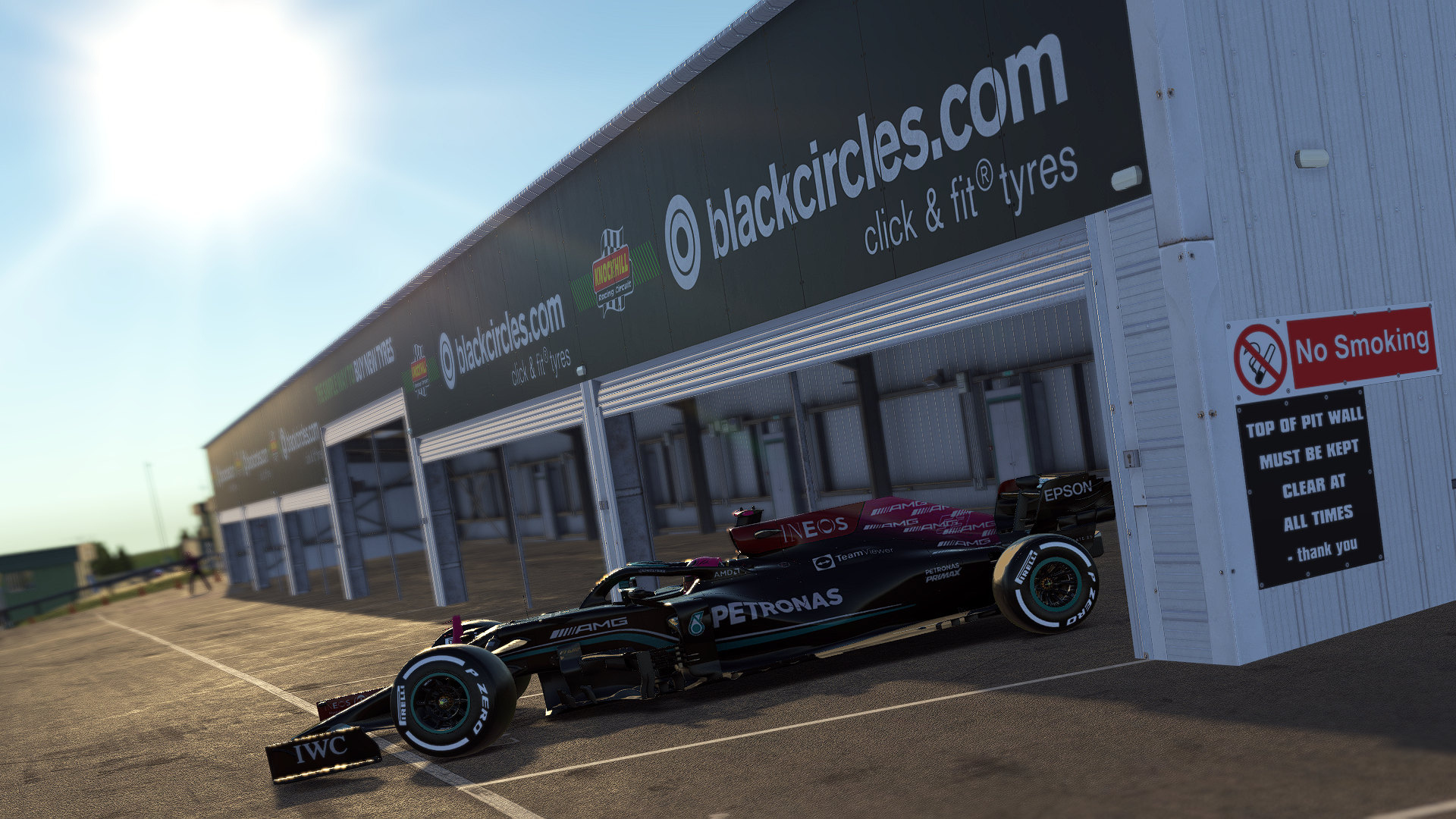 After a longer wait than expected due to the Amazon Web Services failing during the build implementation, iRacing members were finally able to purchase and race in the Mercedes-AMG F1 W12 E Performance on Tuesday. The highly anticipated car, which has been a force to be reckoned with in the 2021 Formula 1 season, will be retired after this weekend’s season finale at Yas Marina in the Abu Dhabi Grand Prix.

Mercedes driver and seven-time World Champion, Sir Lewis Hamilton, goes into the championship finale this weekend tied with Red Bull Racing Honda F1 driver Max Verstappen. The Mercedes-AMG Petronas F1 Team leads Red Bull by 28 points in the Constructer’s Championship. The W12 E Performance could wind up as the Drivers and Constructors Championship winner in less than a week’s time.

iRacing struck a deal with Mercedes-AMG Petronas F1 Team to bring both the 2021 car and the future 2022 build to the service. On Monday, the car was finally announced to release in the 2022 Season 1 build. As soon as I could, I dropped some cash on all of the new content. I hopped around a few online servers and got to picking apart the W12 the best that I could.

Simply put, this car is good.

Check out the pictures below and go buy it right now. The end.

OK, I’m joking, there is a bit more to it than just that – there is a lot to cover with this car. While I’ve recently stepped into F1 fandom for the first time in recent years, this car is still a huge deal to me and I want to learn all of its secrets.

Between DRS, ERS, MGU-K, and all of the other finite details, it’s a work in progress trying to figure everything out for sure. High-level iRacers jumping on this car will have a lot to figure out, and that’s all way above my head. Here’s what I’ve been able to pick up on after a few hours in iRacing’s newest virtual toy.

If you’ve driven the Dallara IR-01 on the iRacing service before, you’ll know how much less involved that car is on the setup side than many of the other vehicles you can drive. This open-wheel car is way more involved. It will take more time to learn the nuances of each click in each column.

Besides the intricate details, the multiple tire compounds, with the Pirelli nameplate on the tire walls, are able to be selected between. As it is on other Formula-type open-wheelers, red tires are soft, yellows are medium, and whites are hard. Soft reds contain the fastest speed but will not last long. The hard compound will last longest but will not have the fastest speed off the line.

The service comes with some track-specific setups for some tracks. There are also low, medium and high downforce setup options for use at most other tracks. I’ll be honest, that’s about all I know about the setups. There is a great new feature in the garage that allows the center part of the halo to become transparent for better vision (Transparent Halo) so I checked that as well no matter what setup I put in.

Moving into the cockpit, there are some in-car adjustments to be learned. A lot of these options on this page are able to be mapped to specific buttons on a wheel. In this instance, it came in very handy to have a Fanatec Formula V2.5 rim. Honestly though, the options such as the Motor Generator Unit – Kinetic (MGU-K) in these hybrid cars have me stumped. I’ll be keeping my eyes on iRacing’s user guide page to see if something drops soon.

The Drag Reduction System (DRS) feature is implemented in this car, where it should work the same way it does in real life. That much I know, thanks to F1 2021, that there are detection zones and zones to implement it. The rear wing opens and everything. While that’s not new to iRacing, it is still a welcomed sight and something to practice getting used to.

Back to the Power Unit, the MGU-K has five different modes it can be switched to while on the track. No deploy, Qual, Attack, Balance and Build. Engine Braking modes can be swapped, and the best part is that these adjustments all show on the big screen of the rim. I wonder if the Thrustmaster SF1000 is integrated properly with this car? I know it works for iRacing in general, but man, that would be cool to not even have to worry about seeing it virtually on screen.

My point is that for someone uninitiated and a casual player on F1 2021, these settings are a bit intimidating. It still feels great to drive even without knowing what each thing does. However, if you get into a competitive setting against others online, you might want to look into getting this all down to stay towards the front.

Per Trading Paints, the agreement between iRacing and Mercedes means no custom paints will be supported outside of the in-game system. That means no template will be available. It also means that if you manage to come up with something anyway, it won’t be able to be uploaded to Trading Paints. I also noticed that when TP was on, my custom helmet and suit were both removed. Not sure if that’s intended or not, but that’s how it stands as of Day 1.

The in-game livery creator provides some minimalistic looks with a few basic schemes. If you want logos on the car, well they have to be the Mercedes-AMG Petronas F1 Team logos. You’re also limited to only changing one colored area of the car, and only to the handful of colors they picked for you. If you don’t mind a sponsor-less car, it’s a bit more customizable and you can get your proper colors. However, there are only a few base schemes to go through and you’ll be limited to three color codes.

This isn’t out of the ordinary. On the licensed Formula 1 games, you get no customization of any of the official liveries. On Gran Turismo Sport, the custom option is a sticker-free colored car. There are likely tons of legal issues with having custom schemes. Nobody at Mercedes wants to log on to iRacing and see someone with a Red Bull livery on their car. It makes perfect sense in that regard. Still, I’d expect there to be some community work towards figuring out some custom options.

DRIVABILITY AND OTHER NEAT FEATURES

I’ve spent a decent amount of time on F1 2021 this year, and I have to say that I’m getting some pretty similar vibes on the handling side. It is both easy and difficult to handle at the same time, if that makes sense. When you’re on the right line and hitting apices correctly, it’s as smooth as butter. Proper throttle control coming out of corners to avoid spinning is important.

I’d argue that since the game is purpose-built for Formula 1 racing that you can get the most out of F1 2021. However, what iRacing brings to the table for the full simulation side of the world, the W12 is detailed.

I have seen some people in the forums asking about certain features. Honestly, I think let’s get the Red Bull, the Ferrari, the Aston Martin, and all of the other Formula 1 cars on iRacing and do a proper Esports simulated series. I think it can be done. Not to say that the current F1 Esports series isn’t great as it is, because they are truly entertaining and the drivers involved are beasts at that discipline.

I just think that iRacing has a great esports platform already, and this would be a great step forward towards an idea like that. However, I don’t think that will ever happen, but it’s wishful thinking.

One element I love is the sheer beauty of capturing the car photographically. It looks fast standing still, but using the iRacing camera tool and motion blur, plus having the W12 in the right conditions, you can get some amazing looking views. With the proper weather conditions and at the right speed, the W12 produces aero vortices from the trailing rear wing. Get the car to top speed while attacking and you can get the floor to meet the pavement and shoot sparks out from underneath. It is a sight to behold.

Another added feature that comes with this car but also was implemented on other cars is visual Tire Delamination. It’s what iRacing calls a Tire Scrubbing Effect in its patch notes. When you pull out of the pits on a fresh set of Pirellis, the tires look shiny and smooth. Give it a few seconds, and you’ll notice a dull line starting to form.

As the run goes on, the shine goes away completely. Per the new build notes from iRacing, “highly cambered tires will appear rough in areas that touch the racing surface and remain shiny in areas that are raised,” which means that you can see how a setup is visually wearing your tires through a run. That is next level for iRacing.

WHAT COULD THIS LEAD TO?

Putting on my speculative hat for a moment, I don’t think this will be just another car on the service. I believe that iRacing will work out a way to have it be a part of their ever-growing lineup of simulated esports. I also think that this car could be the key to implementing rain racing properly. It’s about time iRacing introduces wet conditions with some green or blue walled tires into the mix.

The introduction of this car is huge for the service in general. While it’s not the first Formula 1 car on the service, it’s definitely the most renowned. This could lead iRacing to step further into the world of F1 with maybe some more tracks from the schedule. I don’t know how they could, but it’d be nice to see places like Monaco or Yas Marina on the platform.

Overall, this car is a fun drive for even the slowest of drivers, myself falling into that category. I expect to get a lot of use out of it in the coming weeks and months. It’s a shame about the customization limitations, though. They did get a pretty close pink to the Traxion pink, which I was elated to see. There will be a lot to unpack in the coming days and weeks to get the most setup-wise. I’ll leave that to the professionals, honestly, and I look forward to seeing how things move forward.