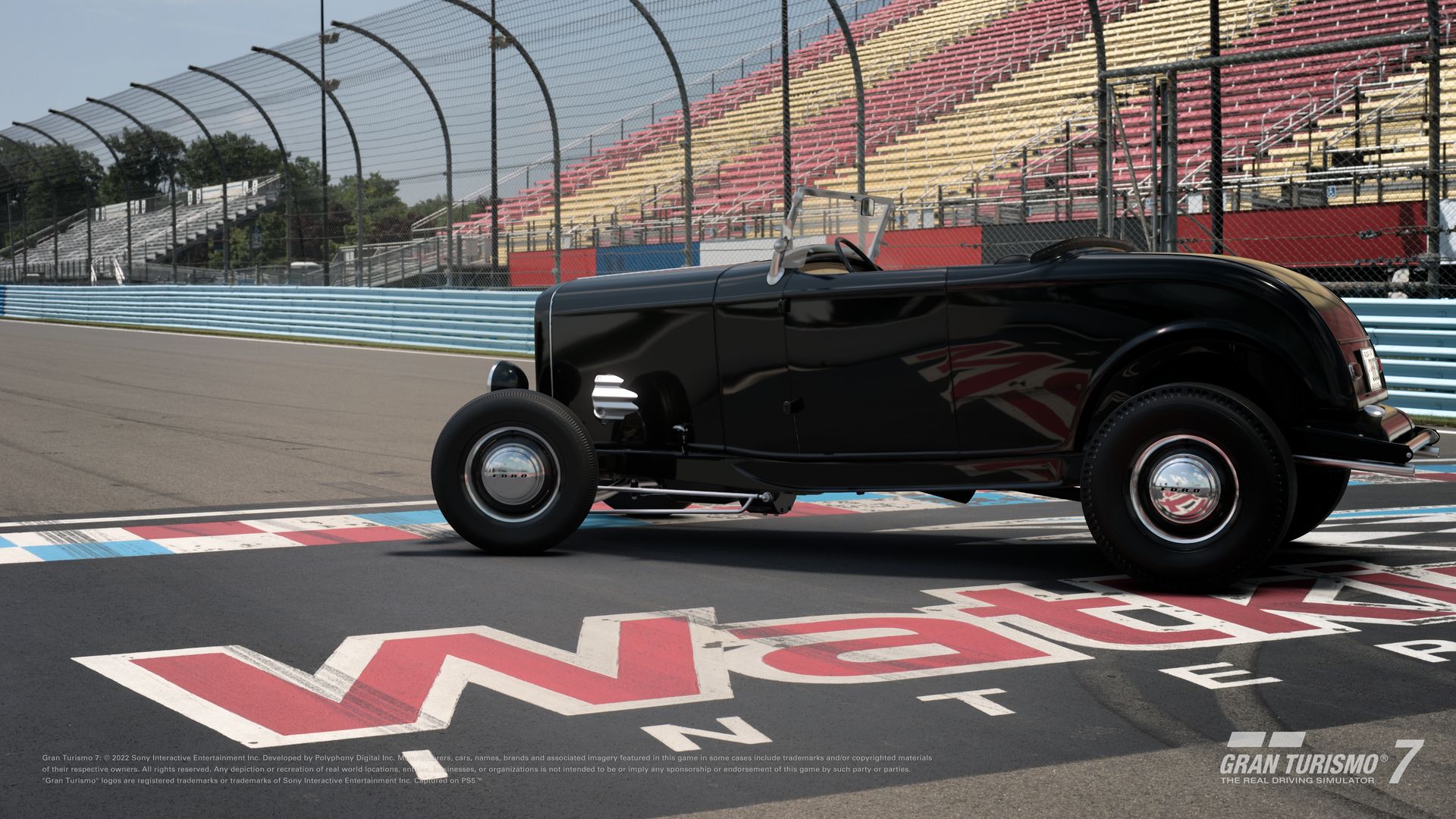 A lot is being pinned on the next Gran Turismo 7 game update, and it seems like the wait will not be for much longer, as it launches 23rd June.

Not only will it include three new cars, but a brand new real-world circuit – Watkins Glen International.

We also expect a Server Maintenance notice soon, stating that the title’s servers, and therefore network-connected functionality, will be offline between 6 am – 8 am UTC / 7 am – 9 am BST this Thursday.

This is the first true new venue, following a Spa-Francorchamps variation in April, to arrive following Gran Turismo 7‘s launch. No, it’s not Grand Valley Speedway, but something (to me) far more intriguing.

Both the ‘Short Course’ and ‘Long Course’ will be included, the latter including ‘The Boot’ section. It looks as if the ‘Inner Loop’ chicane on the Back Straight is mandatorily in use for both layouts. Images of the track will also be added to the Scapes photography section.

Interestingly, the venue was updated for the iRacing service in November 2021 and will be part of a USA-themed DLC pack for Assetto Corsa Competizione on 30th June.

Alongside the additional circuit are three new cars, as is the trend for the monthly Gran Turismo 7 content updates so far.

These follow a teaser tweeted by series producer Kazunori Yamauchi on 19th June. We speculated that two Suzukis and a Ford will be joining the car roster, and this indeed turns out to be correct.

Nobuhiro ‘Monster’ Tajima used this epic beast to compete at the Colorado-based Pikes Peak International Hillclimb between 1996 and 1999 – although he never won the event in this particular car.

The bright red vehicle rose to prominence in 1999’s Gran Turismo 2, where it was often cited as the ultimate car in the game once tuned to its maximum. That game also featured the torturous track, with the event taking place this coming weekend on 26th June 2022.

Just a shame that the venue isn’t in Gran Turismo 7, yet…

Anyway, moving on, this is a classic open-top American vehicle, initially known in its first year of production as the ‘Model 18’ and features a 3.6-litre V8 with a whopping 65 bhp. No doubt some fettling will soon change that, however.

If one Suzuki wasn’t enough, here’s another. This time, it’s a race-modified version of the Suzuki VGT roadster that arrived in May’s update, pairing a motorcycle engine with a hybrid system.

It now means that the brand has both a Gr.4 and Gr.3 machine available.

Next, I’m hoping for a second-generation Swift Sport (AZG) to complete the Suzuki lineup, but only because I used to own one. Here’s hoping for July…

Following the addition of the first post-release Café expansion in May, three more will be added to the central ‘career’ mode of sorts through the 1.17 update. They are as follows:

Exact race lineups and rewards will not be revealed until the morning of the update.

This update could be significant for the Gran Turismo community. Earlier this week, after many requests, one of the ranked Sport Mode Daily Races re-introduced vehicle tuning. Now there will be a new circuit and a further expansion of the Café.

Online functionality will be a key talking point, however. While the Sport Mode races continue, the public and private lobbies have been disappointingly barebones and unstable. Here’s hoping we hear more about the plan to resolve these issues sooner rather than later.

Let us know in the comments below what you’d like to see in the next Gran Turismo 7 update and we’ll be back with the full patch notes on the 23rd.