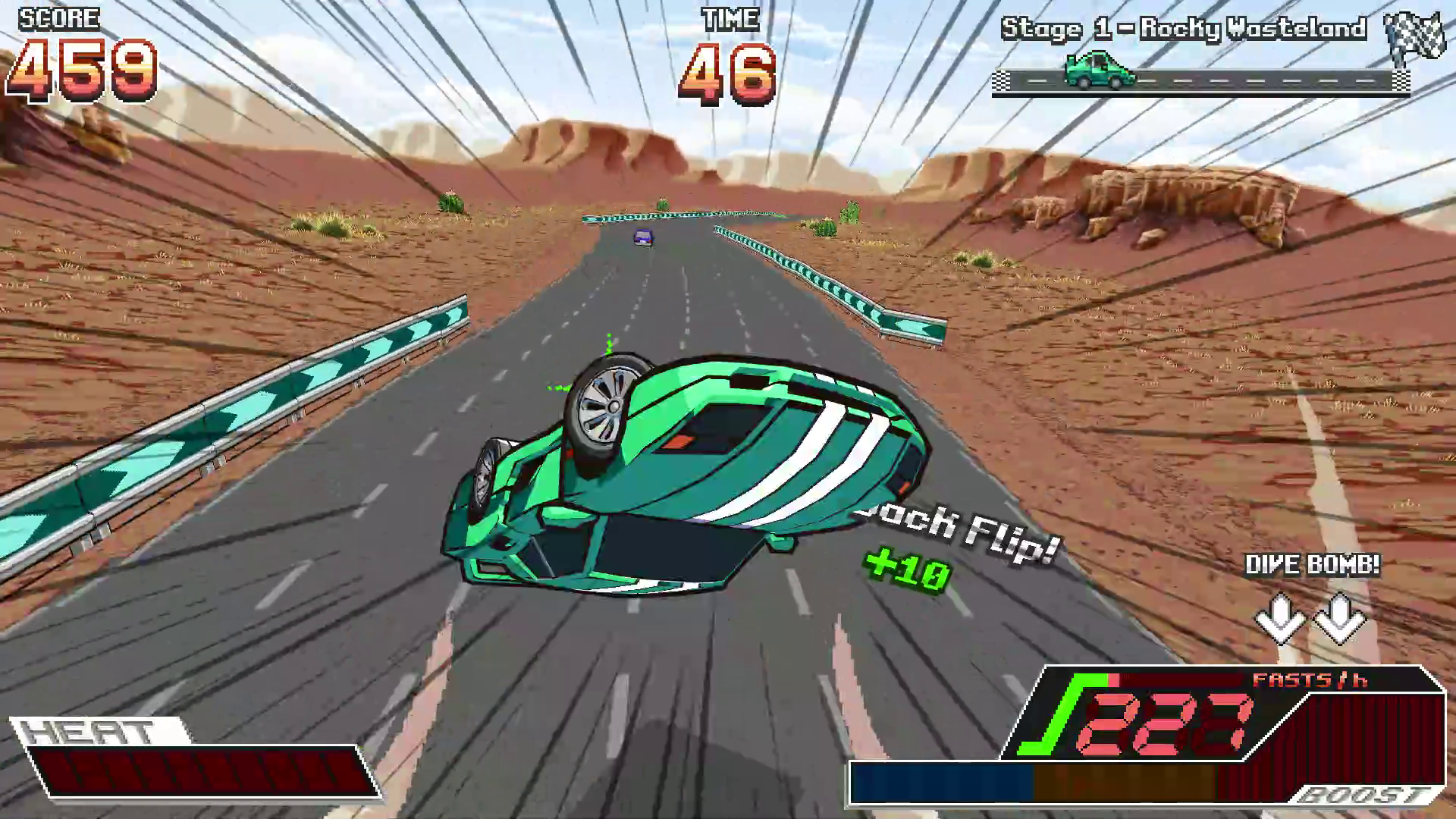 There’s plenty of fun to be had with classic retro arcade classics. Outrun, Chase HQ and Hang-On to name but a few. They all follow the same style of driving that puts you on endless roads against the clock to avoid the traffic and make it to the next location.

Buck Up And Drive! aims to tap into that nostalgia. It merges all that Outrun provided us in the late ’80s and early ’90s with an anime Initial-D-style graphical palette. Then it lets you loose on procedurally generated stages to perform a mixture of stunts, trying to reach the end of the stage before the time limit is up.

The demo, now available on Itch.io, drops you straight into action across two modes.

The main mode features stage driving but without a proper tutorial to guide you through, it took me a while to realise that driving isn’t really what makes you go fast. It’s stunts. Whilst you’ll need to steer to avoid the traffic, you’ll be capped at 200 ‘fasts per hour’ unless you pull off some trick moves.

Ramps are everywhere and when you fly off them you can backflip, forward flip, hulk smash down on traffic and do all kinds of crazy moves. Corners have barriers for you to land on and grind like a skateboarding game. Using those same barriers, you can drift and graze along too for a speed boost.

It’s an anime cel-shaded racing game so naturally, drifting is everywhere. The way Buck Up And Drive! handles drifting is unique and I’m not entirely sold on it. Yet. When you hit the drift trigger, an eight arrow direction map pops up around your car. Different arrow combos appear to trigger different drifts and stunts.

The current demo appears to favour the D-pad over analogue control as the stick is so sensitive, it doesn’t appear to register the diagonal movements. Use the directional buttons and the mainstay sideways move – ‘Hurricane Drift’ – provides a huge boost. There’s clearly work to be done on the controls as the game progresses.

Whilst the game is clearly an arcade adventure, it is also very strict. Only once did I make it past the first stage because the time limit requires absolute precision. It feels a little at odds with the crazy stunts and over-the-top nature the gameplay provides.

You can drive on the moon but can’t afford a single crash into traffic? It feels a little strict for a game that goes out of its way to be reminiscent of simplistic arcade classics.

It is, however, chaotic in a good way. Another enjoyable gameplay addition that creeps in is police heat. As you bump more traffic, your heat meter increases and if you continue to cause traffic problems, the police arrive. The game then takes on a Road Rash feel as you try to evade them.

The last quirky addition to the demo is a bizarre 1v1 battle mode. Here you’ll be drift steering into each other to cause health damage like a fighting game. You can smash into each other, jump over your opponent or try to land on them. Silly fun for five minutes to unwind with.

What Buck Up And Drive! does right is get that retro arcade feel into its core driving gameplay. The steering is fast and responsive, while the aesthetics are bright and colourful. The sound is vibrant and full of synth hair rock too. It runs smoothly at 60fps and does give me some 90s arcade park feels when it all comes together.

It is less racing orientated and more Tony Hawks on rails than I imagined and that reminds me a little of the fantastic Tanuki Sunset. There is clearly work still to do so that the stunt side of things is more accessible but the foundation for something fun is here.

You can follow the progress of Buck Up And Drive! and download the demo over at Itch.io.