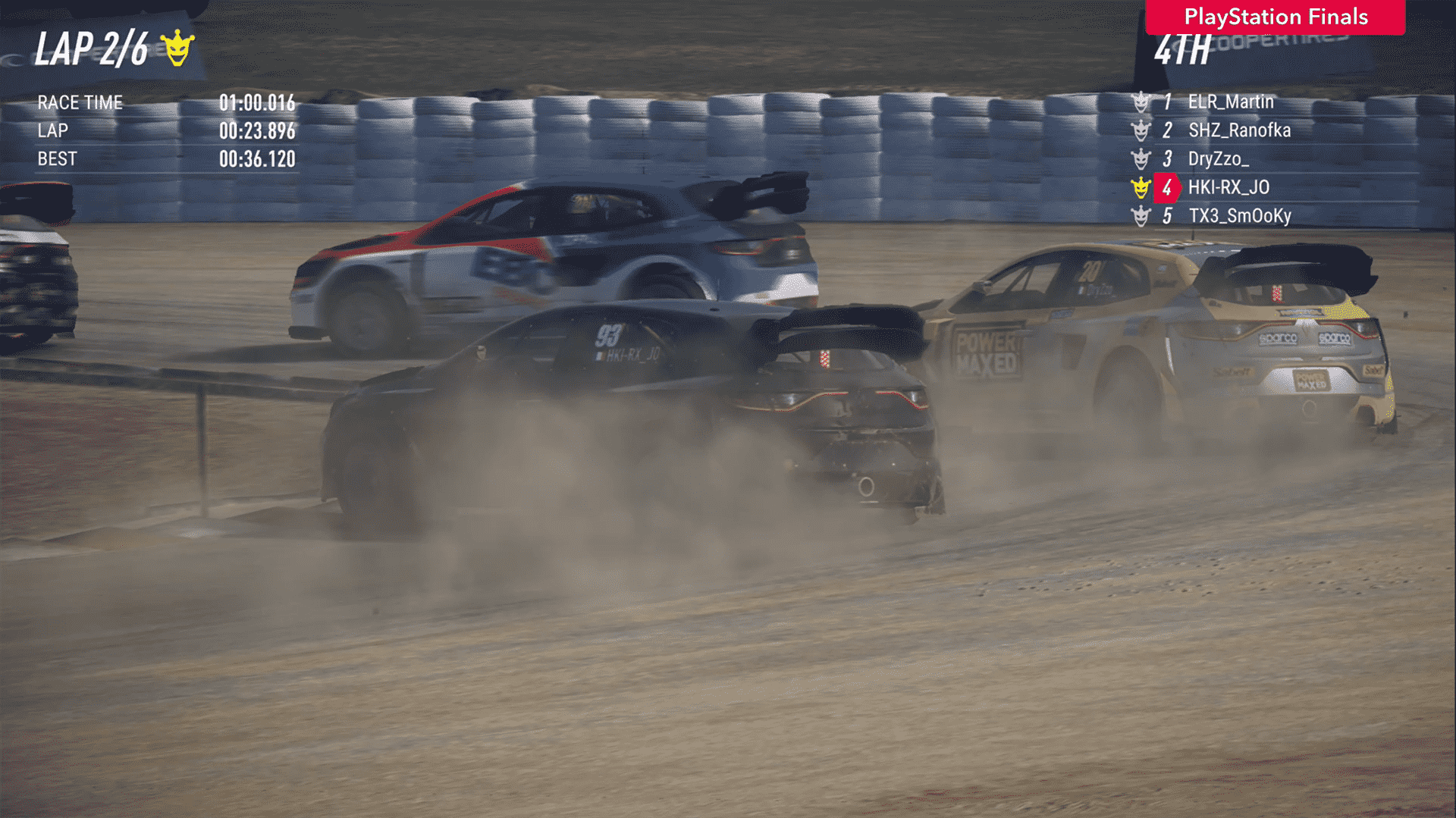 With 8 returning players across all platforms who have missed out on QF1 and QF2, they will be hoping this is 3rd time lucky as we look back on the action from the final Qualifying Final for Rallycross, and the last opportunity to bag a place in the Semi-Finals. With only the top qualifier going through from each platform, it was all to play for.

Barcelona would host the Xbox competitors, and it was all French grid who kicked off the action in their Volkswagen Polo’s, again proving to be the most popular RX1600 in the game.

The challenging wet conditions didn’t look to suit the RX1600’s, however, Luc Fournier used all his experience to gran two wins in Qualifying 1 and 2 to start the final on pole. Even after a disconnection in Q1, Néo Rivallant came back with two strong finishes in Q2 and Q3 to give himself the best chance starting P2 alongside Luc.

The final got underway with a chaotic first lap, all the competitors scrambled for the apex of turn 1 going onto the main track, but it was Lopez Ludovic who seemed to lose the most exiting the corner P5. However, carrying more speed into the second tight right-hander, he found a gap and with seemingly more grip passed the field and came out in front. A small tap on the rear of an already crossed-up Luc Fournier unsettled the car even more and put him into a half spin leaving him trailing the field.

With nothing to lose, Fournier dived for the joker on lap 1, hoping clean air would give him the undercut. And it looked to be the case as upfront Néo Rivallant and Ludovic were battling hard and losing themselves time. Feeling he had the pace, Rivallant then opted for the joker on lap 2, but such was the speed of Fournier, had to drop him behind him.

Not for long though, as on the next turn and carrying much more speed, Rivallant sent an audacious move up the inside, bashing doors with Fournier, but securing the place. The battle was intense between these two drivers, but came to an abrupt end just half a lap later going into turn 9 when an aggressive Rivallant appeared to position his car so Fournier made contact with the barrier. The controversial move landed Rivallant a 20 second penalty which was applied post-race and ultimately ruined his chances of qualification.

After another hit in the barriers, this time un-aided, Fournier retired from last place leaving Lopez Ludovic to come home in first after a great drive and qualify for the Semi-Finals.

Next up was more front wheel drive action in RX2 machinery from Holjes, Sweden on Steam. On the platform which generally provides the closest racing, the qualifying races proved that with tightly packed and consistent grid. Returning for the 3rd time, Sulyvann Pelletier started as he meant to go on with 2 wins landing him TQ for the final, lining up alongside John Bebnowicz-Harris who secured 3 2nd place finishes in qualifying.

Making full use of his pole position, Pelletier leapt into the first corner while 3 cars behind went wide and into the gravel. Holding back only slightly and carrying much more speed through T1, Tomas Åberg went for the joker and somehow managed to come out right on the tail of the pack.

With a steady 2 second gap to the field, Pelletier decided it was not worth the risk staying out so took the joker on lap 4, still managing to come out ahead of Bebnowicz-Harris by just over a second.

The final 2 laps were tackled at a consistent risk-free pace for Pelletier who brought it home for victory ahead of Bebnowicz-Harris booking his place into the Semi-Finals.

The last platform to race was PlayStation who were onboard the RX Supercars tackling a very fast and dry Loheac track. Putting on a dominant performance in qualifying was Martin Limou, 2 victories and a second place puts him firmly on pole position for the final. After a 3rd in Q1 and then retirement in Q2, Sylvain Laville would start up alongside after missing out in Qualifying Final 2.

The final saw the majority of the field get away cleanly apart from Sylvain Laville who bogged down massively from the line and was nearly 4 seconds back by the middle of lap 1. Meanwhile a close battle ensued between Ryohei Iwami and Martin Limou going side by side round turn 1 and into turn 2. Pulling the pin early, Marie Luce Valentin took to the joker in an effort to get himself clean air and pull back the ground lost to the leaders through the first sequence of corners.

It was Iwami to joker next, anticipating the threat from Valentin and covering it off well coming out just clear. Iwami now only had 1.5 seconds to Limou to close down in 3 laps.

But just as Iwami closed his threat, as did Limou, diving to the joker on lap 4 not electing to try and pull away but to try and conserve and protect the lead he had built. And so it proved the winning move, with Iwami catching only 0.1 seconds a lap it was not enough to catch leaving Limou to cross the line 1st and into the Semi-Finals.

The latest 3 qualifiers will now join the other 12 players to fight it out again later this month in the Semi-Finals in more close and exciting racing until we have our 6 finalists. The Semi-Finals will take place at the same time on Saturday 19th December.