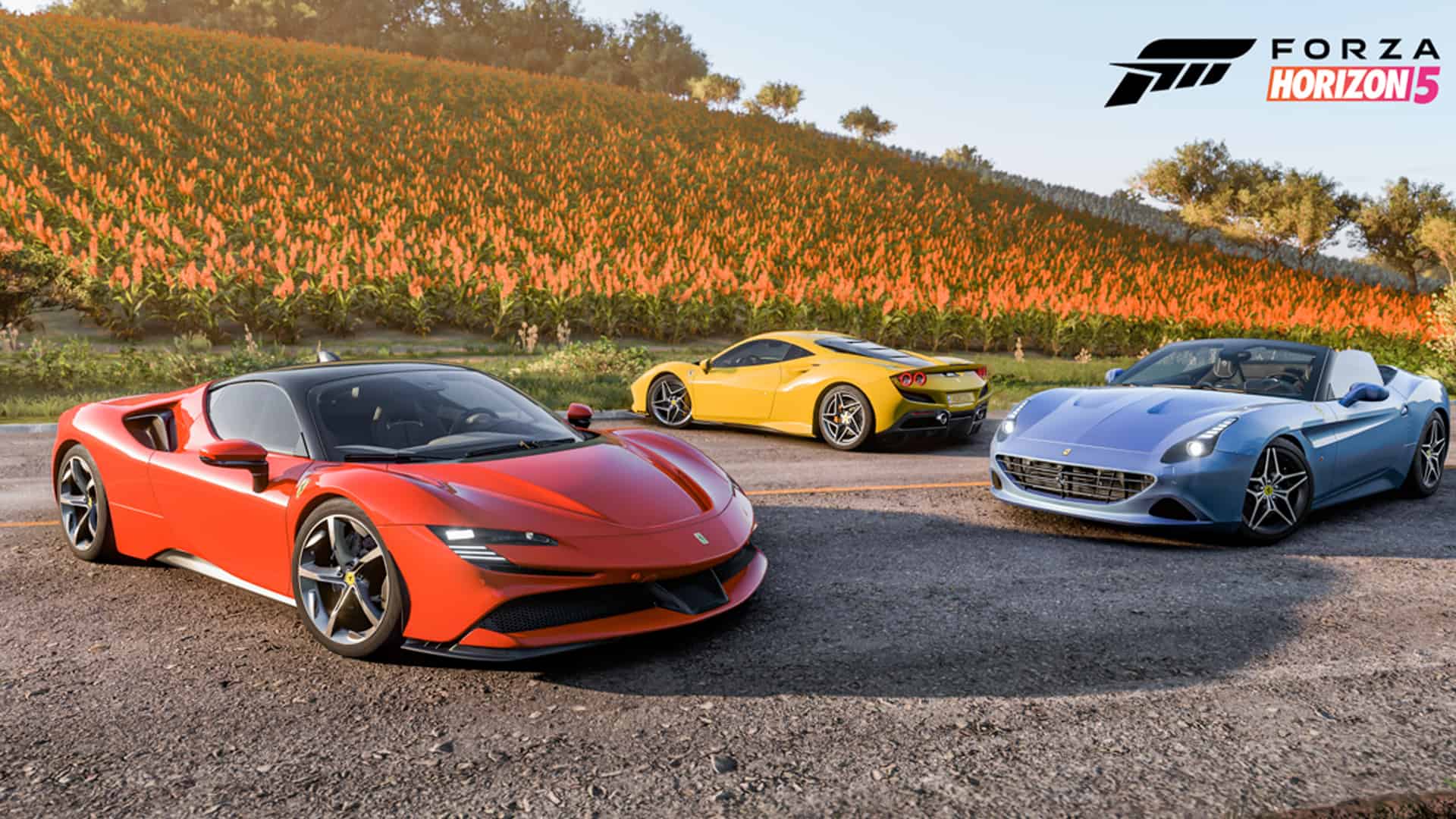 The seventh series for Forza Horizon 5’s Festival Playlist is nearly here. This is your full run through of the new Ferrari cars to unlock and new challenges to complete.

A new Festival Playlist Series is about to land in Forza Horizon 5, providing four weeks crammed full of new challenges, points to earn and cars to unlock.

The main theme this time around is Cinco de Mayo, a Mexican celebration on the 5th May remembering the Battle of Puebla where the North American country beat the French Empire.

There are also five new Ferrari cars to either unlock through the Festival Playlist, which will begin on Thursday 28th April 2022. Here’s your rundown of what will be included.

The 986hp Ferrari SF90 Stradale plug-in hybrid leads the way for 80 points in this series, a brand new car to both Forza Horizon 5 and the game series as a whole.

This is backed up by 160 points for the Ferrari 599 GTO, which is not available through the Autoshow.

First up, as ever, is summer, the west season. An ‘Epic’ Ford Mustang ’71 can you yours for just 40 points, but the real star is the ‘Legendary’ Ferrari 250 GT for 20 points, which is our second new Ferrari addition to Forza Horizon 5. This was in Forza Horizon 4 but now makes its first appearance here.

Not to be confused with the 250 GTO, which is a Barn Find.

The MK1 Volkswagen Golf GTI will be used in the chapter-focussed #FORZATHON Weekly Challenge for 80 FORZATHON points. If you have some of those saved up, the Subaru Impreza 22B will be in the FORZATHON shop for 800 FP.

Elsewhere, a Puebla-themed driving suit will be yours by completing the Aid Of The Party challenge, an ‘Epic’ Lamborghini LM 002 for the Event Lab test and there will be both a photo challenge and a Treasure Hunt – we like those at Traxion.GG!

The season rewards for the second week of the Festival Playlist include the fierce ‘Epic’ Jaguar XKR-S ’15 for 40 points, but the main star is the Ferrari California T for 20 points. The Prancing Horse is yet another new Ferrari addition to Forza Horizon 5.

It has been in Forza Horizon 4, but this is the first time for this newer open-world racer.

The #FORZATHON Weekly Challenge features the 2017 Ford F-150 Raptor, completion of which nets 80 #FORZATHON Points, which can be used to pick up the Toyota Trueno for 700 FP.

Elsewhere the HOONIGAN RS200 Ford could be yours for completing the ‘Rallying Around Mexico’ challenge, the MINI X-RAID for playing the Event Lab task, and several themed items of clothing.

The Photo Challenge involves the use of a Renault 4 and the reward is a Cinco de Mayo appropriate dress.

Another week, another new Ferrari. It’s like we’re at Maranello, only not.

The 512TR is a derivation from the Testarossa, refined for the 90s but still keeping its esoteric flat-12 engine. It can be yours for 20 points and is once more a new car Forza Horizon 5.

Sitting alongside it is the incongruous MG3, returning after its debut in Series 4 for 40 points.

The #FORZATHON Weekly Challenge makes use of the Mexican-built BUHL 05RR sportscar.

The #FORZATHON shop will contain the Lamborghini Aventador spin-off Veneno for 700 FP and there are two Event Lab challenges this time around.

Alongside the Super Wheelspins, the ‘Legendary’ Hennessey VelociRaptor, ‘Epic’ Alumi Craft C.10 could be yours for completing challenges.

The second Treasure Hunt appears this time, alongside a fresh Photo Challenge. 100FP and a ‘To The Moon’ Forza Link Reward could you yours for completing these.

The final Series 7 week – spring, hot season – sees our fifth Ferrari on the roster for this month. Last but not least is the turbocharged, V8, F8 Tributo ’20. The last non-hybridised mid-engine Ferrari? Time will tell…

Savour it, for just 20 points. It sits alongside the ‘legendary’ Mercedes-Benz 300SL for 40 points.

The #FORZATHON Weekly Challenge is beach buggy themed for 80 FP.

To tie in, the Meyes Manx buggy will be 700 FP in the #FORZATHON shop this week too.

Elsewhere, there are the usual Super Wheelspins and a special Series 7-themed sombrero up for grabs.

The ‘Epic’ Toyota 2000GT will be yours if you finish the Seasonal Championship, and there’s a new Photo Challenge for a ‘Sleepy’ emote reward.

Sure, there’s usually a teaser for upcoming Festival Playlists, in this instance Series 8, but perhaps getting ahead of some leaks, three of the cars were revealed for a month’s time.

The Porsche 911 GT3 ’21 is a brand new addition to Forza Horizon 5, alongside the equally fresh Audi RS 4 Avant ’18 and a Mercedes-Benz AMG GT to complete a German theme.

Four new cars were also revealed for the paid DLC Car Pass. Each is available as a separate purchase or as part of the Car Pass. We have a detailed run-down in a separate article, but they will be the Dodge Magnum SRT8, Toyota Tacoma TRD Pro, Forsberg Racing Nissan 370Z rally car and Ford F-150 SVT Lightning.