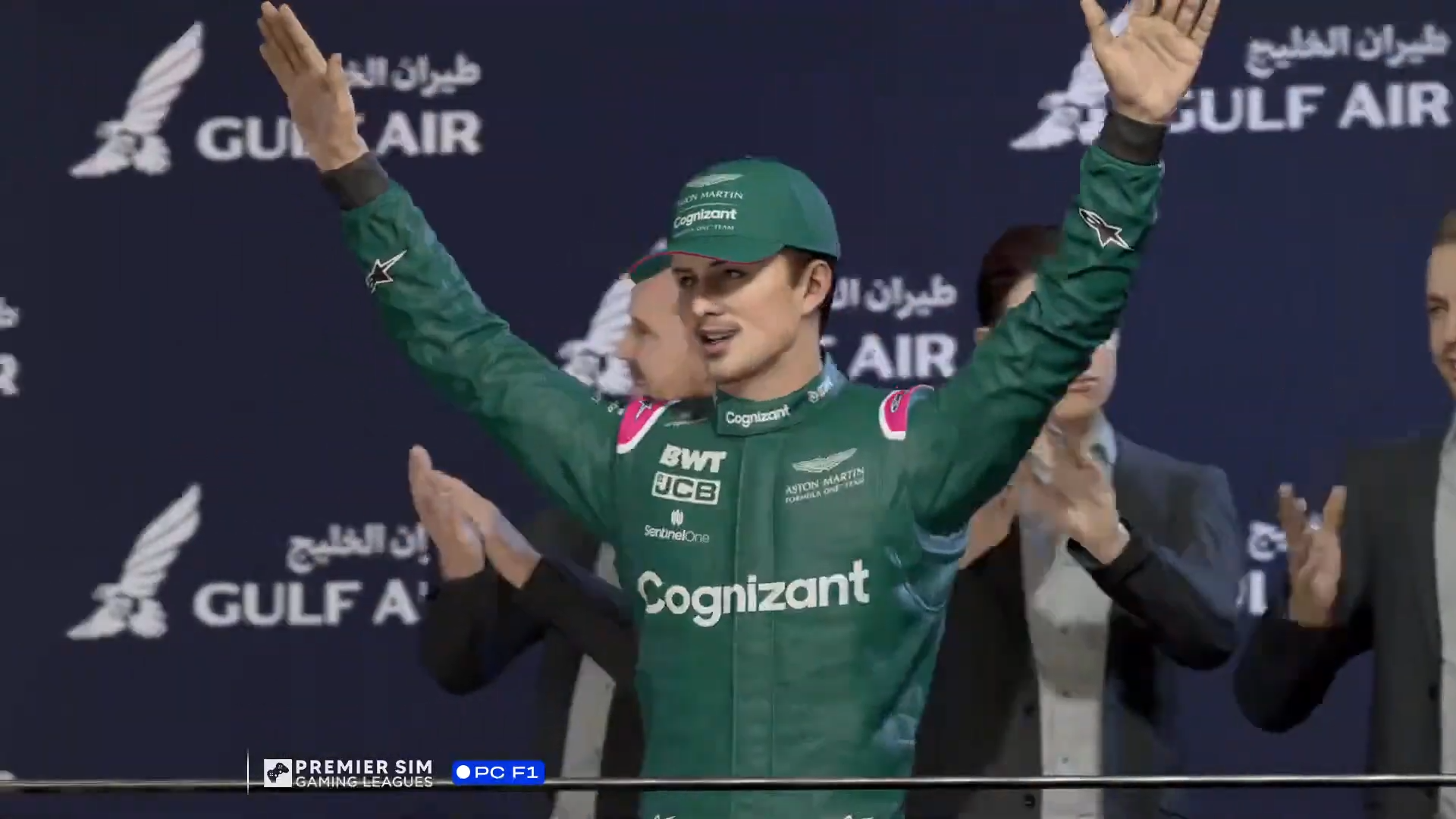 The 14th and final race of Season 30 for the Premier Sim Gaming Leagues (PSGL) took the field of drivers to Bahrain where Lucas Blakeley was victorious.

The former Aston Martin driver took full advantage of the soft tyres in the late stages of the race to take home a first PSGL victory ahead of Dani Bereznay and Thomas Ronhaar.

Blakeley opted to start from the back after the Scotsman received his rig earlier in the week. The two big casualties who joined him on the sidelines in Q1 were Haas’ Matthijs van Erven and Alife Butcher, who impressed on his PC debut last week at Imola.

The fight in Q2 was intriguing to see who could squeeze into the final part of qualifying on the medium tyres. Nine drivers went for track position and eased into Q3 on the red-walled soft tyres.

Luke Smith, who won the F2 title the day after this race, set the benchmark, but his former F2 championship rival Thomas Ronhaar beat him by 0.005 seconds. Last week’s winner Brendon Leigh was a tenth off in 13th but was in a good position for the race.

Into Q3, Ronhaar set an impressive benchmark to put him in provisional pole position, ahead of the ‘padman’ Louis Welch and the McLaren Shadow pairing of Wilson Hughes and Bereznay.

In fact, it was a seriously impressive banker from the Dutchman as his first lap was good enough for pole, but he cemented his dominance improved by nearly a tenth of a second.

Two-time PSGL PlayStation champion Hughes produced his joint-best qualifying this season to line up on the front row with Bereznay in third. Kristof Szelle and Carter Lundy completed the top five to set up a brilliant grid for the finale of PSGL Season 30.

Ronhaar struggled off the start, and the Dutchman was down to seventh on the opening lap. Hughes led into Turn 1, but further back, Blakeley cut through the field opening lap, making five overtakes and into 15th place.

Hughes and Bereznay exchanged places in the lead until the pitstop phase with only two overtakes behind. Szelle dropped out of DRS range from the front three, and he was swamped by Lundy and F2’s runner-up Simon Perigny.

Lundy pulled the pin at the end of Lap 8 as he tried to get into the fight for the lead. Most were reluctant to follow the Canadian in as they wanted fresh tyres to fight with at the end of the race.

Welch was the only soft runner to pit on Lap 9, with the majority opting to pit on Lap 10. Hughes, Perigny and Szelle jumped into the pits but had filtered out behind Welch and Lundy.

The final three soft runners of Bereznay, Bence Szabo-Konyi, and Alessio Di Capua changed tyres on Lap 11, leaving the top five as Ronhaar, Leigh, Thijmen Schutte, Duncan Hofland, and Blakeley. The drama was not over on Lap 11 as Hughes’ wheel disconnected and put him into the barrier at the penultimate corner, and he retired in the pits.

After being stuck behind Hofland since the first lap, Blakeley made a brilliant dive into Turn 1, and the Scotsman could set his sights on Schutte.

It was not just Schutte in his sights for Blakeley. Leigh made a simple pass on Ronhaar into Turn 1, but the Dutchman was out of position for Turn 2. Schutte got the run on his fellow countryman and tried to dive it down the inside of Turn 4.

Blakely positioned his car beautifully, and it was momentarily three-wide down into Turn 5 before Schutte backed off. The two-time F1 Esports race winner from 2021 sent it up the inside of Turn 8 on the Veloce Academy driver, and the two battled wheel-to-wheel into Turn 9 and 10, with the Scotsman coming out of the corner ahead and into second place.

Leigh pit immediately on Lap 16 but unfortunately sped, and a 5-second penalty. Blakeley, Ronhaar and Butcher responded a couple of laps later and began their march to the front of the field.

Leigh made three overtakes within a lap and was already within the lead DRS train on Lap 20, with Blakeley around four seconds behind.

The two-time F1 Esports World Champion made light work of Perigny, Bereznay, and Lundy but picked up slight wing damage forcing him back down the field.

Ronhaar and Hofland followed Blakeley through the traffic, and the trio were into the top eight at the end of Lap 23.

Blakeley’s tyre advantage proved crucial as he swept past Bereznay, Lundy, and Welch to take the lead with four laps remaining. Polesitter Ronhaar could not make the same progress as the Scotsman, but he eventually passed Lundy and Welch.

But no-one could stop Blakeley as he controlled the race as soon as he hit the front. The Scotsman won his first-ever PSGL race from Bereznay and Ronhaar. Bereznay’s second place was enough to move ahead of Bari Boroumand into second place in the championship standings.

It was an epic conclusion to a brilliantly entertaining PSGL season that had eight different winners. Despite all the drama and the winners, Jarno Opmeer came out on top again after seven wins in eight races after heartbreak in France.

Congratulations to Opmeer on his fourth PSGL title and Jake Benham, who helped Mercedes secure the constructor’s title. See you on F1 22.