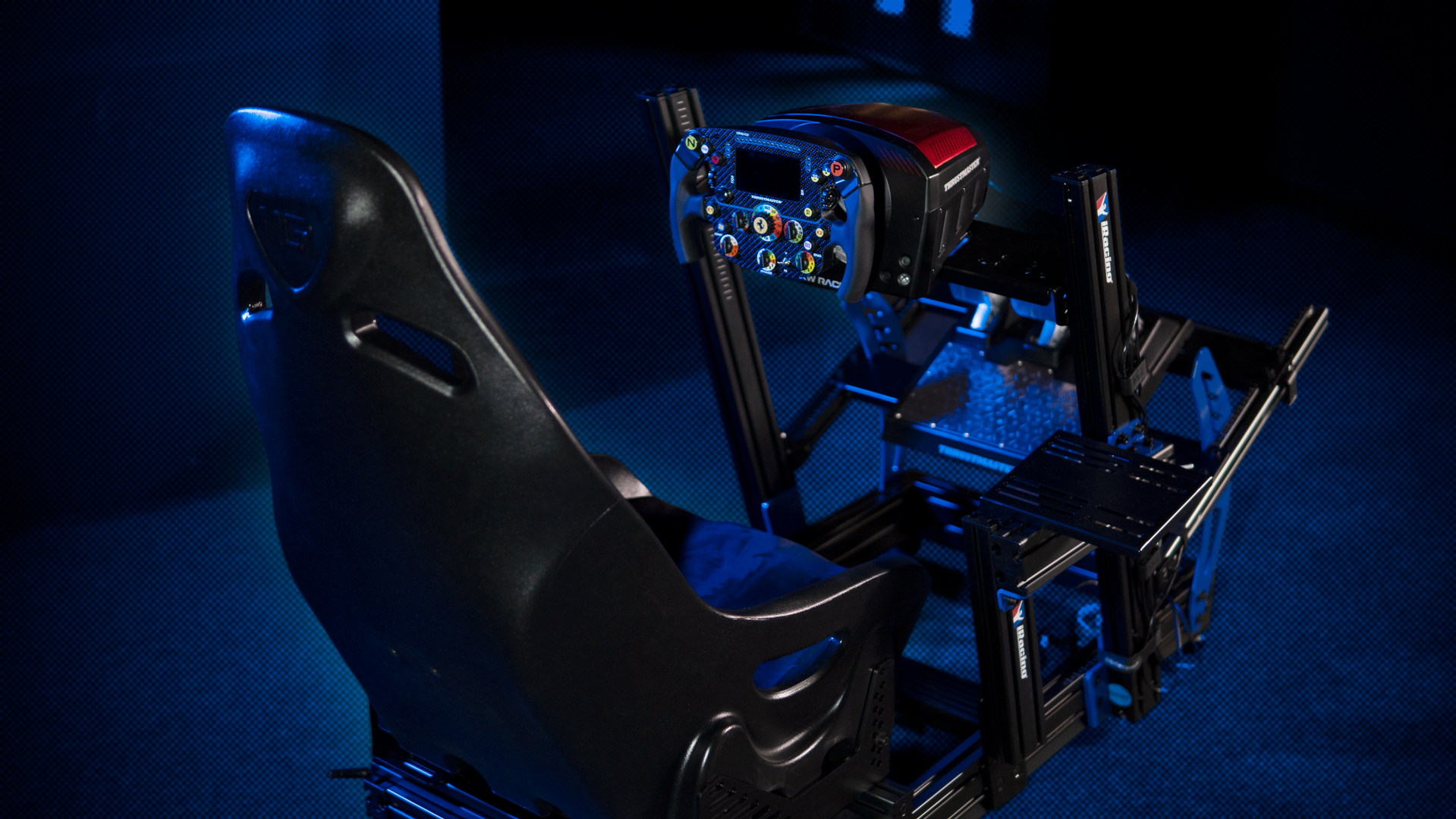 This aluminium profile sim racing cockpit is the best on the market. If you’re looking to step up your game, the Next Level Racing F-GT Elite iRacing Edition needs to be on your shopping list.

The DIY mentality is rife in sim racing, as you’ll see from the cacophony of custom-built cockpits across the internet. Aluminium extrusion is a sturdy favourite within the community, but going it alone is never as straightforward as picking up a ‘pre-built’ rig. So, a few sim racing hardware manufacturers have decided to bridge that gap.

If you’re wanting the most robust, customisable, and versatile cockpit in the Next Level Racing line, look no further than this.

There are many aluminium profile cockpits on the market, but none of them looks as good as the F-GT Elite. Extrusion rigs aren’t really supposed to look good. They exist as means to an end, function over form.

Though it’s clear Next Level Racing decided to not take that approach and created something that really stands out instead.

The use of extrusion cut and mounted at an angle (thanks to bespoke mounting hardware) gives the cockpit a truly unique profile, making it feel more like an entirely original design over using a tried-and-tested format, though with the added benefit of being compatible with basically anything you can attach to standard extrusion.

Pun very much intended here, but the packaging of this cockpit truly was ‘next level’. Every piece was comfortably snuggled in its own cut-out within a sea of polystyrene, ensuring nothing was damaged in transit. If you drop a piece of extrusion and dent its channels, it’s as good as useless.

Unlike the last aluminium extrusion rig I built and reviewed, I was also able to build the F-GT Elite almost entirely by myself.

Pre-drilled holes in the base of the cockpit made it incredibly easy to get things started, and since the aluminium features branding across most of the pieces, it was perfect to discern which piece was what.

If not, a few parts came with ‘Left’ and ‘Right’ stickers in case you got really stuck. The aforementioned bespoke mounting pieces made putting the vertical extrusion in place a breeze and didn’t require any awkward balancing in place to start getting screws to thread.

To make things even more effortless, the F-GT Elite supplies you with all the tools you need to build it, including two sizes of Allen key, and the same two diameter bits for a not-often included ratchet tool. You also receive a mildly magnetic spirit level for use when putting the wheel mounting plate on, which is honestly a godsend. Hats off to you, Next Level Racing, for making this process so straightforward and accessible!

The only moments of grief came when affixing said wheel mounting plate, as it’s rather heavy and tough to hold in place and screw in simultaneously. Sitting awkwardly beneath it and using my shoulder to get things threaded just about worked – though having someone else to hand would have completely avoided me looking an idiot.

Finally, while the adjustability cut-outs on the blue pedal support pieces are rather ingenious, the M8 washers used throughout the rig are simply too small to be used here, as they fall through the cut-outs at certain points. I’d recommend switching these out for larger washers, provided you’ve got some compatible ones lying around.

Once you’ve assembled the cockpit, it’s not time to go racing just yet, as you’ve got to get everything adjusted to suit your (or John’s) needs.

In the places you’d be loosening bolts and moving things around for the wheel and/or pedals, those pieces of aluminium profile have been laser engraved with markings to keep everything aligned without any guesswork. Plus, you’ve still got that magnetic spirit level from earlier.

Aluminium profile rigs aren’t as easily or speedily adjustable as some more bespoke offerings on the market, but that’s really by design. These cockpits have far more adjustability options compared to products with a select few positions to place things, so while it is a little more of a chore to get things right, at least it’s going to be exactly as you want it.

Moving the wheel plate into the right place was definitely better with two people, and tweaking the pedal height and adjustment was straightforward, albeit with that washer issue I mentioned earlier.

Overall though, the F-GT Elite’s initial build and adjustments were wonderfully painless. The instruction booklet was far more detailed compared to some other Next Level Racing products and compared to other extrusion rigs I have built, it was nowhere near as awkward or tiring.

By default, the F-GT Elite cockpit does not come with a seat, but the mounting hardware is universal, meaning you can throw almost whatever you want on there. We opted to stay on-brand and picked up an Elite ES1, the seat recommended for this particular rig. After getting everything ready to race, how does it fare?

It might sound odd, but you almost don’t know the F-GT Elite is even there while you’re using it. Getting in and out of the cockpit is incredibly easy – who’d have thought adding a simple foot brace in the middle of the floor would make such a difference? – and saying it’s a robust build is an understatement.

Grip the wheel tight and slam your foot down under braking, throw your arms around wildly as you attempt to correct a spin, raise the roof with your loud, gesticulating celebrations as you take pole – the F-GT Elite doesn’t move a muscle.

Not a creak, not a whisper.

Priced at £999/$1,009 (excluding the seat), it’s not a budget affair in the slightest, nor would it be a rig for first-time sim racers, unless you have money to burn.

But is it worth it? From the quality of the components to the degree of care taken in packaging and shipping, to how simple it was to construct, adjust, and use, absolutely it is worth the price. The fact you get a caddy to bolt to the side of the cockpit to keep your provided tools accessible and tidy is worth a grand in itself. That and the little spirit level.

Finally, something I did allude to earlier, the fact this is still aluminium extrusion with non-proprietary channels means this rig is compatible with a wide range of seats and accessories, irrelevant of the manufacturer. We’ve still got a cup holder from a previous aluminium rig that needs to go somewhere, perhaps it’s now found a home.

Keep an eye out on the Traxion YouTube Channel, as the F-GT Elite has taken on the mantle of John’s studio rig. If he’s ever on track, he’ll be driving in Next Level Racing’s greatest…

Reviewed with the Thrustmaster TS-XW base, Ferrari SF1000 rim and T-LCM pedals.

Full disclosure: The F-GT Elite iRacing Edition was provided by the manufacturer for review purposes. The ELITE ES1 was purchased for review. Here is our review policy.