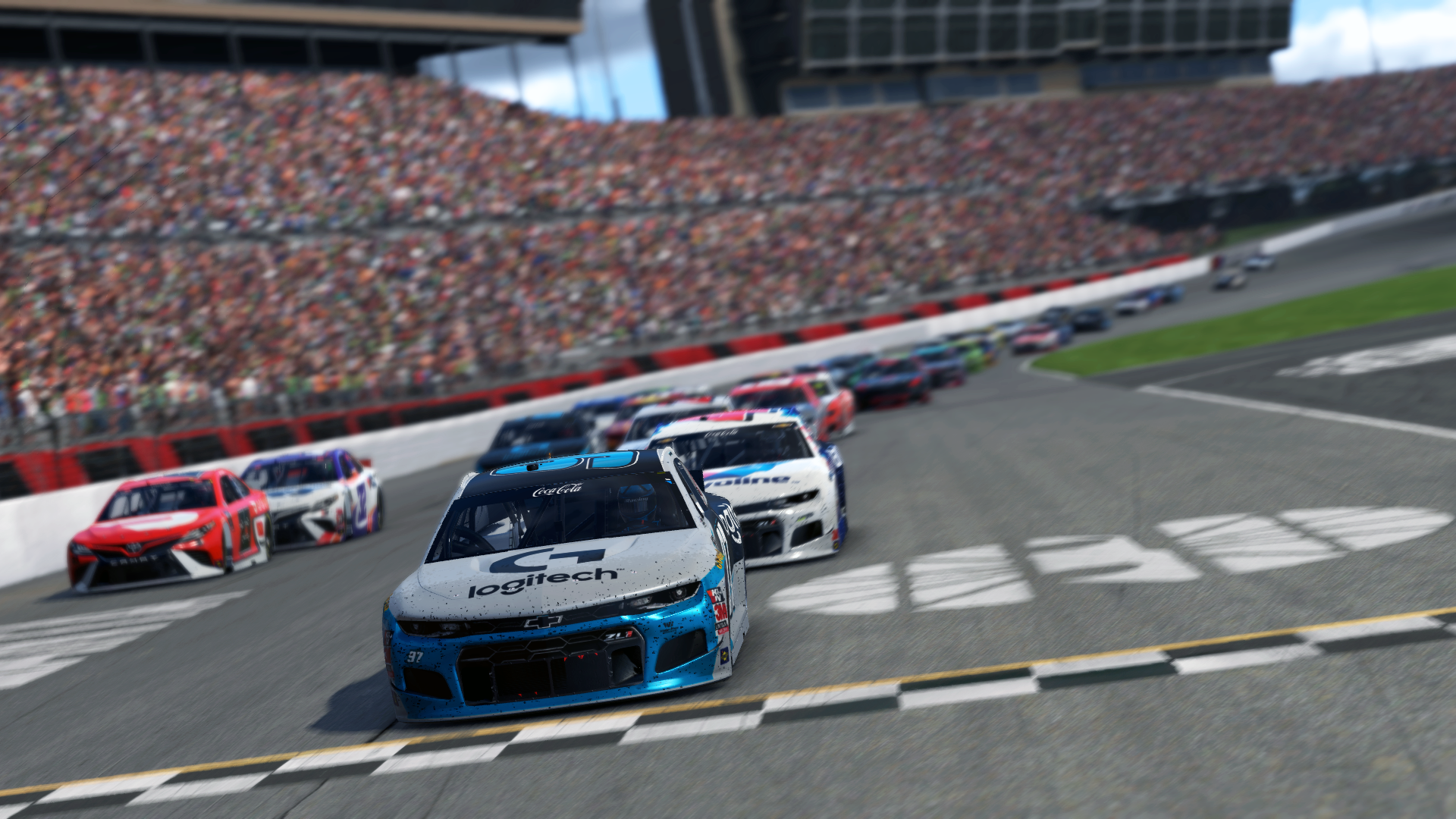 It’s been two years, six months, and five days since Logan Clampitt last visited eNASCAR Coca-Cola iRacing Series victory lane. That streak ended on Tuesday night at the virtual Atlanta Motor Speedway, as Clampitt was able to claim victory for the first time in 2021, and for the third time in his eNASCAR career.

With 43 laps to go, Clampitt made the final lead change of the evening, passing his own William Byron eSports teammate Nick Ottinger for the coveted position. Ottinger hung on and kept Clampitt honest, but two lap fresher tires seemed to be the difference at the end as Clampitt wound up winning by over two seconds.

As Clampitt crossed the line and drove into the virtual victory lane, he was overcome with emotion.

“Oh my gosh, man, I am so, so emotional,” Clampitt said post-race on the iRacing eSports Network. “I moved out here with Michael (Conti) to change my life, and this game has just changed my life so much. It’s my first win away being away from my parents, and I’m glad I have my friends to celebrate with. They’re like family.”

Clampitt returned to eNASCAR victory lane for the first time since Indianapolis in 2018. The defending champion Ottinger was beyond ecstatic for his new William Byron eSports teammate in the post-race breakdown.

“What a win for Logan and this William Byron eSports team,” Ottinger said. “We had a 1-2 finish, and I’m so proud of Logan. He’s been wanting one for a couple of years, and he’s plenty fast enough, and he proved it tonight.”

With four winners in as many races, and with eight races still until the playoffs, tickets are running out fast in the 10-man tournament. Clampitt joins Michael Conti (JR Motorsports), Keegan Leahy (23XI Racing), and Ryan Luza (XSET Gaming) as the four winners on the 2021 season.

If more than 10 drivers find virtual victory lane during the 12-race regular season, it will have to go to the points standings. Despite having four different winners, Casey Kirwan (XSET Gaming) currently leads the drivers standings by six points over Leahy leaving Atlanta.

The 163-lap event was fairly eventful for only having a single caution period at lap 49.

Mitchell deJong (23XI Racing) claimed his second pole position of the season and led the first 52 laps to start off the race. On the ensuing restart following an incident involving Zack Novak (Richmond Raceway eSports) and Bob Bryant (Kligerman Sport), deJong was unable to hold on to the top spot, giving way to Clampitt at lap 53.

As the race progressed, Derek Justis (JTG Daugherty Racing) found trouble racing inside the Top 10 with last week’s winner, Luza. Justis wound up with another tough finish in 35th.

John Gorlinsky (Wood Brothers Gaming) is the only multiple time winner at Atlanta, and ran a good chunk of the race inside the Top 10. However, on lap 90, things went south as he slammed the wall after a nudge from the bumper of Stewart-Haas eSports’ Graham Bowlin. Much later in the event, Gorlinsky got some revenge on Bowlin, hooking him into the wall with under 10 laps to go. Bowlin wound up dropping from sixth to 12th, while Gorlinsky limped back home to 38th place.

The other JTG Daugherty Racing driver, Brian Schoenburg, got into it with Femi Olat (Gibbs Gaming) on a few occasions in the first half of the race. It all came to a head on lap 95 as the duo raced in a three-wide situation. After big contact, Olat kept going straight, but with significant damage. Schoenburg and Ashton Crowder (Elliott Sadler eSports) weren’t as lucky, and spun into the inside wall. No caution was thrown, and the result was a last place finish for Crowder.

As calamity struck for some, the long game worked wonders for others. Steven Wilson (Roush Fenway Gaming) backed up his runner-up effort two weeks ago at Homestead-Miami with another Top 5 finish this week at Atlanta after starting 28th. Matt Bussa (Mode Motorsports) was the hard charger of the race, climbing 24 spots from 39th to finish in 15th.

It was the first 1-2 finish for William Byron eSports on Tuesday. The maximum points boosted the club from sixth to second overall, only 19 points behind last week’s big winner, XSET Gaming.

XSET followed up their winning week with an eighth place finish for Luza and a ninth place effort for Kirwan. JR Motorsports had their best collective week, collecting a pair of Top 6 finishes from Conti in fourth and Brad Davies in sixth.

On the flip side, some teams continue to fall behind after four races.

Kligerman Sport started off the season as a team to watch for the title, but they’ve slipped outside of the top half, now 11th, after a tough break for both Bryant who was involved in the only caution, as well as Pro Series Champion Isaac Gann, who had internet issues while running in third most of the night.

Clint Bowyer Racing, McLaren Shadow, and JTG Daugherty Racing collectively have less points than either of the top two teams in the standings. Their drivers will need to start turning their luck around sooner than later if they want to avoid relegation to the Road-to-Pro Challenger Series at the end of the year.

AUTO CLUB SPEEDWAY UP NEXT

There won’t be a real race at the two-mile speedway in Southern California this year, but the virtual race could be one of the best of the season in two weeks when the eNASCAR Coca-Cola iRacing Series heads there. New updates to the iRacing build bring multi-grooved racing back into the fold, which could be key at a track as wide as Auto Club Speedway.

Ashton Crowder took the victory for what was Burton Kligerman eSports last season. Ryan Luza has two wins at the speedway, while Nick Ottinger and Ray Alfalla both have a win apiece.