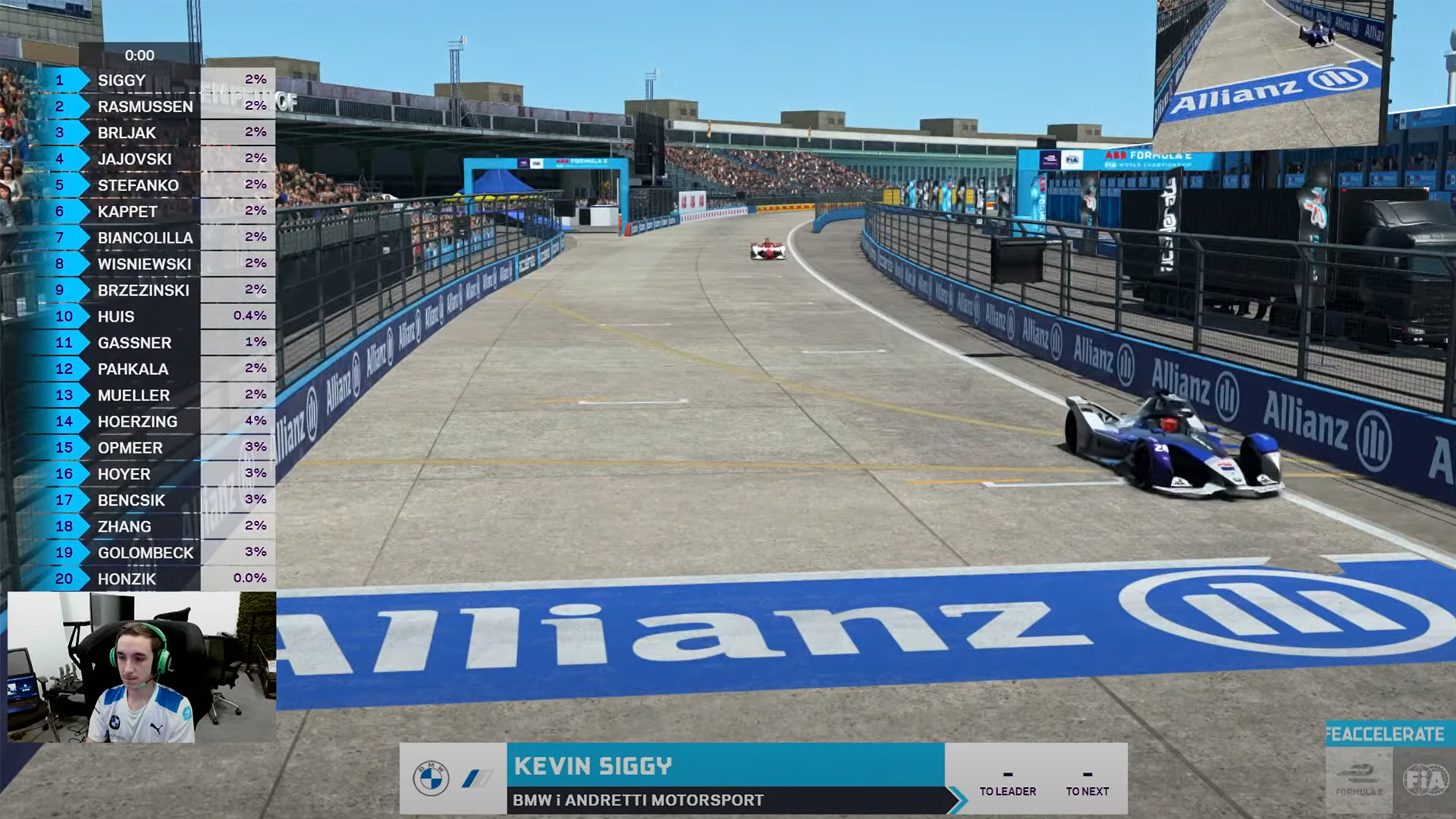 Berlin played host to Round 3 of the Formula E: Accelerate 2021 season in a year which, up until this event, had been dominated by one man. Having taken both pole positions and wins on offer, Erhan Jajovski found himself in fine form to tackle the last race before a mid-season break, during which the real-life Formula E championship will get underway.

Considering how short this season is, every point matters in the battle for a share of the (minimum) €100,000 prize pool and the chance to drive the real deal Gen2 Formula E machine. With Germany looming, Jajovski led by a full race win’s worth of points over Kevin Siggy, who had struck the podium twice. After his first podium of the season, combined with a fastest lap, Frederik Rasmussen was a further 10 points behind.

Once again, the qualifying groups were determined by championship order, with the likes of Jajovski placed in Group 1. Though the greener track didn’t necessarily have the balancing effect hoped for in Hong Kong, it did catch the Macedonian out this time with a lap that only ended up being good enough for P5 in his group!

With a guaranteed new pole sitter to look forward to, it was now a question of who that driver would be and Kevin Siggy brought his A-Game to lay down a 1:07.167 benchmark. Rasmussen and Huis both got within six-hundredths of the Slovenian, but it was clear that this was a scorching time from the man who set the fastest lap during round one.

Siggy’s teammate at BMW, Petar Brljak, also had a very strong session in Group 2. The Croatian found himself in fourth and the prime position to act as a rear gunner come the ePrix. He’d also be the last person to get within a tenth of the pole time, with the final two groups delivering somewhat expected results.

This was all music to the ears of Jajovski who would end Qualifying in P10; hardly a disaster given his strong start to 2021. Ahead of him would start the likes of podium-sitter Manuel Biancolilla, front runner Graham Carroll and Czechia’s Martin Stefanko – who put in another excellent time to grace the top five.

Finn Olli Pahkala put in his worst effort of the season to be down in P17, though he had points scoring company in Marius Golombeck who had qualified well yet ultimately disappointed in the Hong Kong ePrix. German Michi Hoyer made his debut for Audi qualifying P21; the experienced racer subbing in for Kelvin van der Linde who was competing in a real-life category this week.

A concertina effect into the first corner was expected to develop some issues, but thankfully for those seeking high-scoring positions, the only incident of note occurred at the back, with a spinning Lehouck causing confusion. There were lightning starts from both Risto Kappet and Erhan Jajovski which saw the two up into 5th and 7th respectively whilst Stefanko’s high ground was immediately swallowed up, the Czech falling to 8th. Graham Carroll was quick to respond to Kappet’s statement, the Brit back up into 5th before the end of the lap.

Unlike Jajovski’s dominant drives from the front, Siggy’s opening five minutes leading an ePrix featured a much more tense back and forth between himself and Rasmussen. The Dane briefly headed the field towards the five-minute mark but only thanks to Siggy picking up Attack Mode for the first time. By Turn 2 of the following lap, he was behind once again.

Speaking of the Macedonian, his rise up the order was steady and methodical. By half-distance, he had traversed his way past the fast-launching Kappet and was giving Carroll plenty of food for thought. A spark of luck came the Brits way as Brljak, taking Attack Mode, relinquished the position and was not able to grasp it again thanks to some stout defending.

For Carroll and Huis further up the road, however, the race would soon take a horrible twist. It transpired that their energy management strategy at this point in the race was far too aggressive and fears mounted with ten minutes left that they might not make the finish. This would mark the first instance of not just one, but two drivers failing to reach the chequered flag due to running out of energy. As if to make matters worse, the two went all too eagerly into combat at the first opportunity.

And so it came to pass! The worst-case scenario materialised for the pair as Siggy crossed the line to start a final lap with just five seconds left on the timer. With just 2-3% life left in their batteries, there was no hope of holding onto points. From 3rd and 4th for Carroll and Huis respectively, they ended up 20th and 16th. Brljak was the biggest beneficiary picking up his first podium of the season.

BMW i Andretti in their home event, therefore, had struck not just bronze but gold as well with Siggy fending off Rasmussen for his first victory of the campaign. The Dane, though frustrated to be the bridesmaid again, will take solace in outsourcing Jajovski who himself will be thanking the racing gods for gaining two free positions on the final lap.

The swing was significant enough to give Siggy some real hope moving into the second part of the season, with the gap to Jajovski slashed to just 9 points and the gap to those behind extended to, at least, 20 points dependent on the driver. That said, it should not be ignored that Rasmussen also closed on the championship leader this round and is starting to show some ruthless consistency.

Venturi’s lack of a second driver scoring points finally came to haunt them with Brljak’s first podium of the season helping to propel BMW i Andretti into the lead of the Teams’ standings by 12 points.

It was originally thought that this would be the first round with no Fastest Lap points awarded as Olli Pahkala finished in 11th. However, a post-race penalty for Marc Gassner promoted the Finn up into 10th and thus took home not just 1 point but 2 – a marvellous comeback considering his challenging evening.

We now wait a month for Round 4 as Formula E’s 2021 season gets underway in Diriyah, Saudi Arabia. As it so happens, we’ll be heading to the virtual equivalent of this track when Accelerate returns on March 11th.