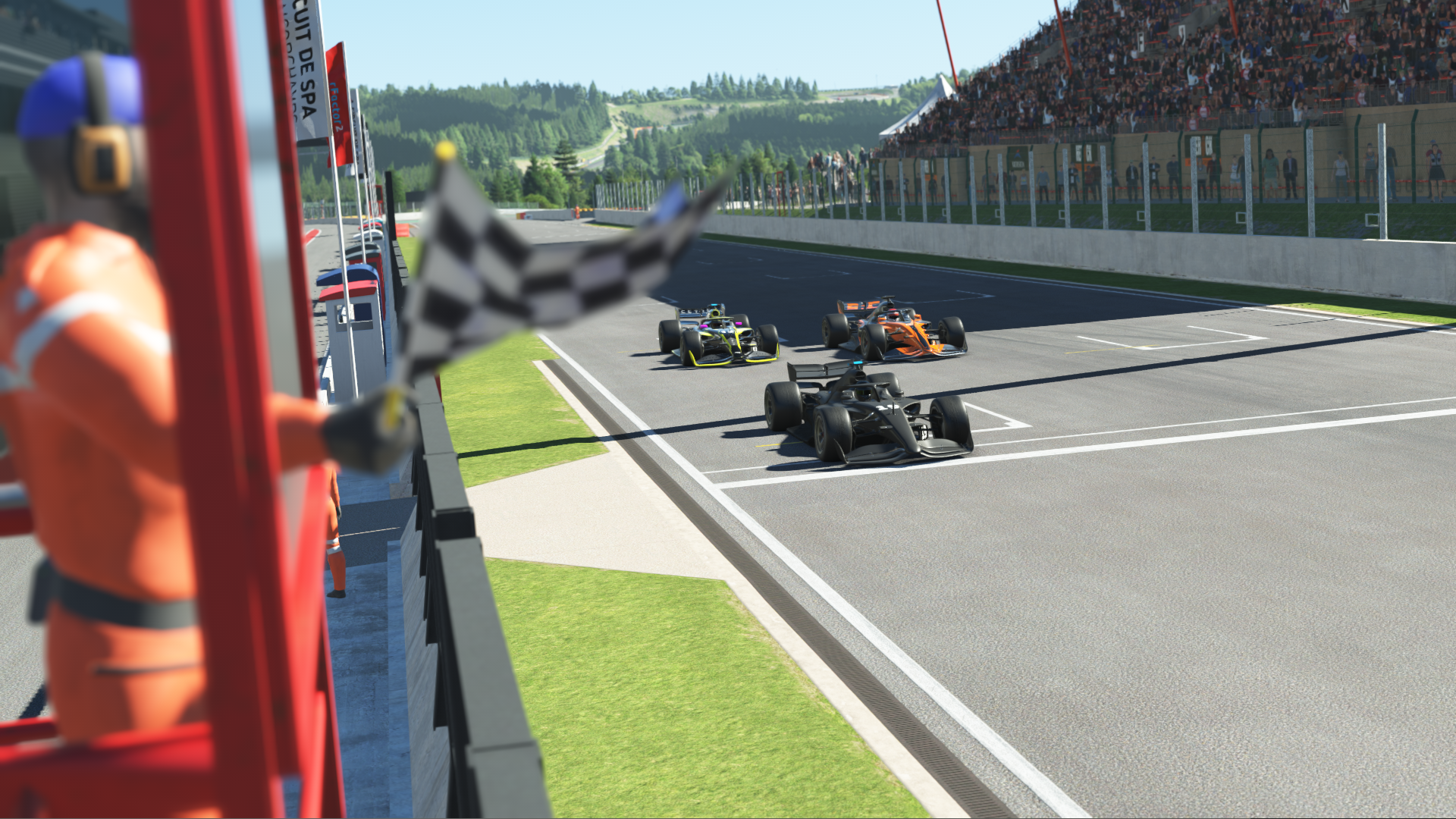 The opening race of the 2022 Formula Challenge Series was declared an exhibition race after complications with the entry list.

By James Kirk and Thomas Harrison-Lord

The single-seater V10-powered racing esports series, Formula Challenge Series, encountered some testing circumstances for its first race of 2022 and was called an exhibition event.

Unfortunately, during the first race of the season at Spa-Francorchamps, drivers from more than just the top split were included in the roster. That meant the event became a non-points-scoring exhibition – with a lively finish.

Alexandre Peroche would become the first pole sitter for this season ahead of Jean Alesi Esports Academy’s Mattia Crupi. The independent driver sitting pretty in first position around the formation lap would also be followed by SimRacing Club’s Sander Kallas and Cetrez Nitor Velox’s Rory MacDuff.

Whether through their own means or otherwise, both Perouche and Crupi didn’t make the grid leaving Kallas to start the race as the spearpoint. MacDuff was the big loser into La Source taking avoiding action thanks to Eros Masciulli and his own teammate, Christian Michel.

Behind them, at the end of the first lap, the first instances of push-to-pass were initiated; Jelle Binsbergen ultimately gained a place in a less than clinical fashion through the Chicane.

Masciulli wasn’t content with just second place and lining up a great run on Kallas down the Kemmel Straight offered him an ideal overtaking opportunity without the boost of push-to-pass.

The mechanism was seeing plenty of usages further down the top 10 with fifth to ninth hotly contested. MacDuff was able to find success using it, finally repassing Michel with 38 minutes remaining.

Michel was the first to visit pitlane, triggering several visits by fellow competitors. Masciulli led half the field into a pitstop the following lap, leaving the likes of Kallas aiming for a no-stop or overcut strategy. The undercut certainly appeared powerful as MacDuff found out, seeing his teammate cruise by with seconds in hand.

Kallas finally made his stop with the lion’s share of sixteen minutes left to run. Masciulli, sensationally, was then disqualified from the session leaving Kallas miles ahead of MacDuff (ahead of his teammate once more) and within sight of Turkka Hakkinen who was yet to stop.

The Estonian hunted down the Finn and began his direct assault in earnest with six minutes left. The move seemed inevitable and yet, against all the odds, Hakkinen managed to defend Kallas successfully time and time again. It wouldn’t be until the final lap before Kallas found a way through but the elbows were out perhaps a little too aggressively.

Even before race control could take a look, extraordinary scenes unfolded. Thanks to the intensity of the fight, MacDuff was now not only targeting a second place but potentially even the win itself. All three drivers went side-by-side into the final corners but Kallas, seemingly running out of fuel, was the slowest out!

Against all the odds, Hakkinen would win the race on a no-stop strategy while MacDuff finished second. Kallas would salvage third on the road. It’s expected that this round will be re-run later in the year for championship points.