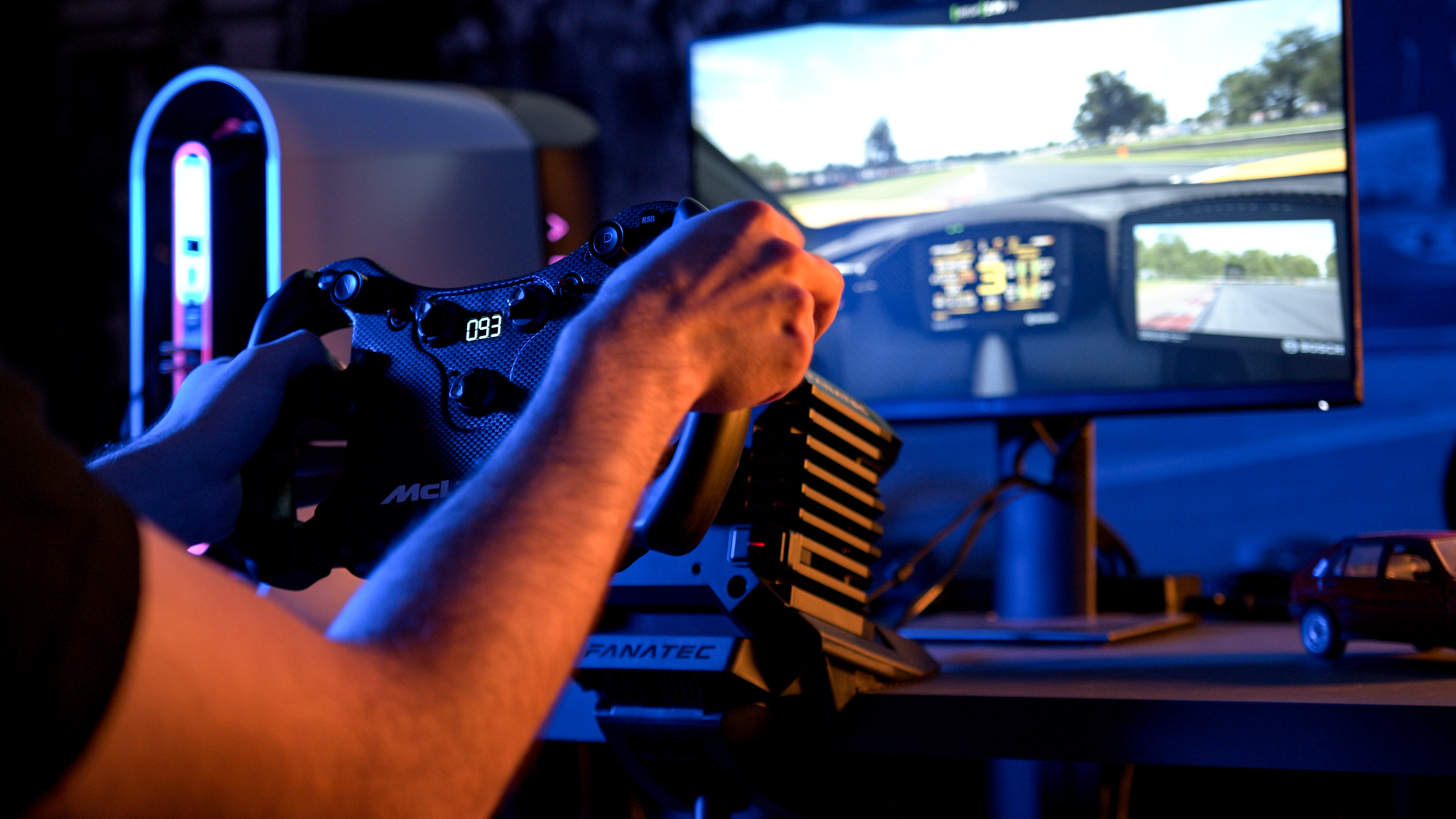 Fanatec set the sim racing world alight with its announcement of the CSL DD. Direct drive wheel bases are notoriously pricey, but many say it’s worth the outlay as the feedback you get from one is like nothing else. Fanatec already has a presence in the direct drive market with the Podium DD1 and DD2 wheelbase, but DD is a new ‘budget’ direct drive wheelbase.

‘Direct drive’ and ‘budget’ don’t historically go hand in hand, so how on earth does this thing even exist?

While I’d usually leave it until the end, let’s get the price of at least the CSL DD itself out the way. It’ll set you back €349.95, which is very close to the Logitech G923. Admittedly, the G923 is the base, wheel, and pedals all in one, whereas the CSL DD is literally just the base itself, but when you’re entering this kind of ecosystem, you’re not going to get the entire experience out of one box.

However, starting your direct drive journey at €349.95 versus €1,199.95 is much more reasonable. If you are coming in completely empty-handed, Fanatec also offers the CSL Pedals too. The only thing the German peripheral manufacturer is missing to have a full budget package is a CSL wheel rim, but pretty much any Fanatec rim and ClubSport Universal Hub will work on this quick-release mount.

In the box for the CSL DD you’ll find the unit itself, four mounting t-nuts, the power supply, and a USB C to USB A cable. You know it’s up to date tech when it’s USB C.

The first thing you’ll notice between the CSL DD and the DD1 is the physical size of the device. When I first opened the box, I reacted as if I’d just seen a newly-born kitten. It’s adorably small, and subsequently way lighter than its hefty sibling. The custom motor is housed within an aluminium surround, that not only acts as the majority of the outer shell but also as a heatsink, so there are no active cooling parts within meaning no fan noise. This thing is silent. The front and back panels are solid plastic, and the quick release shaft is also aluminium. Light, but without feeling cheap.

As for mounting, the DD1 has pre-set holes on the bottom and sides, whereas the CSL DD comes with the aforementioned t-nuts and channels on the sides and bottom of the unit so you can decide nice and neatly how you want to mount it. We stuck it on our SimPlexity V12 rig, and as I’d suspected in our review of the rig, it wasn’t a quick task. If you were wanting to use the same mounting screws to switch between a DD1 and the CSL DD, you’re not in luck, as the threads are narrower on the CSL DD’s t-nuts.

The power button is now located on the front of the unit, compared to the back on the DD1, which is easier to use. The LED indicator shows you what the wheel is currently programmed to work with. Red for PC, yellow for Xbox, and nothing for PlayStation since this thing isn’t PlayStation compatible, and apparently never will be – at least in this release.

However, the power button’s positioning does mean one of the four side channels for the t-nuts stops short. The three others can have the holes pushed all the way to the front. Unless I’m missing something, I’m not sure why that was overlooked. Why not add little blocks so they all line up nicely and not have to do it by eye? It’s not a huge pain, especially if you’re mounting it from the bottom, but still.

Next up, the CSL Pedals come by default as a duo. One gas pedal and one brake pedal. The set is metal in their construction, apart from the plastic pedals themselves, which still look pretty nice. Compared to their bigger brother, the CSL Elite pedals, I honestly prefer the look of the budget set. Plus, they’re €20 cheaper at €79.95 versus €99.95.

Putting the kit together was straightforward, you can position them how you like, and they’re comfortable to use. But there are a bunch of bits and pieces you can pick up as optional extras to enhance your experience. For example, you can purchase a clutch kit to have a trio of pedals and a ‘pedal tuning kit’.

This is where we feel we’ve come to our first pothole in the road. When I say ‘tuning kit’, what do you think you’d be able to do with it?

Add a load-cell to the brake pedal? Switch out the springs, tighten things up? Nope. You get some, admittedly gorgeous, double-shot brushed aluminium replacement pedals – but that’s it. So it’s less of a ‘tuning’ kit, and more of an ‘upgrade kit’, so it’s a little misleading. There will be an additional load cell adaptor kit at a later date, however.

Also, regarding both the base pedals, clutch and ‘tuning’ kit, they use Torx screws for assembly instead of Phillips heads, which means you need to use their annoying little Allen key thing rather than a screwdriver you already own. I’m not exactly inept at building stuff and using tools, but for some reason a Torx-ended Allen key thing made me feel like a three-year-old trying to put a square block in a round hole. At least put a straight Torx screwdriver in Fanatec, or better yet, bring your own, dear consumer.

Two more additional products you can pick up for this ecosystem are the CSL DD table clamp and the Boost Kit, which is physically a larger power supply that increases the peak torque of the CSL DD from 5Nm with the stock PSU up to 8Nm. We’re going to do a separate article and video comparing the too, so stay tuned.

Okay, I’ve rattled on long enough about this group of products. It’s time to switch it on – the real acid test.

With the CSL DD, you get all of the characteristics, fidelity and detail that you would expect from its bigger and more expensive siblings. You could even argue that the new motor makes it smoother than the previous Fanatec direct drive efforts. Clean is the word I would use, everything feels slick and instant, connecting you to the road as you drive along.

The biggest compromise you will find relative to a podium series base is, unsurprisingly, the lack of power. 5nm of torque is a small number compared to the 20Nm and 25Nm found in the DD1 and DD2 respectively, and although only a minority will regularly use more than half of the available torque in those efforts, it does feel like it could do with that extra little kick of power. With the boost kit and the extra 3Nm, the CSL DD gets terrifyingly close to the podium in terms of performance.

Despite the enhanced detail in the force feedback being present, it can be hard to sense it at the limits of adhesion when using the 5Nm setting. Kerbs don’t quite give you that kick through the steering wheel that you would get if more power was available, and during a big slide, there does come a phase where you are left slightly unsure of exactly what the car is doing underneath you.

As it snaps and you wildly spin off into the barrier, you are left wishing you had that little bit more weight mid-corner in order to prevent the incident. It’s a shame to have so much resolution present, but not always be able to utilise it. A bit like having a brand new 4K TV that’s the size of a PC monitor.

But here’s the thing. The CSL DD hasn’t been set up to directly compete with the existing direct drive market, it’s price point (depending on pedals and wheel rim) places it against mid-range gear and belt-driven wheels. When you consider this, you begin to realise just how clever Fanatec has been. The torque pretty much matches the best non direct drive options, and you don’t get any of the extra mechanical friction, damping or potential heat issues.

In terms of performance, the CSL DD is the perfect upgrade for anyone looking to step up from entry-level equipment. It provides you with a clarity and immediacy that blows its rivals out of the water, and the optional boost pack provides you with a clear upgrade path. The hype was real, this is a complete and utter game-changer.

Before I wrap things up, let’s take a quick look at the table clamp. Mounting a direct drive wheel base to a table isn’t something you’d usually do, as the amount of force these things output could topple your desk, or if you’re using a cheap one, not even support its weight. But since the CSL DD is much smaller and lighter, clamping it to a desk isn’t all that ridiculous.

The clamp is mostly of a solid plastic construction with bits of metal where it counts, and a lot of textured rubber feet to keep things sturdy. There’s no need to screw anything into anything – which did feel a little concerning at first, but it was mounted securely.

As for using it on a table, there is a bit of wobble depending on how your desk is built. If you’ve got something robust like an IKEA countertop or something with a ton of weight on top like multiple monitors and your PC tower, you’ll be fine. But, if say a Logitech G923 gives your desk a bit of wobble, then the DD will do that significantly more.

Usually a belt or gear driven wheel is absolutely fine for any desk, but seeing as the CSL DD packs more of a punch, you need to be aware of whether your setup can safely accommodate it. But if you’re rocking a solid enough foundation to happily use it with the desk clamp, it’s brilliant. Plus, the CSL pedals have a ton of grippy rubber on the underside to keep things from moving. That’s on a hard floor though, admittedly.

In conclusion, the CSL DD is a mind-blowing bit of kit. The barrier for entry into the direct drive space now a third of what it was before, and there’s literally nothing else like this at this price point on the market.

But, it’s not for everyone. That’s not necessarily a bad thing, however. If you’ve been using a belt or gear driven wheel and want to make the jump to something more serious, you don’t need to save literally thousands of pounds to get there. It’s still not cheap overall, of course. The base, pedals, and wheel rim at a minimum you’re looking at a good £700-odd, but that’s still less than just buying the DD1 base and nothing else.

Oh, and as we’ve said already, PlayStation owners will have to wait a little longer for a different variant, and those on Xbox can only use wheel rims from a specific compatibility list.

If you’ve already got a direct drive wheel base, the CSL DD isn’t for you. There’s nothing you’ll get out of this that you won’t already get. The CSL Pedals are solid and fantastic for their price point, though the ‘tuning’ kit doesn’t do much more apart from aesthetics. The table clamp works wonders if you don’t have a rig, too.

If you’re looking to take your sim racing experience to the next level, look no further than the CSL DD. The clarity you get at this price point almost feels criminal. I don’t know how they’ve done it, but hats off, Fanatec. These new products change everything. The competition has a lot of catching up to do.