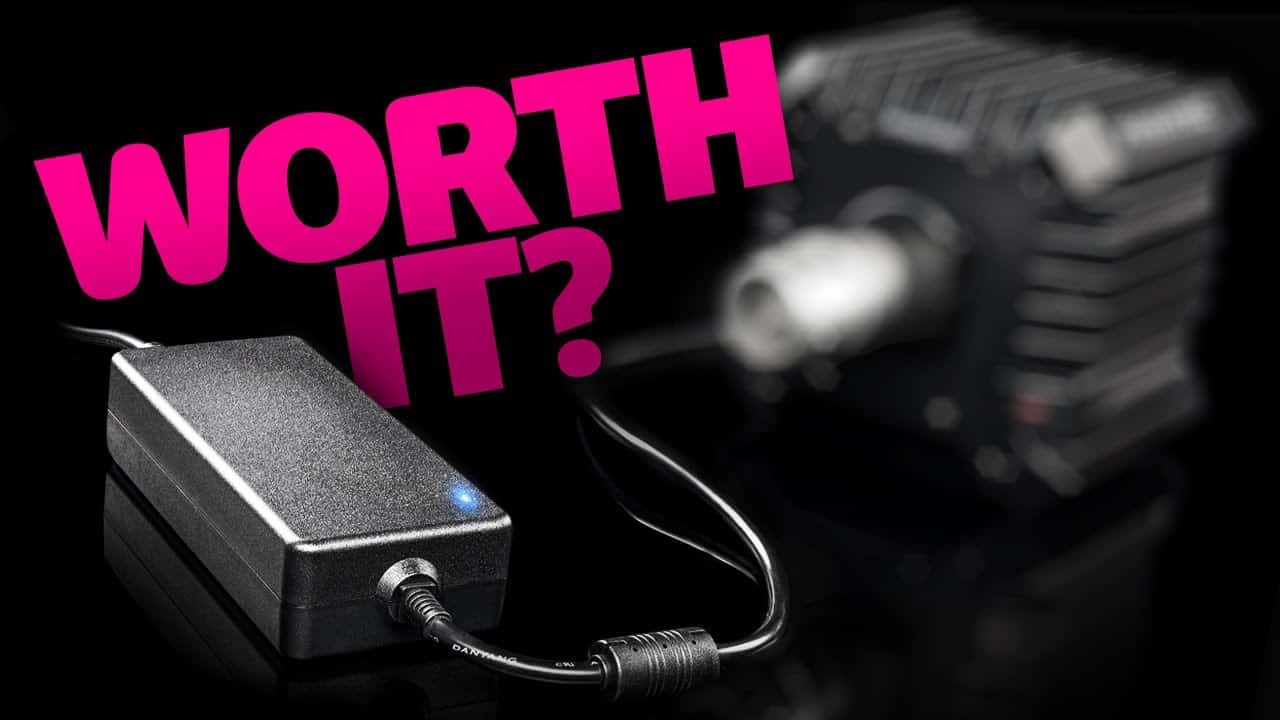 When we reviewed the Fanatec CSL DD – that PC and Xbox sim racing wheel base – recently, we were suitably impressed. We said that you don’t need the optional Fanatec Boost Kit 180, that ups the peak torque from 5Nm to 8Nm, for this new wheel-base to send its mid-range rivals packing. The question is, do you want it?

To really understand how the €149.95 Boost Kit 180 influences the experience, we first need to look at the regular power supply. The peak torque nitting 8Nm is a notable increase, but still sounds pretty low when you consider that the Fanatec Podium Wheel Base DD1 and DD2 produce up to 20Nm and 25Nm respectively. As you can imagine, those power supplies are gargantuan…

With the regular 5Nm power supply plugged into the CSL DD, you still have an incredible technical achievement in your hands. As we discussed in the full wheel base review, the smoothness, cleanliness and fidelity of this wheel base is second to none. You get all of the positive characteristics you would expect from direct drive when it comes to the resolution and detail, yet none of the negative characteristics you would expect from belt or gear driven alternatives such as heat buildup and mechanical damping.

If this was a game of wheel base top trumps, the only category you would need to worry about when going head to head with other similarly priced rivals would be the peak torque itself. For example, the CSL Elite Base that this has replaced could actually reach 6Nm of torque at peak output, one more newton-metre than the standard supply on the CSL DD. Many of the Thrustmaster bases also come in at a similar level of peak power.

When cornering normally, with the standard power supply, you can sometimes notice a lack of weight right at the limits of adhesion. In a high downforce car around a circuit with plenty of medium speed corners for example, as the wheel is put through its paces you will likely miss out on some of the more detailed force feedback signals that many sims are capable of providing.

So then, even though the detail is incredible during lower intensity situations, it can go missing just when you need it, usually on the limits of grip mid-corner. What this means is you don’t always know exactly what the car is doing underneath you.

All of this is why the Boost Kit 180 in theory, should be a tangible improvement to the experience. Its sole purpose is to increase the peak torque, and therefore give the base more power in order to exploit that detail already present. It changes the one area of the base that would actually benefit from a change, so the big question is, does the theory translate into reality?

In my first go at full power, instantly you could feel the weight in the middle of the wheel. Straight away, the kerbs had that clear and precise rumble effect. I could feel exactly what the car was doing. Every bump in the road was prevalent. It gives you so much straight away, but the real test would be when the grip starts to go away and the limits are pushed over the edge.

Sometimes in the centre of the corner, you’ll lose track of it when you’re right on the edge. With this boost kit, you don’t get any of that. You can actually tell when you push it too far and start sliding immediately, which could help in preempting it from fully happening. It takes the guessing out of those situations. It’s fun, and it makes the car come alive.

So yes, in general, it feels great and yes you really do notice that extra power, but how does it compare with the original power supply across a variety of different platforms? And will it make me any quicker? I decided to do a direct comparison across five different racing games to try and collect some meaningful data. Let’s take them one by one…

I started off with a sim that has recently updated its force feedback system, RaceRoom Racing Experience. This title caters for rookie racers whilst also accommodating experienced players and top-level esports events, a perfect middle ground test.

I used the Boost Kit 180 to compete in the recent ADAC GT Masters Esports Championship round, and with the original power supply, I really did notice a lack of feedback. You can feel the texture of the kerbs and the bumps, but despite its crisp nature, it was too light for my liking.

I then fired up the optional extra, and instantly, I felt more connected to the road. My potential lap times were actually the same with both setups, but the actual lap time I achieved was 2 tenths quicker with the Boost Kit 180, only a tenth away from my potential best time.

Next up, I tried something very different, DiRT Rally 2.0. I started with the maximum power available and it was actually too high. I found it tough to wrestle the car through the faster sections, and the immediacy of the feedback was actually resulting in a treacherous driving experience. On this occasion, It felt like my co-driver wasn’t the only passenger.

With the regular power supply, I felt more in control of the experience, with enough power to keep me on the straight and narrow, but not so much that I was being dragged along for the ride. I matched my times during every sector of the stage to the nearest half-second, except for the high-speed section, where I actually gained a whopping three seconds.

Turning down the power of the Boost Kit 180 is of course an easy option, but the point I’m making is that on this occasion, you could arguably get just as much out of the game without those 8Nm’s.

Next up, Assetto Corsa Competizione – probably the game I play the most at the moment. Starting on 5Nm, I once again found the detailing impressive during more delicate situations such as kerb strikes and bumps. Actually, the feedback over the bumps, in particular, was mind-blowingly impressive.

But the mid-corner feeling wasn’t quite there on the limits, I felt a little lost right in the middle of the corners and didn’t quite know exactly how my tyres were coping under heavy load. Boost Kit 180 plugged in, and similarly to RaceRoom, I really did notice a sizeable difference.

Everything was amplified meaning that mid-corner uncertainty was no longer an issue. My first lap was two-hundredths quicker than my fastest with 5Nm, and my next lap was a further tenth quicker again. However, I am more in tune with ACC than other titles at the moment. This means I am closer to the absolute limits of the sim, and therefore the extra confidence and detail will have a larger impact on the outcome.

I wanted to try a single-seater, so I fired up iRacing next and jumped in the Dallara iR-01 around Okayama. With the Boost Kit 180 plugged in first, everything felt perfect straight out of the box at 100 per cent strength. Great feedback, confidence-inspiring and an instant connection with the tyres and the road.

Back on the regular power supply, I found myself making more mini corrections with the steering. I just didn’t trust the car as much underneath me and I could tell I was tensing up more through the faster corners, as I would be clenching the wheel as I hit the straight.

The fact is though, you still have just as much grip as before, so even though I was tenser and less confident, I actually set a comfortably faster time, as I was still finding more pace in the car and track combo.

Last up, rFactor 2. I started with the 5Nm box this time, and honestly, after the first few laps, I actually checked to see if I had accidentally left the Boost Kit in. The feedback was brilliant, heavier than the other titles I’d tried on 100 per cent power and the detail was really noticeable. In my opinion, rF2 was the title that extracted the most from the regular power supply.

Perhaps unsurprisingly then, using the more powerful power supply felt like overkill. I did manage to go straight out and match the lap time but after that, turned the force feedback multiplier down to a point that was fairly close to the regular supply. This was the first time I genuinely enjoyed the ‘out of the box’ experience more on the regular power supply than with the boost kit, and both gave me equal levels of confidence.

What I mean is that the ceiling of performance is the same no matter which power supply you have. I was every bit as fast over a flying lap with 5Nm as I was with 8Nm’s, but this is logical because the sims don’t change, the car’s capabilities don’t change, so you can drive at the same speed.

The reason I’m saying you will be faster with the Boost Kit 180 is, over a race distance, having that extra confidence and knowledge of what the car and tyres are doing underneath you, could help you drive at your limits on a more consistent basis.

Like when you are braking in different positions and taking different lines due to tyre wear or brake temperature across a stint. In these scenarios where you aren’t relying on muscle memory and rhythm, those extra newton metres will give you more awareness of the limits of grip, allowing you to push the boundaries with confidence. The closer you are to the limits of the car, the more important this difference becomes, and that leads me on to my conclusion.

If the Boost Kit 180 is worth it or not depends on what you want from your sim racing experience, and how close you are getting to the limits of the car. If you are an aspiring esports racer looking to make the upgrade to direct drive and take on the top drivers, then you are definitely going to purchase it. It will help your consistency and overall race pace.

If you aren’t an aspiring esports racer, and you just want to have some fun with your mates and enjoy your racing games on a high-quality wheel, you really don’t need it. You will still love the experience with 5Nm’s, and at the end of the day, if you are left wanting more in the future, you can always get yourself the optional Boost Kit 180 further down the line. That’s the beauty of this, you have a clear upgrade path and can follow this in your own time.

Full disclosure: The equipment was kindly provided by the manufacturer for review purposes Here is our review policy.