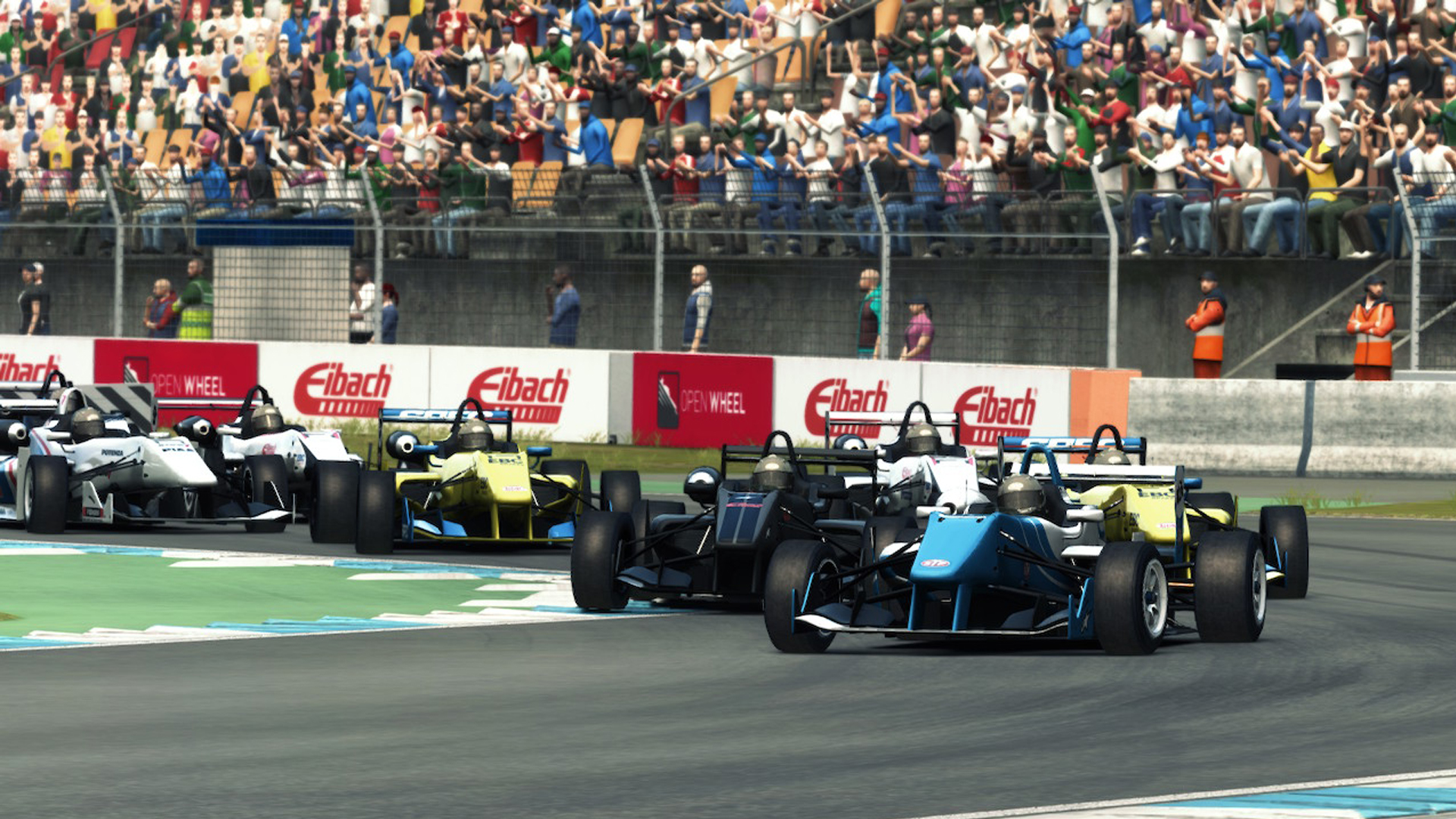 GRID Autosport represents the last flourish of ‘old’ GRID, and came at a strange time for Codemasters. By 2011, its racing games were suffering from an identity crisis, changing tack drastically as sunshine, attitude and personality were ripped from the design briefs, replaced with grittiness and solemnity. Just look at the difference between Colin McRae: DiRT 2 and DiRT 3 for evidence of that.

Why did this happen? The usual story: a small but all-too-vocal backlash made positivity and self-belief appear to be a repellant. Suddenly unsure of whether to offer one thing or another, GRID Autosport held up its fireproof gloved hands in surrender and just gave the player a simple, no-frills choice.

You can choose from Touring Cars, single-seaters, endurance races, modded cars (including drifting) or street racing. Mixing and matching disciplines is fine, or you can just play one tier to completion.

Upon its release, this career structure appeared diminutive, though the racing was clearly still excellent at its core. When viewed through 2022’s eyes, however, GRID Autosport might have been on to something. So let’s see what the genre could still learn from this modern classic.

As long as it’s on the list, GRID Autosport will address you by your actual name in menu screens and during races. It was a masterstroke back in the original Race Driver: GRID and it just never gets old.

Granted, in Autosport your rivals are silent – in the game’s stablemate predecessor DiRT 2 you were called by name by the narrator AND the other drivers as they goaded you and told you off for using them as the brakes – but the game is clearly better for its inclusion, making you feel part of the game world.

I can well imagine it takes a lot of time to record and implement this ostensibly small feature, but the gains are clearly worth it for those who aren’t called Bort.

Codemasters itself has since rediscovered the joys of rivalries in racing games, as recent F1 titles see you facing off against not only a chosen foe but your team-mate too.

But what really makes Autosport exciting is seeing the name of your rival appear above their car. All the drivers are named and their positions are kept in the championship table, but it’s only your chosen rival that gets their name emblazoned above their car, giving you a clear target to focus on.

In a pack of otherwise faceless drivers, zoning in on your arch-nemesis is a fantastic feeling and makes the game so much more engaging… especially when you manage to squeeze them into a wall or punt them onto the grass. There’s nothing quite like seeing that dot slow and stop on the track map. Hehehe.

I’ve spoken about this plenty of times before, but old GRID did damage really, really well – far better than most modern titles (Wreckfest and BeamNG.drive excepted, of course). Not only do you get wonderful crumple physics, race-ending wheel amputation and a detailed explosion of glass shards as windscreens smash in slow-motion, you also get mechanical damage that affects the gameplay.

It was particularly noteworthy – bordering on intrusive – in the original Race Driver: GRID, but in Autosport it’s been balanced admirably. Small impacts might see the engine cover fly off, but that won’t necessarily affect your car handling. More pronounced prangs will put your steering out of alignment, and others will knacker your suspension or engine.

As long as terminal damage is avoided, you can still live with these issues hampering your race, and you learn to work around them. I even finished third with a front puncture.

Unlike other games that make you race trucks, then go-karts or even on the moon, in GRID Autosport you can just stick with what you love. You won’t have the longest career mode you’ve ever played, but there’s plenty of fun to be had, and some management sim-lite decisions to be made over car sponsors and their objectives.

While it’s not particularly deep, some elements can be expanded. For instance, there are optional qualifying and practice sessions on offer for most events, and as you gain XP you can get better contracts that allow you to start tinkering with your car’s setup.

But best of all is the constant use of championships, where drivers carry points into the next race. It seems a small and obvious feature, but too many games use faceless drones in one-off events so nothing ever feels like it means anything. In Autosport, driver names and positions are shown in the top-left, so you can do the sums as you race to work out where you need to finish in order to secure the win or your objective. That’s awesome.

The AI in GRID Autosport is exemplary. You can have actual races with these computer-controlled cars. They change position when driving defensively and try alternative lines in order to try to catch you up, straight-lining it over corners and sometimes overcooking their entry speed, skidding around Paddock Hill Bend in a power drift.

And somehow, even when you’re winning, it manages to feel like the guy in second place is simply trying really hard to stay with you, rather than rubberbanding the pack to keep someone consistently on your tail. This is likely the result of deliberate coding, as evidenced by the player’s ability to toggle their team-mate’s race strategy by pushing L/R.

Wingmen can push, hold, defend or attack on your command, so presumably, these attitudes are available to the AI drivers too. Either way, it feels far more organic than the obviously scripted AI mistakes of Race Driver: GRID, and the gutsy AI behaviour makes for exciting races. Along with the damage system, it’s exactly this sort of gameplay system that’s been scaled back in modern racing games and that trend needs to be reversed.

This one’s controversial but it was adopted by a great many racing games after making its debut in Race Driver: GRID because it’s a great idea. And that idea is simple: If you make a mistake or crash out, you can rewind the action to a point before the mistake was made, and resume playing from there.

Trouble is, use too many of these and the game becomes completely consequence-free, as you can simply rewind every time you do something wrong, taking all the skill out of the game. GRID Autosport acknowledges the usefulness of the feature but limits its uses depending on your skill level, which is clearly the best way to do it.

Just don’t forget that real-life racers don’t get any mulligans, and you’ll learn far better racecraft if you don’t reach for the rewind button instinctively every time you touch the wall.

So there it is. It seems like a simple list, doesn’t it? But the thing that hurts the most is the age of the game we’re talking about. Sure, it’s a modern release on Switch, but it’s still a game from 2014. That’s a long old time ago now.

Should it still be one of the best examples of racing game design considering how much technology has advanced since the PS3 and Xbox 360 days? No, it shouldn’t. But it is.