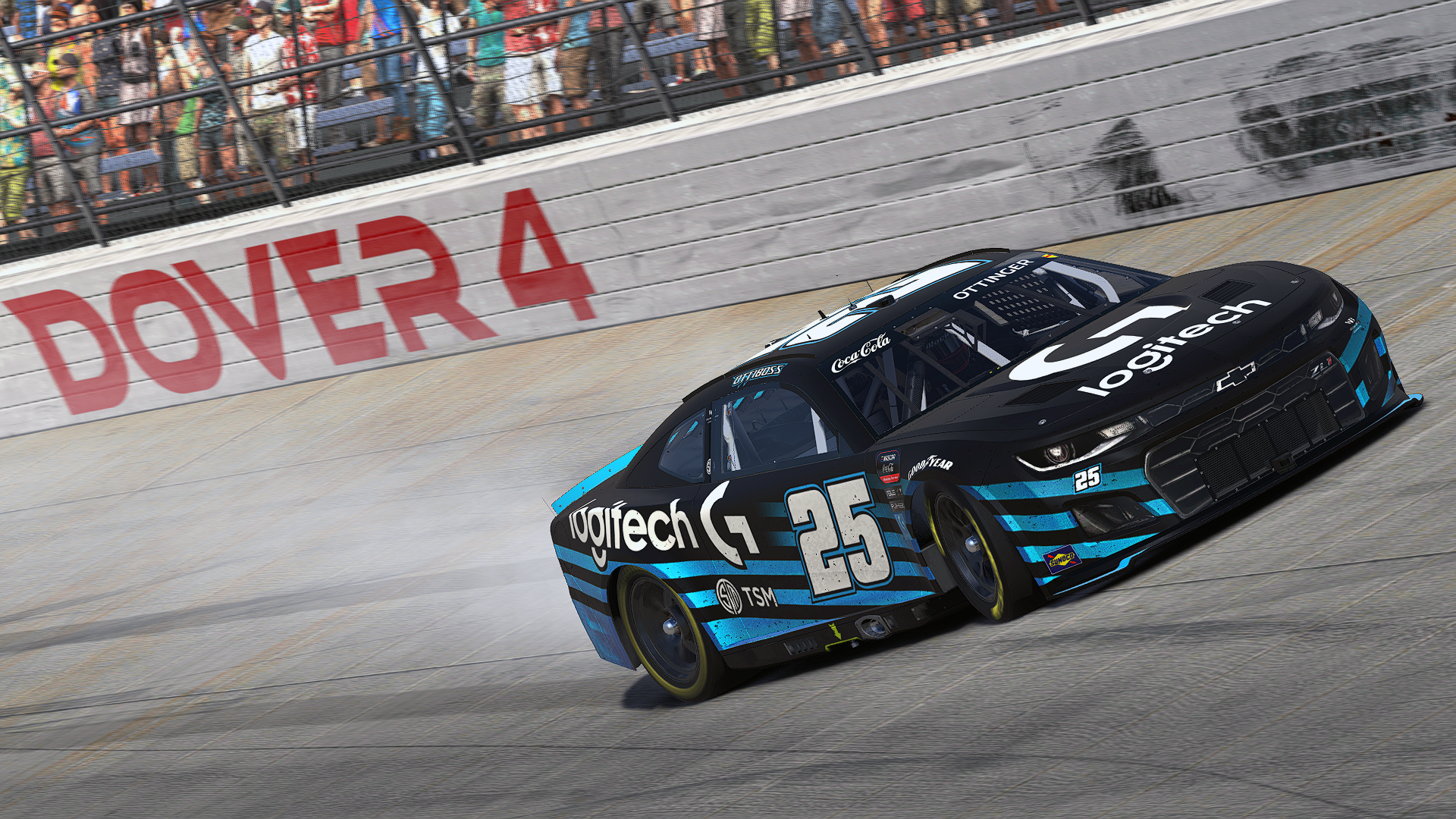 For the second eNASCAR Coca-Cola iRacing event in a row, and for the second time at Dover in a row, Nick Ottinger was victorious on Tuesday night as he collected his 19th career series victory.

It was two in a row, in more than one way for Nick Ottinger (William Byron eSports) on Tuesday night (26th April). The eNASCAR Coca-Cola iRacing Series found themselves at Dover Motor Speedway for the sixth race of the 2022 season.

It was the first visit to the venue since 2020 where Ottinger was victorious. Coming fresh off his first win of the season two weeks ago at the Bristol Dirt Track, Ottinger went back-to-back to score his second win of the season, third career win at Dover and the 19th win of his career.

“I love coming to Dover,” Ottinger said post-race. “I expect to run good every time, but at the end of the day, it’s just like it was tonight. We had a different strategy that didn’t work out for us… but we lucked out.”

Ottinger becomes the second driver with multiple wins on the 2022 season, joining his backend teammate Michael Conti (JR Motorsports) in that category. Steven Wilson (Stewart-Haas Esports) finished third and Femi Olatunbosun (Clint Bowyer Racing) finished fourth, and they are the other two drivers with wins on the season so far.

Ottinger took the pole quite handedly over the rest of the field, laying down a blistering lap of 22.298 seconds. Matt Bussa (Mode Motorsports), another Team Conti driver, started alongside on the outside pole position.

At lap 17, the caution flew for the first time after Blade Whitt (Wood Brothers Racing) and Collin Bowden (eRacr) collided out of Turn 2. At that point, 38 of the 40 drivers in the field opted to pit. The only two to stay out included Liam Brotherton (Elliott Sadler Esports) and the race leader, Ottinger.

At that point, Ottinger was able to keep himself in the lead through the barrage of cautions that followed, but he was at a disadvantage in fuel to the end. After 38 laps and a handful of cautions, Ottinger finally decided to pit, but 25 other drivers at that point decided to stay out.

While his backend teammate Conti led the way, Ottinger attempted to work his way up the field. His fuel situation was a lot better than the others who pitted 20 laps prior, but it was still going to be close. Also, working through the field, his tires seemed to wear at a faster pace.

On that long green flag run, Ottinger made it back up to eighth when the caution flew again. As it was all night, once again the No. 25 went off strategy. The team opted for two tires and track position. This put Ottinger in second on the next restart alongside Malik Ray (iRacing Motorsports).

Ray had damage and didn’t get a good launch, which gave Ottinger the lead once again. As they battled behind, Ottinger was able to maintain the gap and score another Dover victory, increasing his points lead after six races.

A FEAST FOR MILES THE MONSTER

The Monster Mile is known as a self-cleaning surface, as the banking continues through the straightaways, as well as the corners. Speaking of corners, the surface drops entering both Turns 1 and 3, to where the car travels a couple of stories before it lands. Exiting Turns 2 and 4, drivers experience an elevator feeling as they travel back up the distance they fell into through the corners.

It’s a momentum-based track for that reason, and so the cars are always wound up throughout the entire track. Therefore, when wrecks happen, they usually happen big.

That was the case on Tuesday night. Miles the Monster was a hungry fellow and more than half of the competitors found themselves involved in at least one major incident throughout the night.

In eight cautions, hopefuls such as Ryan Luza (XSET), Logan Clampitt (William Byron eSports), Jimmy Mullis (Rise eSports), Keegan Leahy (23XI Racing) and Graham A. Bowlin (Charlotte Phoenix) all found themselves in trouble alongside a majority of the field.

The main hot spot for these cautions came between the exit of Turn 2 and the entrance to Turn 3. Stewart-Haas Esports driver Steven Wilson told Traxion.GG that there were bumps exiting the corners that would make the car become uneasy.

The lap 17 caution that started it all? Whitt looked to lose the nose over the bumps as Bowden held it low off of Turn 2. The result was a pair of spinning cars. Clampitt’s big wreck, which included Leahy, Luza, Kollin Keister (Charlotte Phoenix) and others, also started in a similar fashion.

The final caution of the day was for an incident out of Turn 2. Battling for second, Bobby Zalenski (Joe Gibbs Racing) and Corey Vincent (Team Dillon Esports) made contact as the cars both wobbled into each other out of that corner. Zalenski went from win hopeful to a 29th place finish in one fell swoop.

STEWART-HAAS ESPORTS BACK ON TOP OF THE TEAMS

Wilson was also disappointed in a third place finish at the end of the night. Finishing behind Ottinger and Vincent, Wilson just never had the track position to make a proper charge for the victory. However, he and his teammate Dylan Duval avoided all of the calamity, and with their success, Stewart-Haas Esports now leads the team standings six weeks in.

Jim Beaver Esports is only six points behind after Blake Reynolds finished 10th and Michael Guest took home 11th. The Beaver boys had the lead two races ago entering the Bristol Dirt race, but lost it to the newcomers at the Charlotte Phoenix following great runs from Bowlin and Keister. Unfortunately, neither Phoenix drivers had a great night in Dover and now they sit fourth overall.

They’ve also been passed by Team Dillon Esports. Vincent had his runner up finish at Dover, but his teammate Taylor Hurst also finished eighth. Team Dillon is the only team after six races to have both drivers inside the Top 10 in the standings.

NEXT UP: A KANSAS LOTTERY

For the sixth time in eNASCAR Coca-Cola iRacing Series history, the field will visit Kansas Speedway for a 100-lap battle around the 1.5-mile venue. For those keeping score at home, Ottinger will likely be the favorite entering.

In five previous races at the track, Ottinger has two victories, including the first win in 2013 and the 2020 win that propelled him to his first career championship. Other winners include Leahy (2018) and Zack Novak (Rise eSports, 2019). Last season, Chris Shearburn was able to score the final victory of his career at the track.

Tune in at 8:30 p.m. ET on 10th May to see it all unfold. Things will kick off with the Countdown to Green for a half-hour before the main cast starts at 9:00 p.m. ET. The broadcast will be available at eNASCAR.com/live or on the iRacing Social Channels.