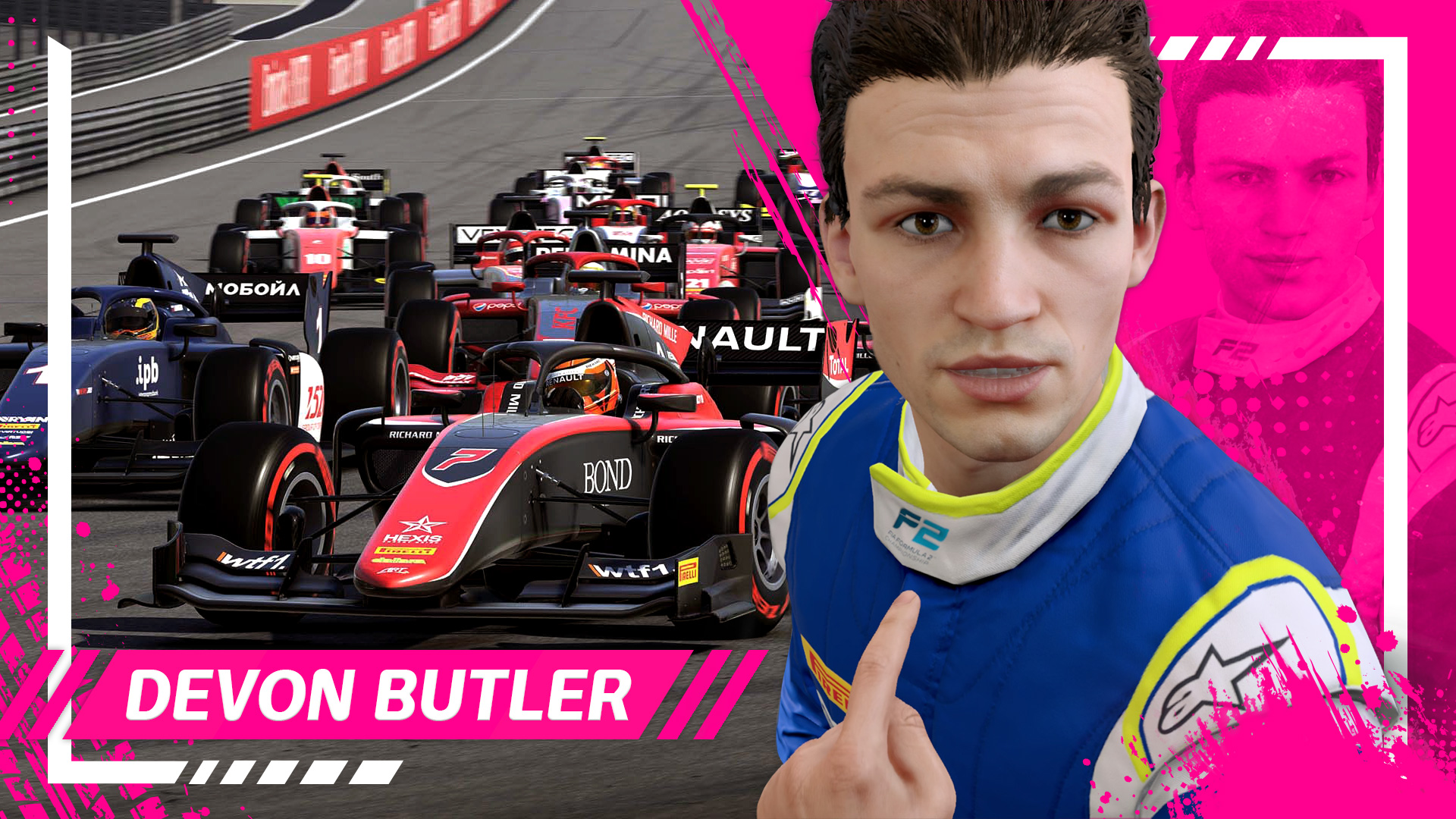 The initial reveal trailer for the upcoming F1 2021 spilt very few beans as to the next-gen upgrades, online multiplayer features, gameplay changes or My Team enhancements – the items that an invested F1 game fan may be chiefly interested in.

Instead, it layered on the drama, with David Croft shouting about fictional characters racing, pretty CGI visuals that showcased fantastical crashes and someone shouting, “you want respect, you give respect, that’s how it works!”

While one of the characters sounded a little bit like Red Bull Racing Principle Christian Horner’s best Drive to Survive voice, it was in fact Devon Butler. And, if your immediate response to that was ‘who?’, then you’ve found the right article.

The man, the myth, the legend

Devon Butler is a fictional character created for the Career Mode in the video game F1 2019 by Codemasters.

This heralded the introduction of a storyline, which saw you – represented in cutscenes from a first-person perspective – going up against two rivals. One, the affable Lukas Weber and the other villainous Devon Butler.

It would appear from the F1 2021 teaser trailer that Devon Butler will be returning to the series after F1 2020 did not have a story to play through. It instead focused on the then-new My Team mode as the main single-player innovation.

You started the Career Mode in Formula 2, the F1 feeder series and also new in-game for 2019, mid-race at the Circuit de Barcelona-Catalunya. With just a few laps to go, you encounter a turbo problem and are tasked with making a decision. Let your colleague, Weber, through and help the team, or fight tooth and nail until the bitter end.

From there, you are introduced to arch-rival Devon Butler who plays the swash-buckling, feather-ruffling, bravado-fuelled junior driver who believes he’s destined for greatness. In other words, a bit of an annoying sod who lives an ego-led life.

After three short F2-based driving scenarios, the second one at the Red Bull Ring and the third at the Yas Marina Circuit, the all-too-brief escapade is over. You and your two chief rivals all progress into Formula 1 where the battle continues in the premier class.

Except, it doesn’t really.

Sure, Weber and Butler are on the grid – replacing a couple of real F1 drivers in the process – but there’s no more interaction with them. That’s it, the book is closed.

Devin is a spikey character, with a certain swagger about him that imbues arrogance.

“Congratulations. Enjoy it because it’s the last time it’ll ever happen,” ‘Dev’ half-heartedly mumbles to you after you win the F2 championship.

It’s these backhanded compliments mixed with outright hubris that make the character so repellent, yet also so intriguing.

Before the title-decider, he’s already lost his temper about some on-track contact: “I’m sorry for ever giving you the common respect that all racers deserve, because you don’t deserve it.”

His parting gift, and the last words he uttered until the F1 2021 clip, insinuated that he didn’t need to win the F2 title, because he was already destined for stardom anyway.

“Well, this has been a lot of fun. I’ve got to run. Things to sign, important paperwork and all that. I’m sure you understand. Ciao.”

It’s fair to say that Devin’s character is pompous in the extreme, and a caricature of a real F1 driver. Consequently, the ramped-up nature of the script means meme creators world over had a field day.

To which we say, roll on F1 2021. Even the official Codemasters social media accounts seem to be on the Devon Butler meme bandwagon.

What we know about Braking Point so far

As I’ve already mentioned, Devon makes it into the top category in F1 2019. But as he’s in the F1 2021 trailer, my first thought was that the new story – entitled Braking Point – either continues on from two years ago or starts afresh in F2 against a new set of rivals, before you progress into F1 against Devon.

Unless of course, the plot goes full four-hour Zak Synder by demoting Devon to F2 from F1 and then witnesses a meteoric return to his rightful place. I suspect that might be a bit of a stretch…

We also know that there will be some sort of team manager or engineer involved, signified by the person wearing a cap in the footage, which reminds us of Rick from TOCA Race Driver 2 and 3 – both Codemasters games from several years ago.

Either way, Braking Point is set to be much more dramatic than the previous attempt, with Devon stating: “It’s a brave man to admit he can’t compete anymore.” Colour us perturbed.