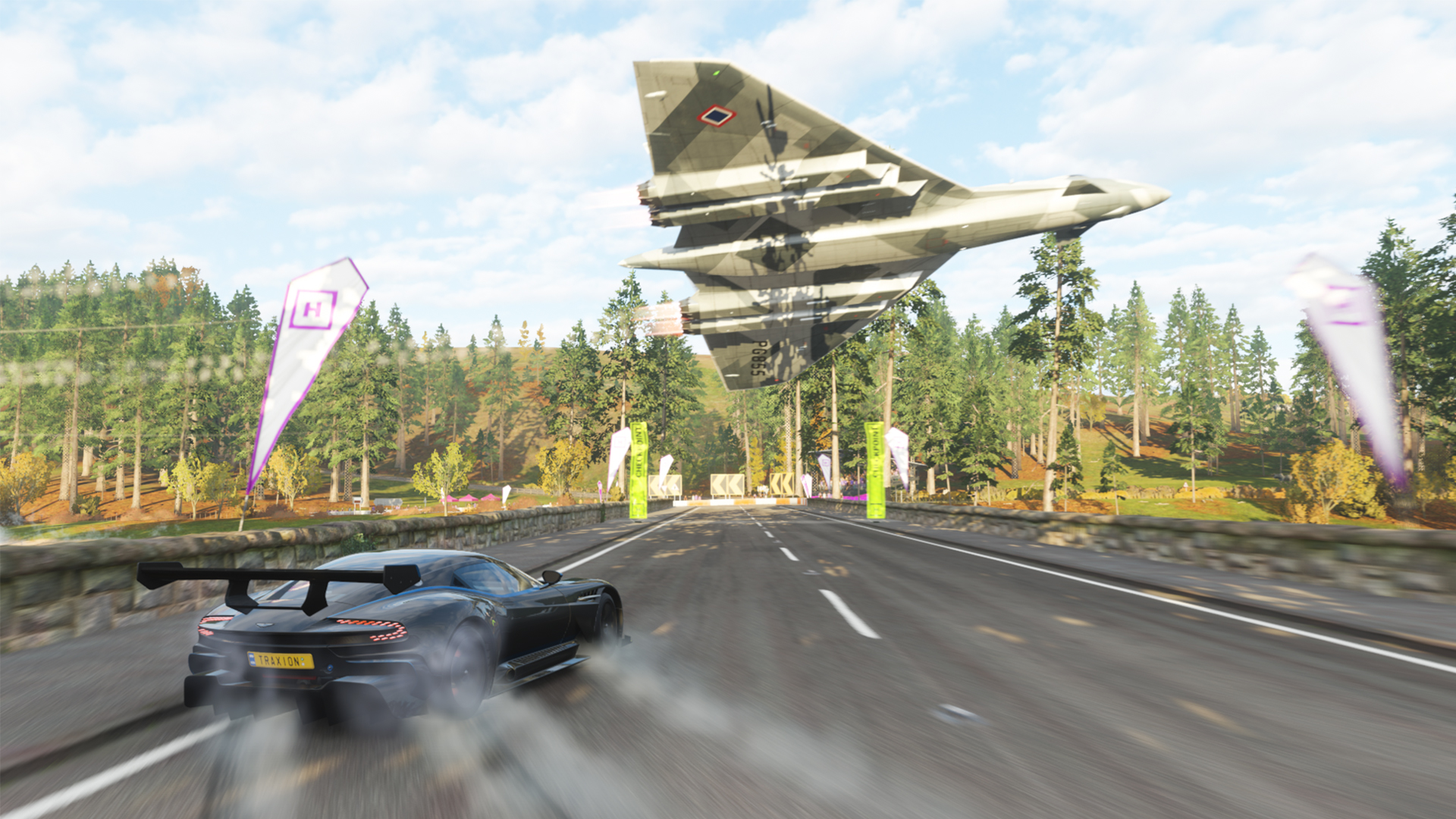 The Forza Horizon series is one of the most played racing and driving games around with a huge active player base. Across four games, we’ve been treated to glorious recreations of Colorado, the South of France and Northern Italy, Australia finally the United Kingdom, with a few DLC diversions into the Fast and Furious, Hot Wheels and Lego Franchises along the way.

The Forza Horizon showcase events are some of the most cinematic experiences available in gaming today, as you race your car against varied machines across a range of epic and unique races.

Coming in at number 10 from the latest game in the series, Forza Horizon 4, is the Behemoth Showcase. You take the reins of the Toyota Baja that is, in slightly ridiculous fashion, competing against a gigantic hovercraft tumbling down the Scottish Highlands.

The hovercraft’s size and water-based advantages makes for an epic race against the off-road pedigree of the Baja.

If you’re yet to complete this showcase, we suggest positioning yourself over to the right-hand-side on the final run as it’ll give you a slight advantage on the dash to the finish line.

The original Forza Horizon game bought us these epic showcase races for the very first time. Although they could be considered tame compared to later versions, they were a novel addition to the franchise and laid the groundwork for future instalments

This showdown takes place through winding Colorado roads and tunnels, pitting you directly against a Bi-Plane in your Ferrari F40. The car’s lively handling, paired with the visual effects of the Bi-Plane make for an incredible showcase event, particularly if you’re playing this in 2012, when the game was first released.

Speedboats versus the iconic Toyota Baja… if you’re not afraid of a few over-the-water jumps then you will love this incredible showcase event. Taking charge of this iconic truck blasting through the Australian Outback as you navigate rivers, hills and jumps with a roaring 800 horsepower V8 engine is an absolute joy.

In probably one of the most bizarre races on this list, your mid-engined Lancia 037 is racing against…. 37 hot air balloons. It’s quite hard to tell how well you’re progressing against your rivals throughout the showcase as there are so many of them and they are fairly slow-moving. Nevertheless, we applaud the developers for thinking outside of the box in this enjoyable and challenging event in the third Forza Horizon game.

Steam-power or high octane gasoline? The iconic Flying Scotsman train, for those that didn’t know, was built in 1923 for the London to Edinburgh train service, with two world records for steam traction. Competing against the peak of 1920s rail engineering is the nimble Ariel Nomad – a specially adapted Atom with larger tyres and advanced suspension. First one to the Edinburgh train station is the winner in this challenging showcase.

Lambos are pretty fast but so are fighter jets. It’s hard to imagine that this wouldn’t be a straightforward victory for the fighter jet but if you can suspend reality for a few minutes then you’re in for a treat. The all-wheel-drive, hard-topped Centenario (created to celebrate Lamborghini’s 100th birthday) is ridiculously fun to drive through Surfers Paradise.

One of the top tips for victory is to maximise your exit speed from the 90 degree turns, giving you a good shot an passing this one with flying colours.

Who doesn’t love a good crossover? Halo and Forza united for this incredible showcase event that sees you racing to escape an unstable Halo Ring, narrated by Cortana and joined at points by other Spartans in their Warthogs as you try and make it to a Pelican escape whilst avoiding Banshees.

It isn’t the first time the Warthog has appeared in the Forza Franchise, but Playground Games implementation of Halo in the Horizon world is sublime and brings back nostalgic memories of experiencing the Warthog in the Halo series.

Take on the best of British Supercars, the Aston Martin Vulcan against the Delta Wing through the hills and countryside of the United Kingdom. The roar and rumble of the delta wing through your speakers, controller and with a not-insubstantial camera shake, makes for incredible gameplay as it passes you by mere metres from your car. The tail-happy traits of the Vulcan means that you’ll need to be at your best to win this showcase.

In a battle that no self-respecting health and safety inspector could ever recommend, your task is to race a freight train through the Australian outback. Make sure you get to each level crossing before it does and hit those jumps before several thousand tonnes of train go through the side of that Chevy….

The off-road parts of the track give the showcase an additional technical challenge to this titanic battle.

Finally, at number one is the Il Tricolore Aereo from Horizon 2. Driving your Ferrari 360 CS against a display team in a spirited drive around the coasts of Northern Italy, darting through tunnels and being regularly buzzed by the planes. Climaxing with a dash to the line allowing you to really see what the Ferrari can achieve.

This showcase really encompasses everything which is great about these events, a beautiful location, an iconic car and an intense race

Well now you’ve seen our choices, what do you think? Did we get it horribly wrong? Right? Or somewhere in between? Tell us what your favourite showcase events or give us your opinions in the comments below.

With Horizon 4 still having an extremely active playerbase, we have a bit of time to wait until the next instalment of the Horizon franchise to be announced – who is looking forward to seeing where the team at Playground Games take us next?