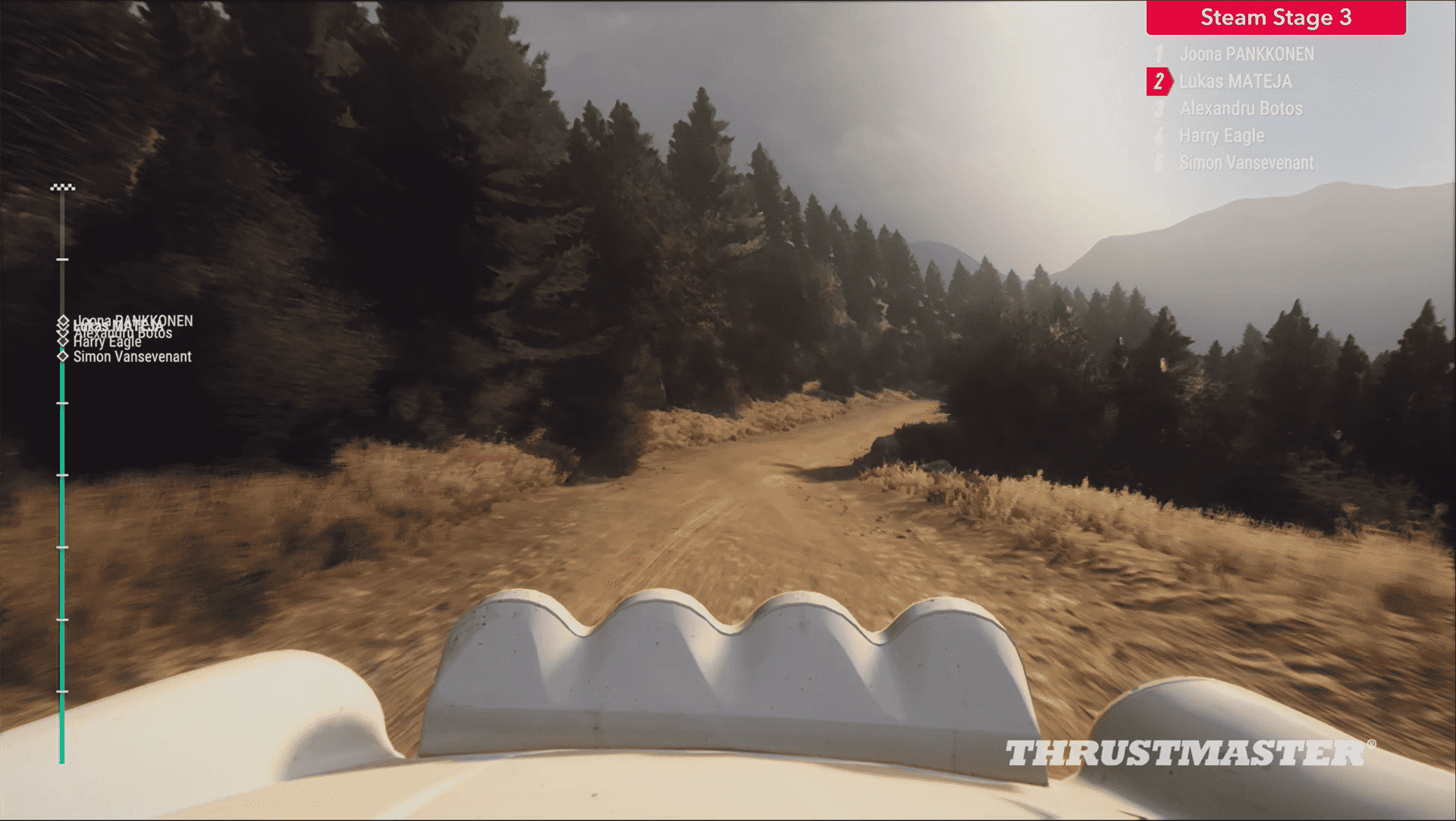 After 3 Qualifying Finals, the top rally qualifiers from each platform battled it out for a place in the Grand Final. Using the same format as qualifying finals, the cumulative time from the 3 times stages will decide which 2 from each platform will be going through for the chance to win the overall title.

Unlike in the qualifying finals, the 3 stages in the semi-finals would challenge the drivers with different surface and weather conditions on each. Starting with a snow blast in Sweden, the players then took a visit to Germany in the wet, followed by the gravel of Greece.

With so much riding on the 3 semi-final stages, Xbox players had the nervous job of being first on the road. After cruising through the qualifying finals, it was Jarod Pesch who came out the blocks first winning the opening snowy stage by just under a second. A relatively quiet stage for all the players proved this was more about survival than anything.

The German tarmac was wet making stage 2 very tricky indeed. A very near miss on the hinkelsteins for Paul Beghin gave everyone sweaty palms, but it was Andrea Torlasco who nailed the setup and took victory in the wet, leading home Pesch in second. 10 miles of gravel would prove to be the decider and so it turned out to be.

After having to restart the stage due to connection problems, all the competitors had an anxious wait before the second run through. When we finally got underway all the players were close at the halfway point, but it was the second half where mistakes for Beghin and a DNF for Torlasco put a stop to their campaign. Unbelievably, Karl Reinoja cut the last corner too much and was sent onto two wheels into the undergrowth. After running second, the excursion would cost nearly 10 seconds and crossing the finish line in 4th meant he would miss out on the final.

That left Théo Rochelle to cross the line second, and also close the gap booking himself a place in the final alongside Pesch who dominated the last stage, winning by over 12 seconds.

Players on Steam were up next and disappointment struck early for Luca Giacomin who wouldn’t start due to hardware problems, leaving only 5 competitors to fight it out.

Another unlucky moment came for Harry Eagle in stage 1, miss-judging the snow bank cut too much and launching into the trees resulting in a 4 second penalty. The stage was won by Lukáš Matěja ahead of reigning Champion Joona Pankkonen, but it was close, only 0.7 seconds covering the top 3.

More bad luck for Eagle who didn’t start stage 2, leaving Matěja again to take victory on the German asphalt. However, Pankkonen was still right with him and showing again it would be an intense battle between these two.

With such a long stage 3 it was a mission to conserve and maintain for the top 2. Having a gap over Alexandru Botos in 3rd, the aim was to have a controlled run through with no big risks. Pankkonen took the honours on the final stage, winning by 3 seconds over Matěja securing their seats in the Grand Final.

The last platform to run was PlayStation, and with 4 players locked in it was a tense battle for the final two Grand Final positions.

The Semi-finals would once again only be tackled by 5 competitors after Tiana Rakotonaivo retired last minute before the start. So the action commenced in Sweden, Robin Jonsson came out storming and set a blistering stage time, quicker than all the other competitors across all platforms. However, the entire PlayStation field was separated by 4 seconds so it was going to be close.

Quentin Dall’Olmo proved he was a tarmac ace in the second stage; while 2nd – 4th was only separated by 1 second, Quentin won by nearly 2 seconds, his nearest rival Jonnson in second. With a different winner in stage 2, it meant the top 4 drivers were going into the final stage with a gap under 4 seconds.

Unfortunately for Jonsson, a mistake very early in the stage left him trailing the field, and even a committed run through was not enough to make up lost time. It was Nicoló Ardizzone and Iwata who were battling throughout, trading fastest times the whole stage, but a tiny barrier tap from Ardizzone left Iwata to take the win, but only by a 1 second margin. The great pace from Ardizzone meant he overcame the 3.8 deficit he had coming into stage 3 and joins Iwata as the two PlayStation rally finalists.

After a nail-biting and hugely competitive semi-finals, the only remaining challenge for our players is the Grand Final. With their place now secured, only the 6 stages remain to decide who will be crowned the DiRT Rally 2.0 World Series Champion for Season 2. Due to the cancellation of the Autosport International Show, the final will be held remotely on Saturday 27th February.