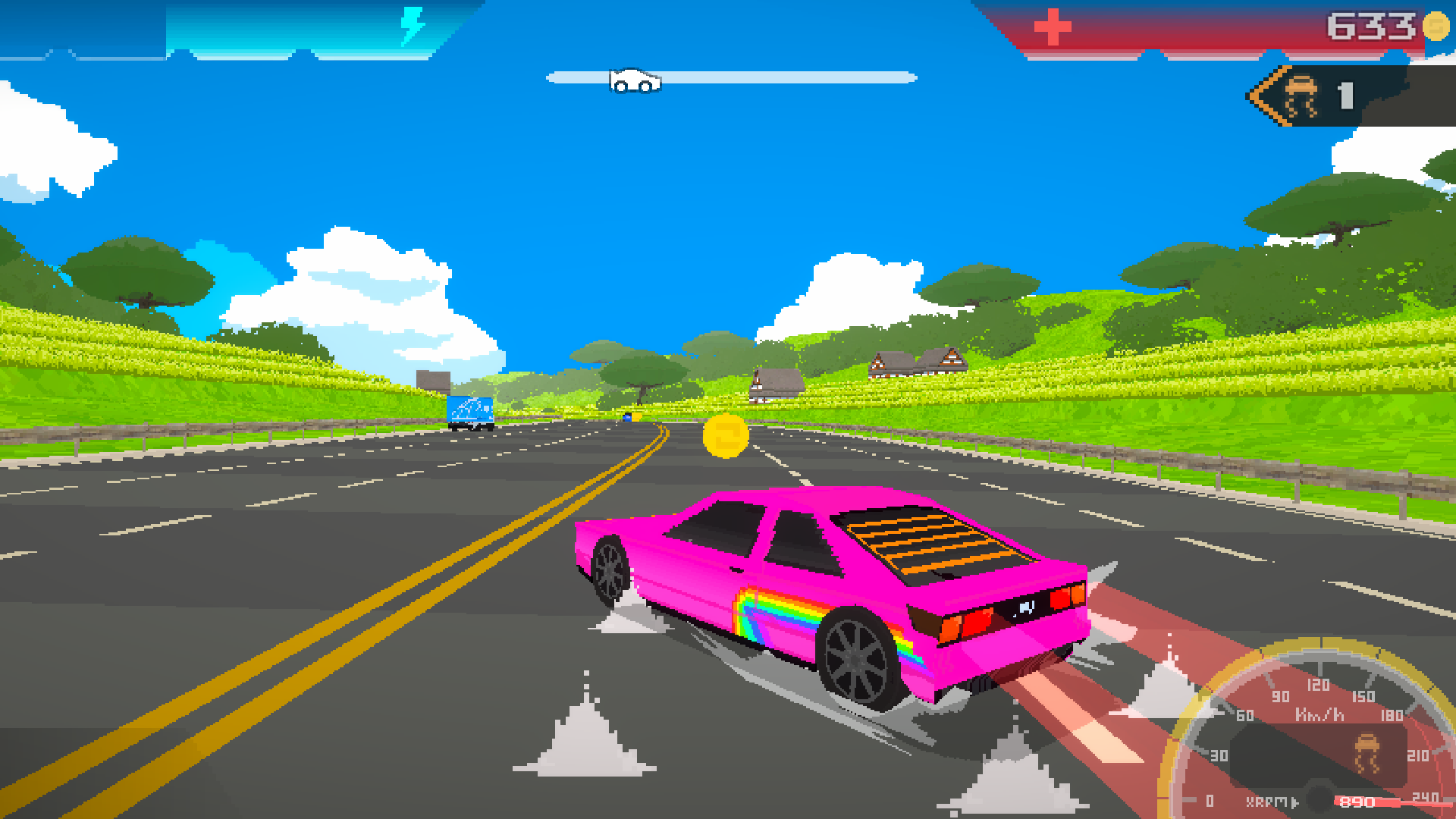 Strobetano’s Neodori Forever is a retro-inspired racer where drifting takes centre stage. Does it skid into the sunset or stall at the start line?

Neodori Forever is a retro-themed racing game by indie developer Strobetano. Inspired by arcade classics like Outrun, the aim of the game is to drift through courses created from 10 different environment types, defeating a cast of eclectic street racing characters along the way.

Thanks to a flood of indie racing games over the last year or so, including the likes of Gravity Chase, Slipstream, Horizon Chase Turbo and Victory Heat Rally, fans of the genre have never had it so good. But is Neodori Forever good enough to stay at the front of the pack, or is it stuck in the Farlands?

The game begins in the Outskirts environment in the default Cyanus car, (no jokes about its name please) with three stages to complete to allow progression to the next environment. Other cars include fictional representations of more famous drift vehicles – Initial D’s Toyota Sprinter Trueno for example.

Players can collect coins and red fuel icons to both purchase new vehicles and increase their cars’ health respectively. Health (or fuel, as depicted by the red jerry can icons) decreases throughout the race – especially if you collide with barriers or NPC traffic. The car accelerates automatically, so using a lift and coast technique to save petrol is impossible. Run out of health and it’s game over.

Blue boost icons can be picked up, which both top up your boost gauge and provide your, ahem, Cyanus with an injection of speed. The boost bar can also be topped up by drifting – the game’s main driving mechanic.

To instigate a drift, you turn in and hit the A button (I used an Xbox 360 controller for this review). The longer you can hold a drift without colliding with obstacles, the more the boost bar will fill up.

The third stage of the Outskirts environment sees your first introduction to one of your rivals. Your opponent suddenly joins the action and challenges you to a race. The goal is not to beat them, oddly, it’s to stay close to them until the end of the stage.

It’s a strange feeling to see ‘You Won’ appear on the screen when you quite clearly finished behind your rival. The rivals themselves drive a varied bunch of vehicles and their mid-race banter sometimes elicits a little chuckle. Angry Tom – the disgruntled corn farmer – was a particular highlight.

Rivals add an element of strategy to proceedings as you’ll have to save some boost in order to see off your challenger. Well, it should be strategic, but there seems to be little point in using boost outside of a rival encounter. There’s no time limit to completing a stage, so it’s better to take your time and top up your health and boost before the real racing starts.

Police chases (triggered when you run over a yellow warning sign power-up) are inescapable. Even when using boost, police cars just cruise past you: their aim is to crash into you. You can take evasive action, but these encounters are more a health-sapping annoyance rather than a barrier to game progression.

The hitbox for the police chase power-up is also not quite accurate enough – on more than one occasion I’ve easily been a car width away from the icon and still felt the wrath of the law.

When you finally beat the game’s 10 environments you’re introduced to the ‘Endless’ mode. This is a potentially infinite blast through all the game’s different environments including a day/night cycle, racing against all your rivals from the main game. It’s an interesting idea, but there’s nothing new on offer other than seeing how far you can travel in one session.

It does allow players the chance to collect more coins, however. And you’ll need to collect a lot of them to unlock all 27 cars. 7,800, in fact.

The main crux of a game like this is the way it feels to throw the car around. Sadly, Neodori Forever’s vehicle physics just don’t feel satisfying to me. Tight corners can only be negotiated successfully through drifting. But knowing exactly how tight the corner is ahead of time is tricky when the courses are randomly generated…

Sure, there are on-screen direction indicators, but they’re simply left or right arrows. So, by the time the curve has tightened you’re already mid-corner and a trip to the barrier awaits. Outside of drifting, the controls are sluggish, which is a huge issue on narrower tracks, or those that have central reservations to negotiate.

I also experienced a game-breaking issue when my analogue stick failed to recognise right-turn inputs – quite important in a fast-paced arcade racer. The controller issues in the v1.03 build were acknowledged by the development team and were solved in v1.04 less than a day later. Kudos to Strobetano for addressing this bug so promptly.

More frustration occurs when rivals spawn from the ether right into your car, depleting its health ahead of a showdown race, my car exploding in a ball of fire while theirs continued serenely. This issue was apparently fixed in the v1.01 patch but was still present in the v1.04 build I played. I may have been unlucky.

Drifting lacks tuneability. While sideways, you can tighten your drift but can’t open it up as intuitively. This is a shame because the game’s ‘80s and ‘90s arcade aesthetic is glorious, the soundtrack is full of electropop-py goodness and the action speeds along with nary a hint of slowdown.

Neodori Forever is perhaps not ideally suited for desktop PC users, but a Nintendo Switch version has been confirmed for release in the near future. Steam Deck users will also be able to play it on the go. It feels like this is the best way to play the game – in short bursts.

The slightly laggy controls – it feels like the analogue stick is emulating a D-pad at times – let the overall package down sadly. Future patching will hopefully resolve ongoing problems like this. But at times, especially in the more open environments such as Desert and Fields, the game was enjoyably frantic.

If you are a huge fan of retro arcade racers then definitely consider picking Neodori Forever up in a sale. Non-uber-fans should wait for the controller issues to be addressed, however.