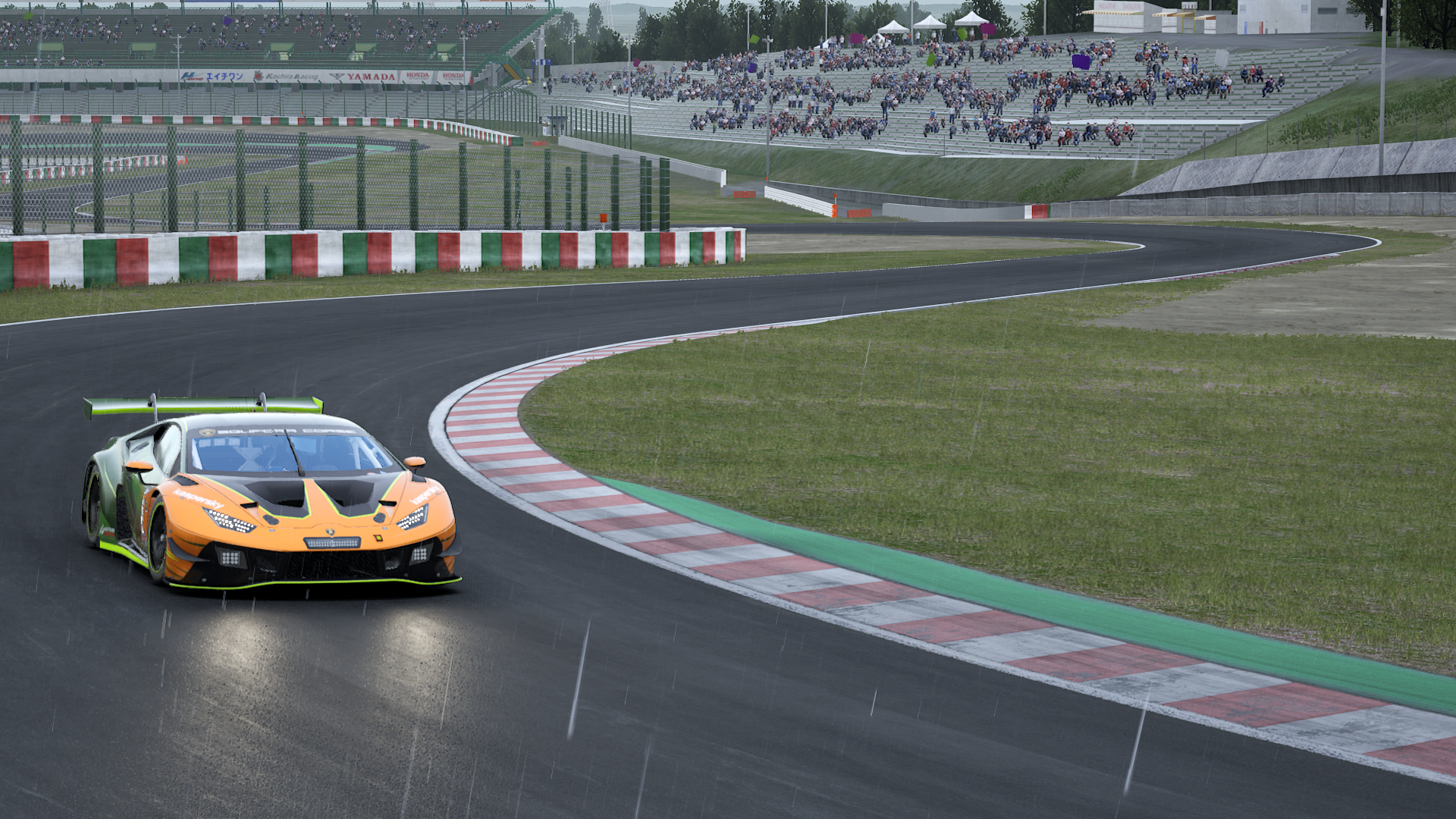 Suzuka International Racing Course, otherwise known as Suzuka Circuit is a 5.807-kilometer (3.609-mile) venue residing in Japan. The Grand Prix layout has 18 turns and features a cross-section bridge where the track goes over itself. Formula 1 will host an event here later in the season, but the circuit also hosts events for sports cars, motorcycles and once held a NASCAR exhibition race on the East Course back in 1997.

As it’s been for the first two races, open qualifying took place from the 19th to the 23rd of July. Once the 20 drivers per region were chosen, closed qualifying set the lineup on the 24th, and the race took place on Sunday the 25th. Andrew O’Hara (APAC), Jordan Sherratt (EMEA) and William Hendrickson (NALA) took the pole positions for their respective regions.

Unlike the first two races, Suzuka only featured one Endurance race per region this time as opposed to two Sprint races. In Endurance races, points are more than doubled as the races are timed for two hours a piece. Only Suzuka, Nurburgring and Spa-Francorchamps are scheduled as Endurance events in the 10-race season.

The featured race streamed this time was the Asia-Pacific region, given the Suzuka Circuit resides in Japan. Andrew O’Hara made his first start of the season on Sunday, leading the field to the green flag in the APAC event. The race timed at two hours and one pit stop required, surely with only local yellows, it couldn’t be a close finish, right?

In the wet, greasy slip and slide that was the Suzuka Circuit, race fans were treated to a brawl in the APAC region after two hours of racing. The circuit started in greasy conditions and progressively got virtually wetter as the race went on. Around halfway, the track was labeled as damp and towards the end, the surface was deemed fully wet.

Egor Ogorodnikov doubled up on wins the last time out at Laguna Seca, entering the third race as the overall region championship leader. After starting alongside and through the first half of the race, Ogorodnikov kept it close to O’Hara, often within a second to a second and a half until pit stops ensued.

A mandatory pit stop meant that it would matter when tires would be taken. An earlier stop before halfway would yield track position, but less speed towards the end, whether it was slicks or wet weather. A later stop would give up track position, but would mean fresher tires on the final portion of the race

It was briefly touched upon in the broadcast, but drivers had the option to decide whether to run slick tires or wet weather tires. It wasn’t decided who was on what tires, but if they were running wet tires on a greasy or damp surface, those tires would wear faster than a slick would. A slick tire would likely not grip as well to the surface the wetter it got.

After retiring from the event early, competitor Andrew Laurenson gave some insight into his strategy in the YouTube chat. He had started on slick tires and planned to run them about half the distance before switching to wet tires. “2:08 should be about the crossover point,” Laurenson said. “It’s a difficult choice as you will burn the edges off the tread blocks if you whack the wets on a few laps early.”

Ogorodnikov took his Lamborghini in just before the halfway mark, with about an hour and two minutes to go. That allowed for an undercut, resulting in a lead of about 16 seconds by the time O’Hara took service with just under 47 minutes to go. With just about 20 minutes, O’Hara caught up to Ogorodnikov’s rear bumper.

The two played chess with their cars until everything started coming undone with about a minute to go. O’Hara made the move into the final chicane and the two made contact, which put O’Hara back into the lead. O’Hara cut the course to do so and had to quickly give the spot back. He got another run a few corners later, and that’s when the fireworks went off.

Ogorodnikov got on the gas too quickly and spun down into O’Hara, sending both in opposite directions. Ogorodnikov got it back under control first and crossed the line 11 and a half second ahead of O’Hara, but the final results show O’Hara as the winner by three-and-a-half seconds. That likely means that Ogorodnikov was handed a 15-second penalty after the broadcast concluded.

Gabriel Felipe scored the victory in the third race of the season, winning by 13 seconds over Igor de Oliveira Rodrigues.

William Hendrickson, who swept the Laguna Seca races two weeks ago, started on the pole but wound up finishing fifth.

19 of the 20 qualified drivers started the event. Fidel Moreira came into the race leading the standings and finished third.

With no Martin Kadlečík in this lineup, the only driver to beat Jordan Sherratt in the EMEA region couldn’t do it again at Suzuka.

Sherratt started on the pole position and manged to win by over 37 seconds over the next fastest in the field, Kevin Siclari.

Points are not showing up accurately on the site at the moment, but Sherratt should be leading by quite a margin after three race events.

The next race up will be at Kyalami Grand Prix Circuit. Open qualifiers start on 2nd August and run through the 6th. The regional sprint races will take place on 8th August. Be sure to watch the APAC race included below.