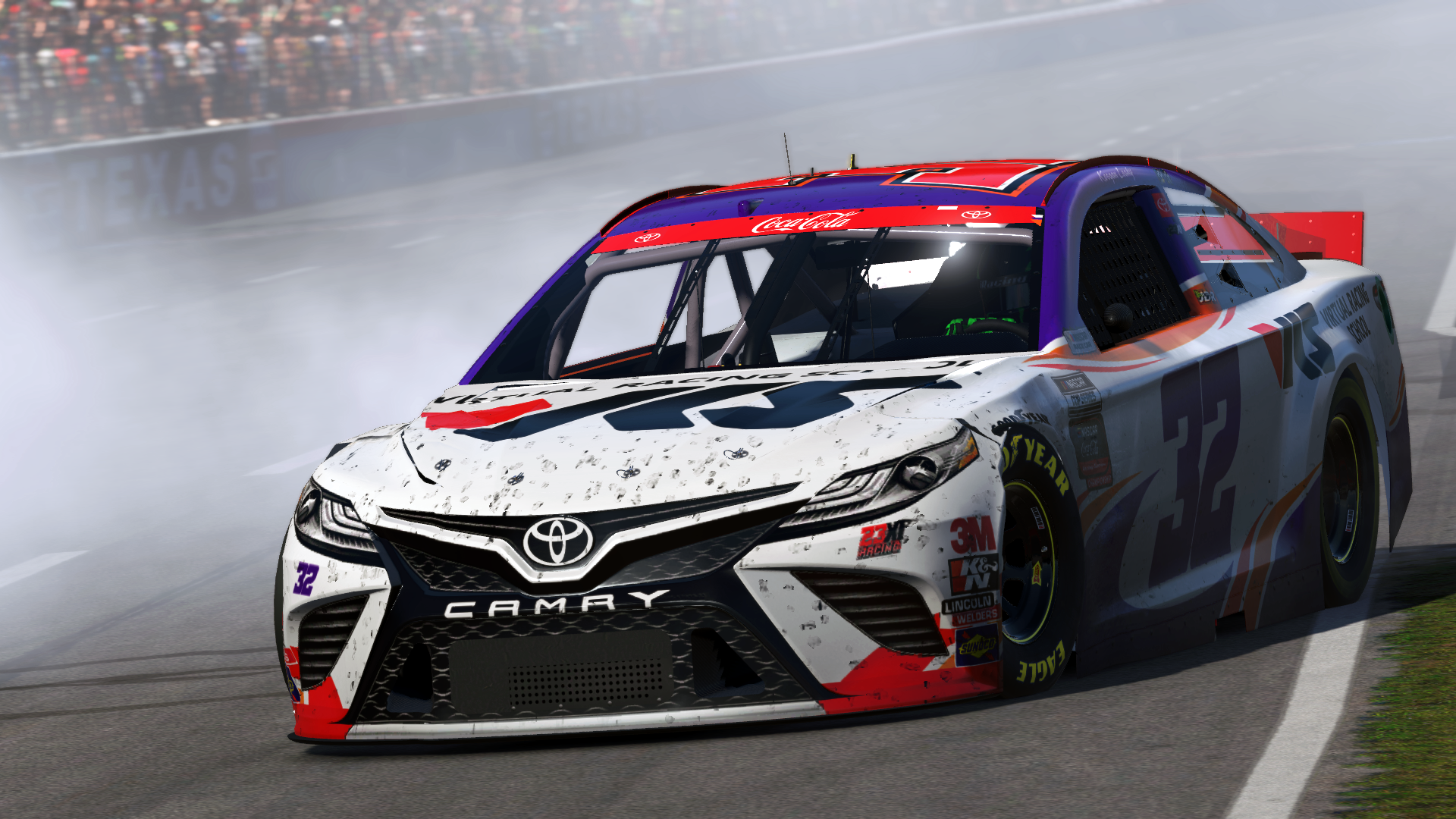 Keegan Leahy is an eNASCAR champion.

Vindicated from his runner-up finish in 2019, Leahy put on a masterful performance on Tuesday night. After starting second alongside his 23XI Racing teammate and Championship rival Mitchell deJong, Leahy eventually worked his way around into the lead. In the final laps, he held off Logan Clampitt to win the 2021 eNASCAR Coca-Cola iRacing Series title.

“It’ll take me a month to process this, I’m sure,” Leahy said moments after taking the title. “This is so huge to me, so huge to the organization. I’m sure it’s huge to 23XI, I just don’t know where to start. Thank you, everybody.”

Leahy led 61 laps, all in the second half of the 167 lap showdown for the title at Texas Motor Speedway. While deJong led the most at 84, it was Leahy who made the right pit call to keep the lead for the remainder of the race. The win is Leahy’s 11th in his career, but it is most definitely his biggest win yet.

The 23XI Racing driver pockets $100,000 as the champion, adding his name amongst the greats like Alfalla, Ottinger, Luza and Conti as an eNASCAR iRacing World Champion.

Last season, a handful of well-placed cautions at Texas allowed Michael Conti to strategize his way to a victory. This year, the field kept it clean and green for the entirety of the 167 lap event.

The pole position went to deJong with Leahy alongside. The duo combined for ten poles in total, as Texas marked the sixth 23XI Racing front row lock out on the 2021 season. Bobby Zalenski was only able to muster a ninth place starting position, but all eyes were on Clampitt who wound up starting back in 31st.

From the drop of the flag, deJong was able to pull himself and Leahy away from the rest of the pack. Zalenski struggled to make passes, hovering around eighth to tenth for the majority of the night. Clampitt had a bad fast setup, managing to crack the Top 20 by lap 14. By lap 43, he was in the Top 10, but the pit window was fast approaching.

TWO STOP STRAT FOR ALL

The way the math worked out, those attempting two pit stops would need to pit between laps 50 to 60 and then laps 105 to 115. If anyone was going to attempt one pit stop, it would mean stretching tires and fuel to a range of laps between 80 and 85.

Unfortunately, we never got to see if a one stop strategy would work as everyone in the field opted to go for two. It would likely have meant stretching the gas tank too far, ultimately giving up too much time, but you always have to wonder if any of these drivers are willing to do whatever it takes for a victory in the series.

On the first round of stops, Zalenski led the group running for the title into the pit cycle. He cycled out in fourth, but with having older tires, he fell back to where he was running fairly quick a few laps later. Both Leahy and deJong pitted together a few laps later and retained their spots. Clampitt waited longer to pit, giving him the freshest tires for the second run.

Clampitt moved into the fourth position on lap 90. Two laps later, Leahy turned on the back burner and made his way around deJong for the top spot. It would ultimately be the pass for the title, but there was still one more pit stop needed to decide everything.

The question of when to take the final stop played into all four driver’s minds as they neared the lap. Ultimately, it was Leahy kicking off the pitting party, coming down on lap 112. Clampitt reacted first and came down for service on lap 113. deJong waited it out, hoping to have enough of a tire advantage for the end, pitting on lap 114. Zalenski waited two more laps after that, coming down on lap 116.

Leahy opted to pit earlier so that he could retain the lead. It meant giving up a fresher virtual tire at the end, and it meant the other three would be able to reel him in under the right circumstances. Leahy hoped the clean air would be more important, and he was right. Clampitt was able to close in as close as three-tenths behind, but could never overcome the rest of the gap.

Meanwhile, deJong fell back as far as he had all race due to waiting to pit, which pretty much negated any tire advantage he may have gotten since he needed to pass more people. Zalenski just wasn’t able to make the moves, and would have needed a caution to get back into it. That caution never came, and Leahy held on for his first career title. 23XI Racing also claims the 2021 Team Title.

Coming into the finale, there were five spots left for nine drivers to battle for. As expected, decent runs by both Dylan Duval and Ryan Luza (ninth and tenth, respectively) allowed them to easily maintain their place above the relegation line.

Zack Novak also had a decent run, finishing 14th, and that was more than enough to keep his place in the series for another season. Garrett Lowe needed to avoid a catastrophic ending, but his internet wasn’t playing nice. On only the seventh lap, Lowe dropped connection from the racing server. He returned six laps later, but the lack of cautions and retirements meant a worst-case scenario for the former playoff contender.

Garrett Manes held the last transfer spot entering the finale, only ahead of Jake Nichols by two points and Ray Alfalla by three. Alfalla had a great run, ultimately finishing 11th. That placed him 19th overall in the final standings and ahead of the relegation line.

Manes just had to finish enough positions ahead of Lowe and, at worst, finish one spot behind Nichols to advance. With an 18th place finish, Manes would be seven points ahead of Lowe. Nichols was the x-factor, but unfortunately for him, the best he could muster was a 20th place effort.

Blake Reynolds and Chris Shearburn also came into the night with a chance, but would fall short as well. Reynolds had a solid night with a 15th place finish, but he missed the cut by 15 points, which means his only path tonight was a win. Shearburn needed a miracle on top of another miracle, but his luck ran dry, finishing 36th.

Some of the veterans of the series, like Brad Davies and John Gorlinsky, will go head-to-head with some of the up-and-comers like Road To Pro Qualifying champion Donovan Strauss. Returning pros such as Cody Byus, Nickolas Shelton, Darik Bourdeau and Kollin Keister will also be looking to punch their ticket back into the big show.

The season begins at Phoenix Raceway running in place of the Coke Series on Tuesday nights. It will likely either be on the iRacing social channels or on Podium Esports. The broadcaster and the time have not been announced yet.