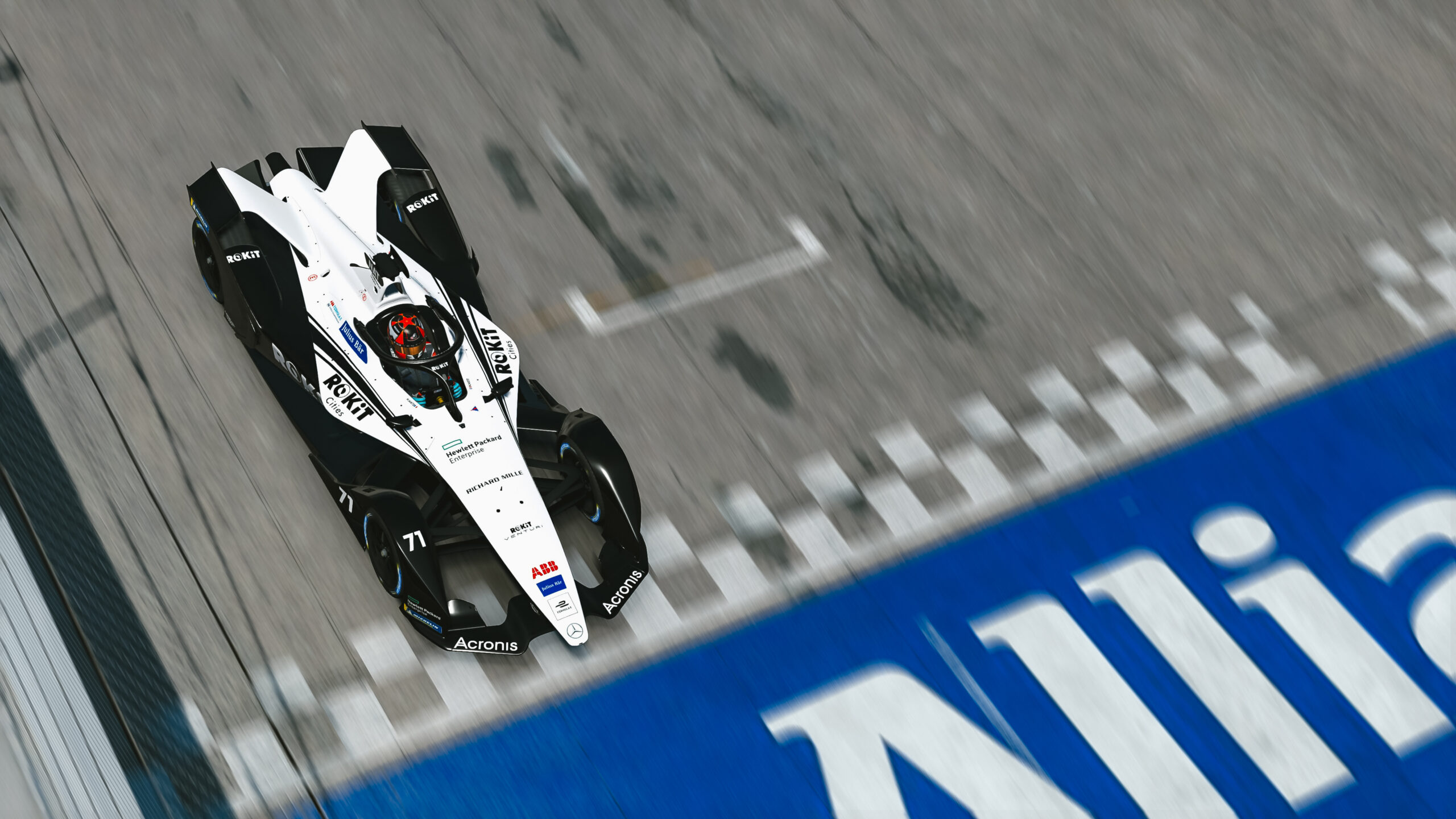 The semi-fictional setting of Electric Docks based in New Jersey, USA would host the penultimate round of one of 2021’s breakout sim racing championships – Formula E: Accelerate. If you would like to learn more of the setting to this evening’s action, be sure to check out our preview before diving into our review!

Denmark’s Frederik Rasmussen finally found himself a win last time out for his Dragon/Penske Autosport team after building form and confidence following a less than desirable first-round effort. Sadly for him, victory coincided with both of his championship rivals, Erhan Jajovski and Kevin ‘Siggy’ Rebernak, standing alongside him on the virtual podium.

Accelerate’s finale is a double points affair making this ePrix the launchpad into a week where both championship’s could be dramatically altered. Therefore, all involved in both the Drivers’ and Teams’ title fights were surely hoping for some mishaps in rehearsal to knock the confidence of their rivals before the big show.

As he managed a week ago, Rasmussen once again found himself on provisional pole at the conclusion of Group 1’s run. This time he only found himself less than a tenth ahead of Jajovski however. The biggest loser turned out to be Siggy who found himself four tenths adrift of Rasmussen and with Marius Golombeck between himself and the championship leader before any of the three other groups had ventured out.

Group 2 poured salt into the Slovenian’s wound as teammate Petar Brljak along with Jarno Opmeer, Martin Stefanko AND Graham Carroll all bumped him further down the order. By the end of qualifying, it transpired that Siggy would be starting from his lowest grid position of the season in P11. Mercifully for BMW i Andretti, Brljak’s effort was impressive with the Croatian inside the top three.

Coming up dry of points in the desert landscape of Saudi Arabia, Nikodem Wisniewski raised eyebrows claiming P4 for DS Techeetah. The Polish driver had been solid if not spectacular so far this season. Lorenz Hörzing meanwhile looked to build upon his best result of the season from last time out. A P9 for the Austrian was not to be dismissed.

Bogging down with a sluggish launch, Rasmussen found himself immediately relinquished of first place as Jajovski snatched upon mistake around the outside of the first chicane. A huge moment befell Brljak behind leading to three championship relevant takeaways before the field had been racing for twenty seconds; Jajovski led, Siggy was now ahead of his teammate and the Macedonian’s support act Hörzing had jumped ahead of both BMWs into 5th.

In the melee, Golombeck had been desperately unfortunate to be jettisoned to the back of the pack with not much to be done in response except getting back on the hunt. Aside from Hörzing, the biggest winner was Wisniewski who now discovered that a podium place was truly on the cards landing in third once all was said and done.

The fast and flowing nature of the circuit lent itself to some stunning visuals but sadly not a lot of overtaking after the first lap until the introduction of the varying Attack Mode strategies. Diriyah saw something akin to a wild west standoff where all the front runners waited until the dying minutes of the E-Prix before taking even their first boost. Here, Jajovski had already activated his second with fifteen minutes left on the clock. The Macedonian was visibly confident of keeping the pole-sitter behind him.

The busy strategy window did not favour Brljak whose evening went from bad to worse, falling down to 15th place before the closing stages. Risto Kappet meanwhile collected a spinning Peyo Peev and Olli Pahkala leading to retirement for the Estonian and another really disappointing showing after so much preseason promise.

Despite eyeing up a podium for a large chunk of the race, Jaguar’s Stefanko seemed to suffer as much as Brljak in respect to Attack Mode usage. From 4th, the Czech racer slumped to 7th though he did manage to pull off a sensational double pass on Jan von der Heyde and the languishing Kevin Siggy before his second boost period ran out.

It looked like the Slovenian would need a miracle to even score a point as, heading onto the final lap, both Manuel Biancolilla and Jakub Brzezinski also succeeded in overtaking BMW i Andretti’s star man. 11th at the line would mean Siggy’s first non-score of the season at the worst possible time. Though significantly less frustrating, Rasmussen would also encounter an issue as Wisniewski caught the Dane napping and snatched second.

All of this would be music to the ears of Erhan Jajovski who cruised home almost four seconds clear of anyone else to pick up win number three of Formula E: Accelerate. Hörzing also struck a wonderful points haul in 4th making it a fantastic day at the office for the Monegasque outfit. Late drama for Carroll at the death – hitting the wall at the final corner – would gift Siggy a solitary point in 10th.

For the first time, and at undoubtedly the best time, Erhan Jajovski sits a full race win’s worth of points ahead of his fellow title contenders. It is somewhat fortunate for both Rasmussen and Siggy that Round 6 features double points but it is hard to see the Macedonian, who has led since the first round, have such an awful event that 26 points will be overhauled.

Following his retirement, Kappet falls outside of the top ten with Wisniewski taking his place, jumping Brljak and Carroll in the process. Biancolilla also rises up the ranks to join Stefanko on 28 points. The battle for ‘best of the rest’ looks incredibly tight with 4th to 12th in the standings separated by just 10 points.

BMW i Andretti will be rueing Lorenz Hörzing’s emergence as a regular points scorer with the German-based operation falling off the top of the Teams’ table. With no All Star points to bolster their campaign this time around, it leaves ROKiT Venturi 16 points clear at the top. Hardly an insurmountable margin, but not a place they want to be in with both drivers out of form.

The Grand Final of Formula E: Accelerate’s inaugural season takes the grid to a freshly released circuit in the heart of Italy – Rome’s brand new layout! Returning to the real-life Formula E calendar after last appearing in 2019, the popular European capital, this venue’s transformation has been trialled by our very own Thomas Harrison-Lord.

You can take a look at his experience before tuning in to the event via the Traxion YouTube and Twitch channels on March 25th.