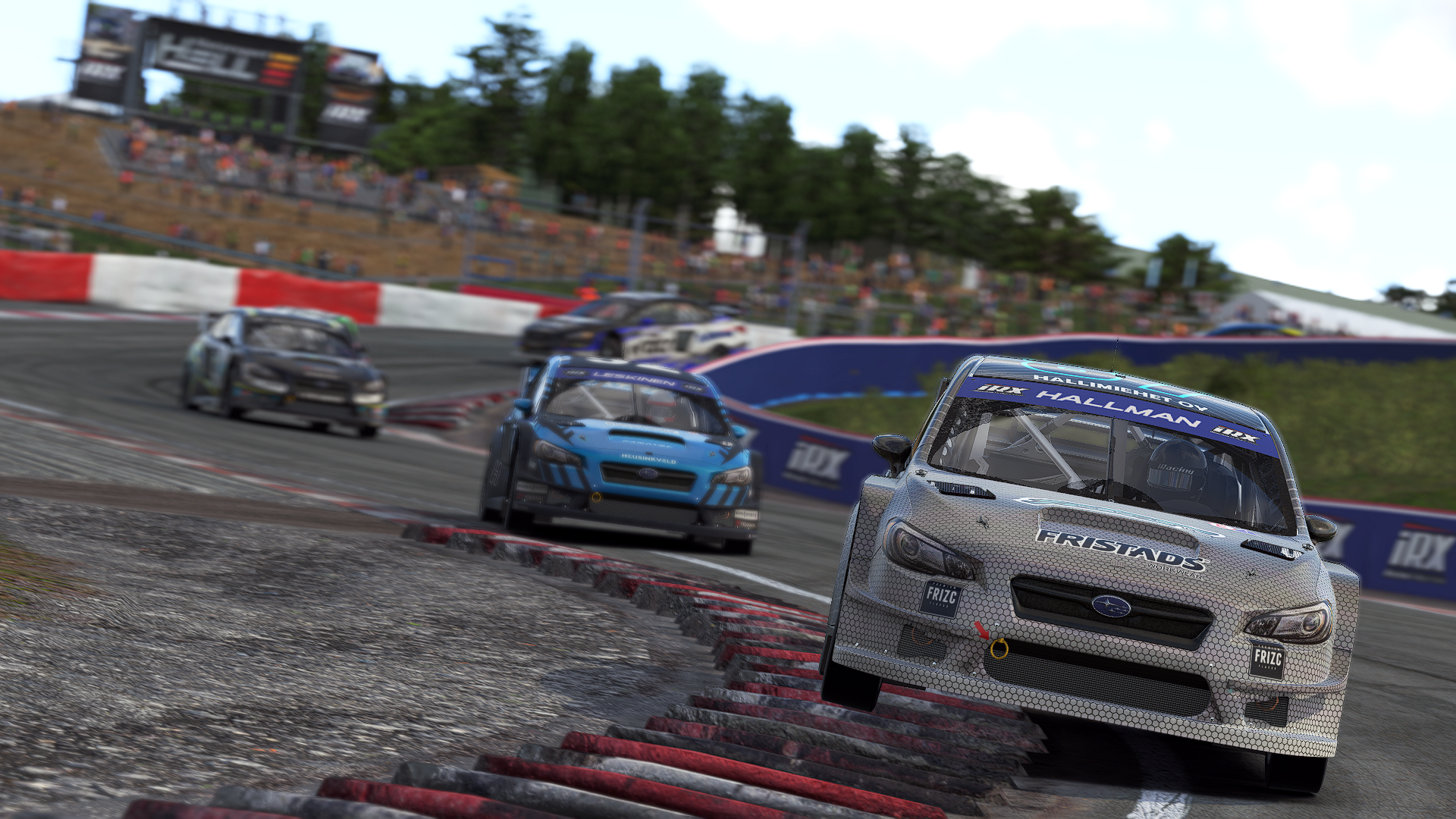 The iRacing Rallycross World Championship Presented by Yokohama all went to Hell on Wednesday night, both literally and figuratively speaking. Lånkebanen Hell Rallycross was the site of the sixth race on the 2021 season. To say there was aggressive driving leading up to the feature race would be an understatement.

Through it all, Tommi Hallman secured the victory in Hell quite easily over Jarno Leskinen and Garrett Manes. Hallman swept the event by qualifying on the pole, winning his heat and winning the feature for maximum points.

Before Hell, Jon Robertson was the qualifying master, having won four pole positions consecutively. Robertson came up short to both of the SET Esports drivers as Hallman took the pole and Jonne Ollikainen wound up second. Behind Robertson, it was Vicente Salas, Luis Núñez and Garrett Lowe, in a guest appearance, scoring the remaining qualifying points.

Off of the starting line for the first heat race of the night, Hallman and Killian Dall’olmo managed to skirt around the normal path cleanly while the majority went for the early Joker lap. It didn’t work out. The Logitech G Altus Esports duo of Núñez and Beau Albert ended up bouncing off of Kevin Ellis Jr and Louis Lejeune at the top of the corner. Ellis Jr got close to catching Dall’olmo, but he wasn’t able to in the five laps as the transfers went to Dall’olmo and Hallman.

Crazy became the theme of the rest of the heats. In the second heat, Josh Fox jumped the start so bad that he ran into Ollikainen and cost him a penalty as well. Meanwhile, Garrett Manes had managed to take full advantage of things, pulling out to an early lead. Ollikainen wound up passing Manes back for the lead and crossed the line first. Unfortunately, the jump penalty relegated him back to sixth. Manes and Jarno Leskinen advanced.

One less car, but it didn’t matter in the other two heat races. Robertson looked to have the early advantage off of the start, but self spun at about halfway. This allowed the entire field to get around him. As Thomas Wangen and Yohann Harth battled for the transfer spot, they made contact and both were eliminated right there. Nitro Circus driver Otto Taskinen and Tommi Nukarinen from Loenbro Motorsports managed to escape the chaos to advance to the feature.

The final heat was insane before the lights went out as Salas dropped connection from the server at that moment. Toni Lähteenmäki and Jake Robertson were in prime position to advance, but were collected together on the Joker lap just like the folks in the first heat were. Jakob Rafoss and Marcos Matamoros, two drivers who have a combined one feature appearance this season (Rafoss, Iowa), were able to scoot through to the main, a most unexpected Top 8 to this point.

Combined in total from the lineups of the C-Main and B-Main, seven drivers in the Top 10 in points were in danger of not qualifying for the feature race at Hell. This included both of the Top 2 in the standings, Robertson and Ollikainen.

In the C-Main, Robertson would need to hold off the likes of Ellis Jr, Harth, Albert and Núñez, all drivers with feature race appearances this season. Things, of course, got crazy and stupid with the Logitech G Altus Esports drivers taking themselves out, Harth taking himself out, and Ellis Jr choking the lead away to Robertson. The points leader was able to make it through for the ninth starting spot.

The B-Main had just as many hopefuls that knew how to get to the main event, including Ollikainen, Jake Robertson, Salas, Lähteenmäki, Luke Crouse and Fox. If Ollikainen wanted any shot to stay in the hunt for the title, he would need to qualify for the feature.

At one point, substitute driver and current eNASCAR Coca-Cola iRacing Series driver Garrett Lowe had a shot at transferring in. Lowe is a veteran in this series since its inception in 2018, having a pair of Top 10 points finishes in the first two seasons. He fell out last season, but stayed close as a possible replacement driver if need be.

Unfortunately for Lowe, an untimely slowdown would end his chances to advance, as both he and Salas, the two eNASCAR drivers in this LCQ, were sent home. Ollikainen did win easily to take the final transfer spot.

Last year, the series went to Hell twice. Once to start the season, and a second time halfway through. In the first race, Hallman wasn’t able to make the feature. He turned that around immensely in the second try, winning from the pole and taking the fastest lap in the process.

While Hallman went on to take an easy win, the stories came from second through fifth in the final results. DirtFish rookie contender Leskinen collected his first career podium finish, his best career finish with a second place effort. Manes, in his first feature appearance of the season, managed to round out the podium with a third place run.

The two points leaders curved a potential disaster day and both rounded out the Top 5. Robertson and Ollikainen were both able to pick up five spots and double digit points at the end of the day. Robertson in particular increased his points lead by three over Ollikainen.

Now, it’s definitely a three-horse race as Hallman is only 21 points out of the top spot with three races to go. Harth won’t likely have a chance after next week. He’ll need to win out and score maximum points from here on out and hope the others don’t score more than 24 points. It’s not impossible, but it is unlikely. If Harth is 58 points or more out of the lead (currently 63 behind), he won’t be able to defend his 2020 championship.

Note: This event saw the first substitution as Johannes Vahanen from Loenbro Motorsports was on vacation this week. Two other drivers that were not substituted for, Rasmus Tuominen and Alex Bergeron, were suspended this week for hitting the designated incident cap.

The iRacing Rallycross World Championship Presented by Yokohama heads to Phoenix Raceway next week. The series will utilize the legacy version of the venue, and not the brand new one due out Thursday.

Unfortunately, there was no Traxion presence in the All-Star feature this week once again, as Aero had other obligations, and well, this reporter is just slow.

The Phoenix Raceway broadcast next week will be available with multiple options for different languages. The main feed in English will go off on the iRacing Facebook, Twitch, and YouTube pages. The Finnish feed can be viewed on Finnish Sim Racing Association (FISRA) and a French version will be on BenjxMotors while a Norwegian cast can be found on the Norwegian SimRacing Channel.