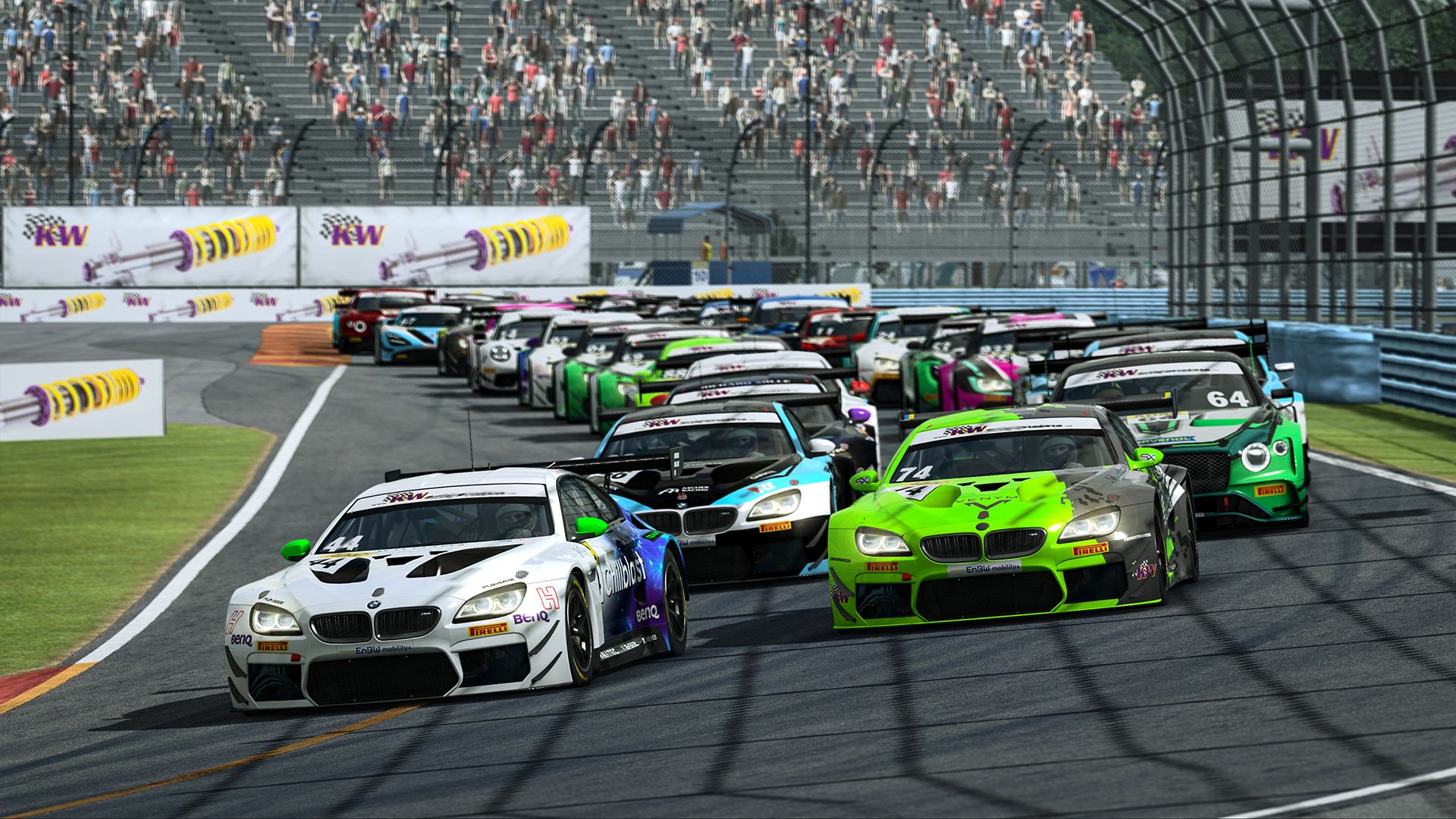 It was a day for many to remember as the ADAC GT Masters Esports Championship got back underway for the 2022 campaign. At Brands Hatch, it was dreamland for Christopher Högfeldt who stormed to double delight, continuing his excellent late-2021 form. Quite the polar opposite could be said of reigning champion Mortiz Löhner, however – the German didn’t touch the top ten all evening.

Aiding the early championship leader’s cause was the failure of anyone else hitting the podium twice. Nikodem Wisniewski and Erhan Jajovski picked up a decent haul of points but would surely be hoping that ground could be regained at Round 2.

An exciting track awaited on Tuesday evening with Watkins Glen International a first-time location for the championship.

Högfeldt would indeed remain at the sharp end of things as Sprint Qualifying came to a close, but would fail to take pole position for the first time this season. Instead, it would be Jack Keithley who found himself in the prime seat; the Brit had scored decently at his home round in an otherwise unspectacular outing.

Another driver to hit the top ten twice at Brands was Leonard Krippner and the underrated German once again showed his qualities to pick up third ahead of compatriot Max Pfeifer who had yet to score a top ten finish in 2022. For Jajovski, P5 would have to suffice.

Löhner’s stuttering start to his third consecutive title defence took another major blow as the German would line up on the final row of the grid. Wisniewski also suffered disappointment with P15 the best the Pole could extract from the session.

For the first half of the opening lap, the entire field was impressively clean in spite of the tight and twisty nature of the Glen. The calm lasted as long as Heel corner, where Pfeifer got it all wrong on the brakes and went into the back of Krippner. The second row in tatters, Jajovski and Jakub Brzezinski took advantage.

With half the race run, the same corner almost claimed its next victims as Jajovski squirmed under corner entry and almost clipped Brzezinski who slipped into the podium places.

From here on out it was a relatively quiet run to the flag. Högfeldt knew full well how important a podium would be in the long run, and conceded victory to Keithley without much fuss. Brzezinski rounded out the top three, claiming his first podium of the season.

The high odds of finding an exact replica of the front row from Sprint Qualifying were ignored in Feature Qualifying as Keithley and Högfeldt found themselves separated by 0.077 seconds once more. The second row would look quite different this time around. After a strong yet anonymous Sprint, Bence Bánki found himself third on the grid ahead of Gianmarco Fiduci.

Wisniewski looked much better securing fifth, although Jajovski was nowhere to be seen. Brzezinski would be starting down in P10 just behind Krippner who at least got a second chance to score good points after his Race 1 incident.

No lap one panic this time round as the Feature Race began with great anticipation. Of the top ten, sadly, Krippner was once again the biggest loser in the opening exchanges, losing position to both Brzezinski and Jajovski. A flurry of drivers went into the pits at their earliest convenience with just five minutes of the race run. Of the drivers attempting the undercut, Tim Jarschel was the leader.

Although the front of the pack was unfazed by these bold calls, the lack of clear overtaking opportunities was spooking some further back in the midfield. It had become an oddity to see Isaac Price heading onto pit road less than thirty minutes into an ADAC GT Masters Esports contest yet there the Brit was; responding immediately to the threat.

Not that it did him any good, it was already too late. Jarschel had gained, in theory, multiple places in one fell swoop.

With just over nineteen minutes left, two of the major players in the battle for victory made their call. Both Högfeldt and Fiduci had no doubt been informed of the recent goings on and opted for the undercut themselves. Should the championship leader’s pace have been held up by Keithley? It would not only be beneficial for himself but the Italian behind.

The man who had spearheaded every lap until this point had no alternative but to respond in kind. Much like Price before him, he lost crucial track position in being reactive rather than proactive. Ultimately, Bánki’s loss of time through stopping was negligible thanks to a battle between the front two upon pit lane exit.

With Jajovski’s stop, the final ten minutes were set up to be tense and nervy. Högfeldt’s lead was tenuous but for the track aiding him from a defensive standpoint. The duels behind were just as intense. Michael Rächl, Leon Rüdinger and Jajovski had all put together some excellent drives, just aiming to consolidate their points hauls now.

Everything ultimately remained status quo until the chequered flag. For Högfeldt, this had been an emboldening couple of races seeing his already enjoyable points lead extended. For the likes of Keithley, much work was ahead. For Löhner – who was surely disillusioned – hopes of a fourth title might be up in flames already.

For a second consecutive season, the Traxion.gg YouTube channel is the place to go for your exclusive English commentary coverage. Be sure to subscribe for all future rounds of the ADAC GT Esports Masters Championship and more! Catch Round 3 on March 15th.