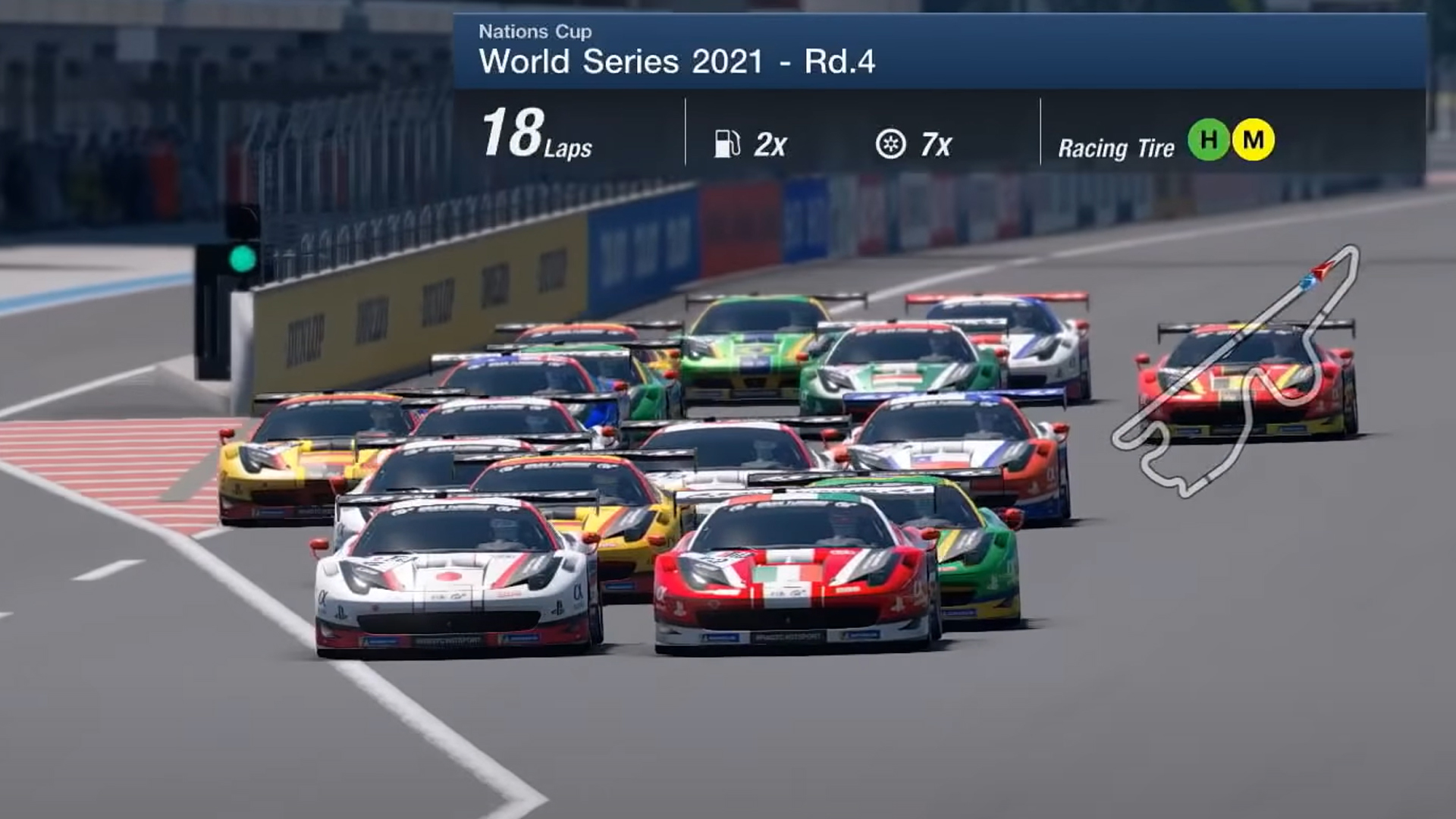 With the Gran Turismo World Championships Finals on the imminent December horizon, Sunday’s action held plenty of focus and anticipation. The fourth World Series would determine exactly who we would see competing for top honours and who would be sent back to the drawing board as Gran Turismo 7 prepares for its 2022 debut.

For the final World Series event the Manufacturers Cup returned to Germany and to the legendary Nordschleife circuit providing the biggest field spread of the year in Qualifying. Igor Fraga pulled a fantastic lap out of the bag in his Toyota to lead a Japanese outfit front row with Mazda’s Ryota Kokubun alongside. After a breakthrough race at the Red Bull Ring, Yuhki Araki was once again in podium contention for Dodge.

With none of the Nürburgring Grand Prix circuit utilised on this layout, the run into Turn 1 was extremely short and ensured status quo was held for the opening quarter of Lap 1. Indeed the first overtake of the race came through a mistake of Peugeot’s Quinten Jehoul who touched the grass on the far side of the Green Hell and spun his way to the back of the pack.

Passes were going to be at a premium out on track, although Araki was determined to buck the trend with a steely move on Kokubun down the Kesselchen to make his way into second. Fuel saving was the order of the day to minimize pitstop times and the entire field was expected to dive in at half-distance to preserve tyre advantage. To the surprise of many, this wasn’t the case..

Araki would lead half of the drivers in whilst the other five would go round once more. Kokubun would lead the early stoppers out, however, with his fuel management delivering immediate dividends to the tune of a one second gap ahead of his countryman. Jose Serrano meanwhile, at a crucial point in his alternate strategy, picked up a potentially crippling time penalty for track excursion.

The Spaniard would shockingly gain positions through his pitstop coming out ahead of Kokubun with Fraga retaining the race lead. Araki would lose out even further with Takuma Miyazono jumping the Dodge initially. Fourth would be his once again halfway round the final lap though with an evident pace advantage on warmer tyres.

Places would also be exchanged further up the road with Kokubun’s straight-line speed advantage coming in clutch against the leggy Porsche of Serrano. Neither could keep touch with an impeccable Fraga who led from start to finish and picked up the fastest lap to cherry up the cake.

From a Japanese manufacturer winning to the land of the rising sun itself, Japan’s Fuji Speedway would play host to the final Nations Cup race before the Grand Finals with Ferrari’s 458 Italia GT3 the car of choice. Hot favourite for the title Valerio Gallo would claim pole position by the slimmest of margins from home hero Takuma Miyazono. Victor earlier in the evening, Fraga lined up in the third position.

A thrilling launch saw Miyazono challenge for the lead instantly before slight contact allowed Gallo to hold firm. Behind, Serrano was gunning for his second podium of the day passing Fraga into Turn 1. The near 1.5-kilometer pit straight would prove a difficult handicap to those on the defence evidenced at the beginning of Lap 2 as Miyazono finally swept past into first.

Gallo’s strategy from this point was clear as despite a clear slipstream benefit he would choose not to make the pass on the reigning Nations Cup and Manufacturers Series champion for a couple of laps. Nevertheless, he would inherit the race lead after a bizarre moment for Miyzono, as his tyres spun up on the outside kerb of Coca-Cola to send the Japanese star into the barriers. He would return to the road seventh with a wry smile.

This second stint of Gallo leading was once again brief as Serrano swept by on Lap 7. The pitstop phase would come and go across Lap 9 to Lap 11 and the front three would retain position despite a creative pitlane entry and exit path for third-placed Fraga. An initial threat from the undercutting Kanata Kawakami and Tomoaki Yamanak soon dissipated as the pair engaged in a battle between themselves.

After half the race sat behind Serrano, Gallo would strike on Lap 16 to grab the lead back. His strategy would be complicated by a re-energised Fraga and Yamanaka who chased an unlikely win by lying in wait behind the hounding Spaniard. Despite all the odds, Gallo would reign supreme once again – netting a third Nations Cup winners’ trophy out of four available.