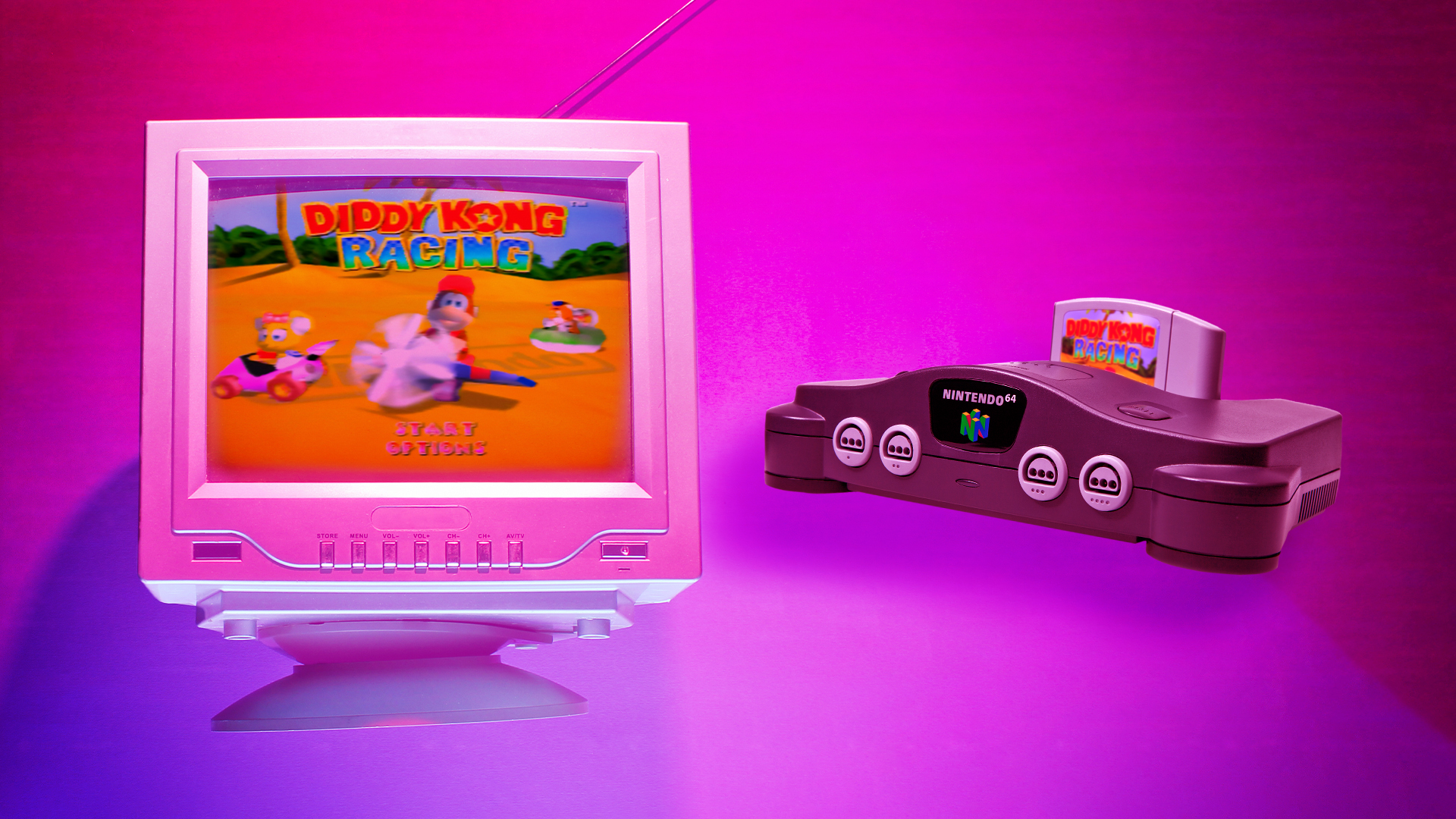 25 years after its launch, and with the Switch Online Expansion Pass offering up N64 games, does Diddy Kong Racing deserve a re-release?

I am of the unpopular opinion that Diddy Kong himself is actually alright. I mean, he raps monkey noises with a ghetto blaster, baseball cap and shades. But even so, he wasn’t my hero.

I didn’t own an N64 while it was current, had completely forgotten the DS version that I’m reasonably sure I played, and the one time I owned this game on a real N64 was about 20 years ago and I sold that cartridge almost immediately.

It seemed childish and slow compared to PlayStation 2 games and it wasn’t for me. But you know what? ’90s racing game design was frequently amazing, and this is a game by the legendary Rare at the peak of its powers.

With the potential for this game to come to Switch’s Online Membership N64 collection, I bought it again off eBay and gave Diddy a spin with 2022’s eyes.

Sadly, 2022’s eyes do not look kindly on real N64 hardware. Very un-coolly, I only have a composite N64 cable, and playing an already hardware-blurred, standard-def game through that, upscaled via an unbranded HDMI upscaler to 720p and then further to fill a 55-inch 4K screen, it’s fair to say it doesn’t look very good.

It would also be fair to scream “MY EYES OH GOD MY PRECIOUS EYES”, but instead let’s examine what it does well. For starters, unlike Mario Kart 64, it’s got fully 3D characters in their karts, and they look good. The Gouraud shading remains exquisite, and 3D waves rise and fall across the surface of the water, echoing the physics and palette of Wave Race 64.

Indeed, the colours here are magnificent, and even though the effects are primitive (primate-ive?), it has a great many pleasing moments, like the glowing chalet windows throwing yellow squares onto the snow, the ‘too expensive to only use once’ green dinosaur stomping around the valley, and some lovely, solid, open tracks to drift through.

Perhaps as an indication of what to expect on Switch – if it ever makes the jump – I was capturing footage for screenshots on an Atomos Ninja V monitor, and the screen on that is of comparable quality to the OLED Switch. And you know what? The game looks great on it!

The small screen even makes the flicker-book frame rate of some levels more bearable. If it got any kind of visual upgrades like HD support or a locked 30fps frame rate, it would probably look perfectly passable on Switch. And for a 3D game that’s some 25 years old this year, that’s really saying something.

It’s a similarly mixed bag in the audio department. The almost-fully-voiced characters are a bit muffled, but given the memory constraints of the cartridge, they’re surprisingly convincing.

Less convincing is the music. It’s probably sacrilege to suggest a David Wise soundtrack isn’t actually all that great, but it’s rather repetitive and I found it got annoying, especially when races needed to be tried over and over, for instance when trying to collect the eight silver coins and still finish first.

But again, there are some vocal samples in the music, which was pretty progressive for the time. And of course, it gets bonus marks for Diddy’s monkey noises.

However, the game still comes across as extremely childish. The character select screen is an abomination of furry faces bobbing to twee music. Conker’s in there, which adds some much-needed satire if you keep his Bad Fur Day character in mind, but otherwise, it’s pretty hard to stomach. But thankfully all that is forgotten as you hit the track, where things get far more serious.

The game really shows its AAA quality when you get used to its systems. With such primitive technology, the game can’t run at blazing speeds, draw vast open spaces or even render fully 3D environments, resorting to pre-rendered spritework for some details.

But what there is has been finely crafted with obvious love and attention. 2D trees drop snow when you hit them, planes can brush the ground on boost pads and grant you the boost, and races have been made just about possible to win if you have the skill.

It’s properly curated, which so many modern games can’t even begin to replicate because there’s just too much content to test everything and balance it on a knife-edge.

The three-vehicle variety of gameplay works well (though the hovercraft should arguably have been replaced with speedboats or jet skis), with the planes in particular feeling tremendous on the N64’s longer-than-usual analogue stick.

The weapons system is underplayed, though you do need to use it to win the silver coin races. Unlike Mario Kart – even contemporaneous Mario Kart – there’s no obvious balancing of item distribution, so if you’re at the back, you probably won’t catch up to everyone else before the end of the race.

It really is a racing game, which actually adds to its appeal as you rarely feel that you’ve won or lost cheaply. Every victory is truly earned in Diddy Kong Racing.

While four-player split-screen is an option, I only had enough pads to test the game in two-player split screen (thank you, Retro Gamer magazine subscription!) and I must say it holds up remarkably well.

In fact, perhaps due to the blurriness of everything, I couldn’t see any obvious concessions in the split-screen mode. It looks and plays like single-player, perhaps with a slightly lower frame-rate than usual.

It’s odd, however, to feel like this kart racer is intended to be a single-player experience. Indeed, you have to play through the solo mode to unlock tracks for multiplayer, and the delicate balancing of all its systems makes it feel like it was meant to keep one player occupied for a very long time.

You could argue that the game is artificially elongated, partly with its high difficulty level but also its re-use of tracks, first with the coin collecting race on the circuits you just cleared, then another series to win the trophy. Oh, and again to find the secret key. There’s also a sort of boss race in each area, which has to be beaten twice to fully complete an area.

Besides that, there are even some races around the hub world, truly squeezing every last drop out of the game’s assets. Still, there are loads of well-designed tracks which can be played in Time Trial too. It’s a full-featured offering, demonstrating the game’s Triple-A credentials.

Like I say, I was never a Nintendo fan as a child, but even I can see games running on actual N64 hardware have something special about them. Something magical. Something in the way the processor seems to linger on every frame like Santa choosing presents, filling the scene with quality before displaying it and setting to work on the next one.

It’s slow, clunky, and yet glorious and satisfying. It’s also worth noting that N64 games usually look absolutely terrible when cleaned up during emulation, but this one would undoubtedly benefit from being crisper and cleaner.

So I say go for it, bring it to Switch Online. Or just make a sequel. A 25th-anniversary comeback would be so cool either way. Diddy do it. Yes.

For more of the best N64 racing games, we have a compilation of titles we’d like to see on Switch Online Expansion’s Pass plus Mario Kart 64 and F-Zero X retrospectives.