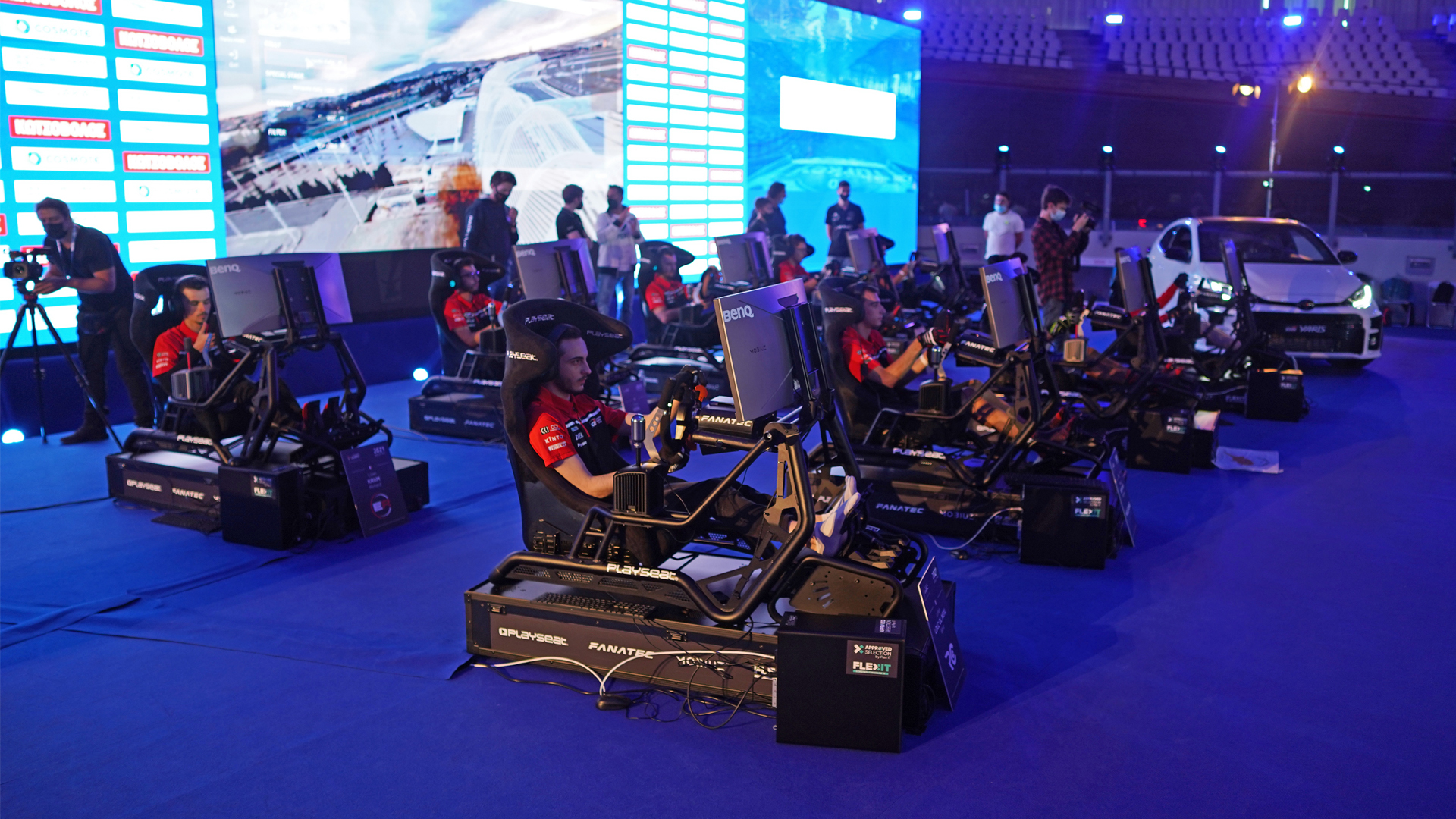 On the weekend the Acropolis Rally returned to the World Rally Championship after an eight-year hiatus, it wasn’t the only competitive rally event in town.

Held inside the Olympic Velodrome in the suburbs of Athens was the 2021 Grand Final of the Esports WRC, and the competition was no less fierce than Sébastien Ogier vs Evans, Neuville or Tanak.

Over 15,000 competitors across PC, PlayStation and Xbox were whittled down over the course of 13 qualifying stages until the best nine drivers in the world arrived in Greece for a day-long showdown.

The competition uses the recently released officially-licenced WRC 10 game, created by KT Racing, and all competitors used a specially designed sim rig with identical specifications. The drivers are even given unique WRC socks that are designed to provide additional grip on the pedals.

The goal is to win the Grand Final and become a virtual world champion.

It’s a full-blown production, with the event broadcast live on WRC.com’s All Live service, YouTube channel and Facebook page, featuring live commentary from Becs Williams, Ben Constanduros on presenting duties and a dedicated production team, all hurriedly adjusting lighting, mics and an imbroglio of cabling.

As esports has matured, over the past two years especially, it’s not uncommon to see professionally run events, but the WRC was among the first to take virtual racing so seriously.

“We started with the WRC esports back with WRC 5 [in 2016] and I created part of the format. Back then we were trying to see if WRC could actually be played in an esports environment,” explained co-commentator René Buttler.

“We had to build it all from scratch. We’d never seen rallying in esports before until the WRC went for it. Now we’re in this incredible Greek venue and things have moved on.”

The rapid development was highlighted by the multiple WRC esports champion, Lohan Blanc, aka Nexl.

“The two first years I played with a gamepad, and become champion in 2017. Then I switched to a steering wheel because the organises wanted [the event] to be more professional. After that, I won in 2019 again, so I have won with both,” said the winner of the 2021 event.

“It’s always improving each year. It’s really impressive the job they did on each game and cool to witness [the evolution].”

The virtual championship, along with the accompanying FIA Rally Star programme, are something that the WRC sees as essential tools to attract a new, more youthful audience. The hands-on nature of esports creates a level of interactivity above and beyond written or broadcast media.

“If you look at some many young people’s discovery of the WRC, it has come from esports or the WRC games before we had esports,” highlighted Jared Grellet, Communications Manager at WRC Promoter.

“Now that we’ve got simulators, what they are able to do on these machines, it’s not too far away what they are doing in the real cars and we know this. Look at [current Toyota Gazoo Racing WRT] Takamoto Katsuta who has some of the fastest times in the world on the WRC game’s Japanese stages. So [the WRC drivers] do see value in terms of helping them on the real stages.”

WRC game creator KT Racing has been making the official WRC game now for over six years. Since its first effort in 2015, the game series has experienced rapid progression, with the variety of playable stages a particular strong suit.

With 2020’s WRC 9, however, the driving physics took a giant leap forward, bringing players closer to the action than ever before. This is something that has been built upon again with the latest title in the franchise, that released earlier this month.

“This year we tested the game with Sébastien Loeb and he gave us feedback about the game. He told us he gets the right sensations when he is driving and a feeling close to what he gets in the [real] car.

“In WRC 9 we already got good feedback from players, but for WRC 10 we also got positive feedback from a nine-time WRC champion – a big achievement. We think that we are now at the top level in terms of simulation.”

The release timing of the new title was a source of trepidation for the nine esports WRC finalists, as they only had a few weeks to get to grips with the brand-new stages and tyre model that in some instances, dramatically changes driving style and strategy.

“WRC 10 is a new game, sadly I haven’t been able to practice a lot because in Lebanon we have 14 hours of electricity cuts each day. But, in the end, I’ll get by and do my best,” explained the Lebanese teenage sensation.

John Bebnowicz-Harris, aka Izamusing, made it through in fourth after suffering all day with a bout of suspected food poising. He was visibly emotional when the semi-final results were revealed.

“Coming into this event, my pace is a bit unknown, because I [don’t think] I’ve had as much time on WRC 10 as the others, but I will give it my best. I always stay optimistic and I’m going to push as hard as I can.”

Joining him in the Grand Final were the other three favourites heading into the event, previous champions Sami-Joe and Nexl, plus Dylan Noel.

“I’d like to aim for first [position]. My main goal was to score a podium once in my career in a world championship, but now this is done,” said the third-place finisher in the 2020 competition.

“So, I’m here and well prepared, more prepared than any other world final I have competed in,” explained the avid Gilles Panizzi fan.

In the end, the final showdown didn’t disappoint. Four stages, a mixture of gravel and asphalt, all new to WRC 10 across Estonia, Greece, Greece and Croatia.

After three stages, the stage times were very close, Nexl winning the opening two stages with Sami-Joe close behind despite a roll and penalty during the Acropolis-based section. He fought back in the following sealed-surface Spanish stage, over four seconds quicker than his nearest rival.

This set up a close final stage, that featured dynamic weather conditions – starting dry before the precipitation started to fall.

The field was split on tyre choice. Izamusing and Sami-Joe went for wet rubber, whereas the two Race Clutch teammates selected slick tyres after a late decision from Noel. During the initial going, those on grooved tyres were struggling, and as the rain came down in the second half, the gap to the leaders did not fall quickly enough.

“I was on the slick tyres and most of the final stage was in the rain, so it was difficult, but we managed with the team to get the right strategy and it worked really well, so I’m happy,” said the ecstatic, but humble, victor.

The raw emotion on display from all competitors through the day showed just how much it means to up-and-coming talent.

They are competing in an official WRC event, for a large prize, during a real-life WRC weekend and to a live broadcast. For the WRC’s part, putting such an emphasis behind the virtual racing scene shows a genuine understanding of today’s youth, without the sometimes condescending views of other existing motorsport series.

You’d be forgiven for thinking that over the past six years there have only been two outright WRC winners: Ott Tanak and Sebastien Ogier. But to me, there’s been six because Niklas Krellenberg, Jon Armstrong, Abi Nakhle and Lohan Blanc are just as worthy champions.