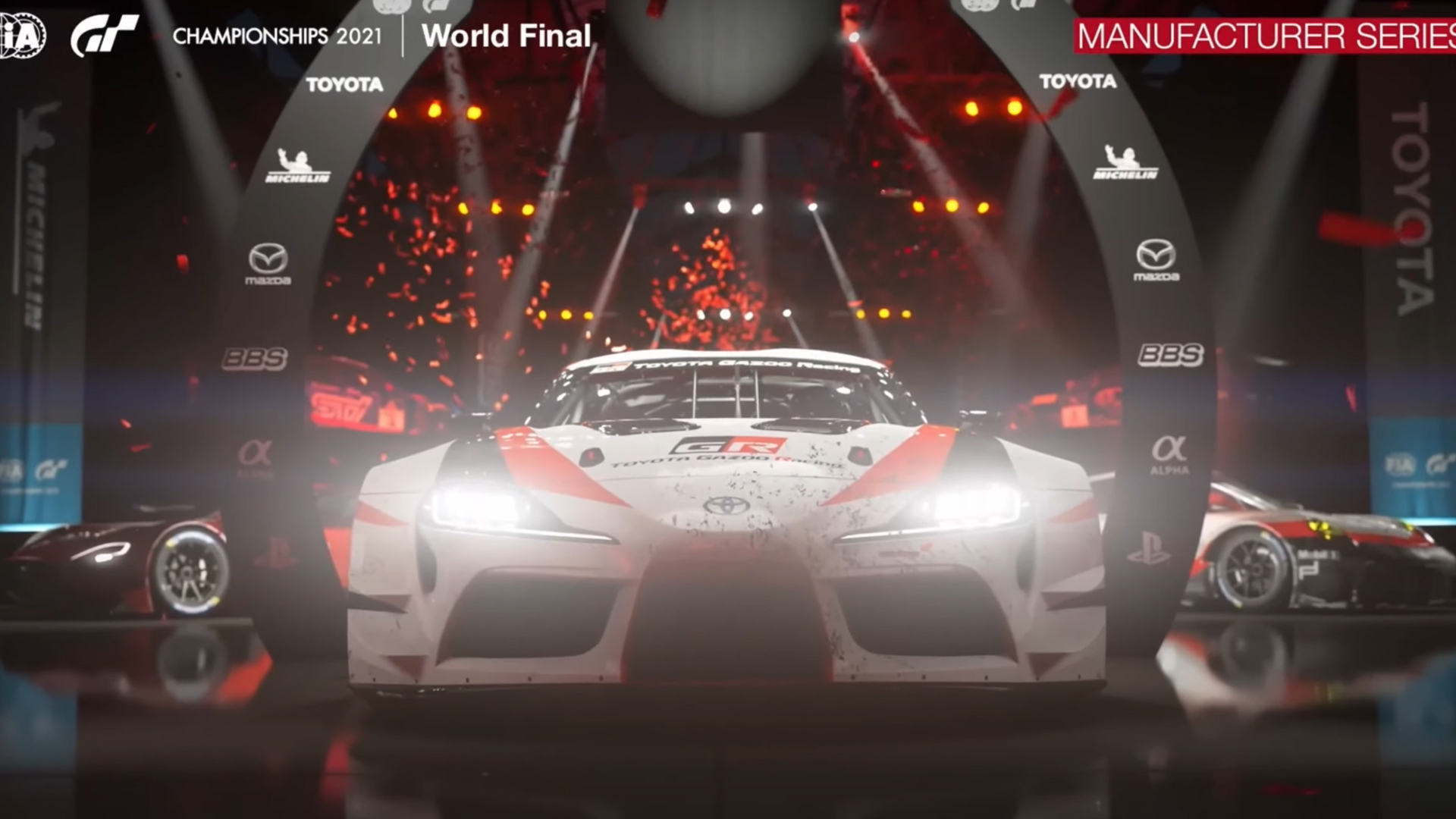 Onto the main course. After Friday’s Toyotafest, the FIA Gran Turismo Manufacturer Series World Finals had a lot to live up to. At the end of three races, with the final contest featuring double points, three drivers would reign supreme as winners for their chosen outfit.

Points from the World Series carried over into the World Finals and thus any disadvantaged team would require a monumental shift in fortunes to overhaul the established deficit.

The Autodrome Lago Maggiore played host to the first battle for 12 points with López establishing Toyota’s intentions straight out of the gate with pole position in his GR Supra. No drama unfolded as proceedings got underway with the Spaniard and his Porsche-branded compatriot Jose Serrano breaking away from the pack.

Shota Sato led four cars at the end of Lap 3 towards their mandatory pitstop, the Nissan hoping to undercut those ahead in the battle for fourth. Everyone bar Serrano and third-placed João Pessôa responded immediately but the damage had been well dealt.

Upon the final pit stops, Sato was confirmed to be in third with Pessôa, in particular, losing out hugely with a fall down to sixth. The Brazilian had work to do and passed Ryo Kumata’s BMW through Turns 1 and 2 the following lap. The next move would be a stunning cut back through the penultimate corner on a helpless Hiroshi Okumoto albeit on Lap 9.

Time was always against the Honda pilot, however, and the podium would remain as it was. López laid down the Toyota benchmark from Serrano who helped Porsche leap up the standings. As did Sato, impressive for Nissan.

Tokyo Expressway was up next as drivers swapped out and a new tyre compound was introduced. Yamanaka would lead from pole thanks to the race result at Lake Maggiore; the only driver to start on soft compound tyres. Other big hitters such as Andrew Brooks and Luca Bonelli started on the cusp of the top ten.

The straight-line speed of the Nissan was there for everyone to see as Ethan Lim sent one up the inside of Turn 1 on Tatsuya Sugawara; the Porsche forced to concede. It wasn’t half as optimistic as what Thomas Labouteley attempted down the other side of the track, as poor Sugawara was punted down to fourth. The Honda of Shohei Sugimori capitlised.

As the Frenchman pitted and received a penalty for his troubles, the pain train continued for the Porsche with Jeff Gallan the next to demote him. The Canadian seemingly had a turbo boost in his Mazda, flying by two-thirds of the podium to grab second. Some relief came Sugawara’s way as Lim and Sugimori came into contact through Turn 1 and allowed the Japanese driver through.

By the fourth lap, everybody had pitted barring Yamanaka. Brooks and Bonelli had both pitted early and were now being rewarded. Duelling with Sugawara and Gallan, the Canadian-driven Jaguar flew to lead the quartet into Turn 1 on Lap 5. The high-speed chess game continued the following two tours with multiple position changes.

Lap 8 saw the pivotal question answered as Yamanaka made his way onto pitroad. On exit, his lead was slashed down to just 1.5 seconds. Yet, it seemed to be enough since behind Gallan was holding second for dear life as his three rivals went three-wide into the final lap’s first corner.

It was two for Toyota and another major victory in Yamanaka’s World Championships run. Gallan meanwhile would be pipped on the line by an outstanding Bonelli who gave Mercedes-Benz something to celebrate.

Heading into the final race at the Nürburgring Nordschleife, Toyota led by 12 points ahead of Mazda. Only they and the in-form Porsche squad could mathematically overhaul the superteam. The hard-compound tyre was added to the mix with now two pit stops required over the five-lap distance.

The front four started on soft rubber and Mazda’s final driver, Ryobu Kokubun, knew he had to make the early stages count. He immediately passed the Mercedes of Baptiste Beauvois into the Yokohama-S. Angel Inostroza meanwhile was starting on the hard tyre and didn’t put up too much fuss against the lone medium compound runner Kévin Belic.

Unfortunately for both potential giant slayers, they had esteemed company. Kokubun was receiving a stern challenge from Beauvois whilst Inostroza was falling well back on pace behind Valerio Gallo, Roberto Sternberg and outgoing Subaru champion Takuma Miyazono.

Despite some truly thrilling final lap, midfield dogfighting, the title battle was ultimately a bit of a non-event as Fraga left town and took all the points with him. He and Toyota truly dominated this event in style to become the first Manufacturer to win the championship twice.