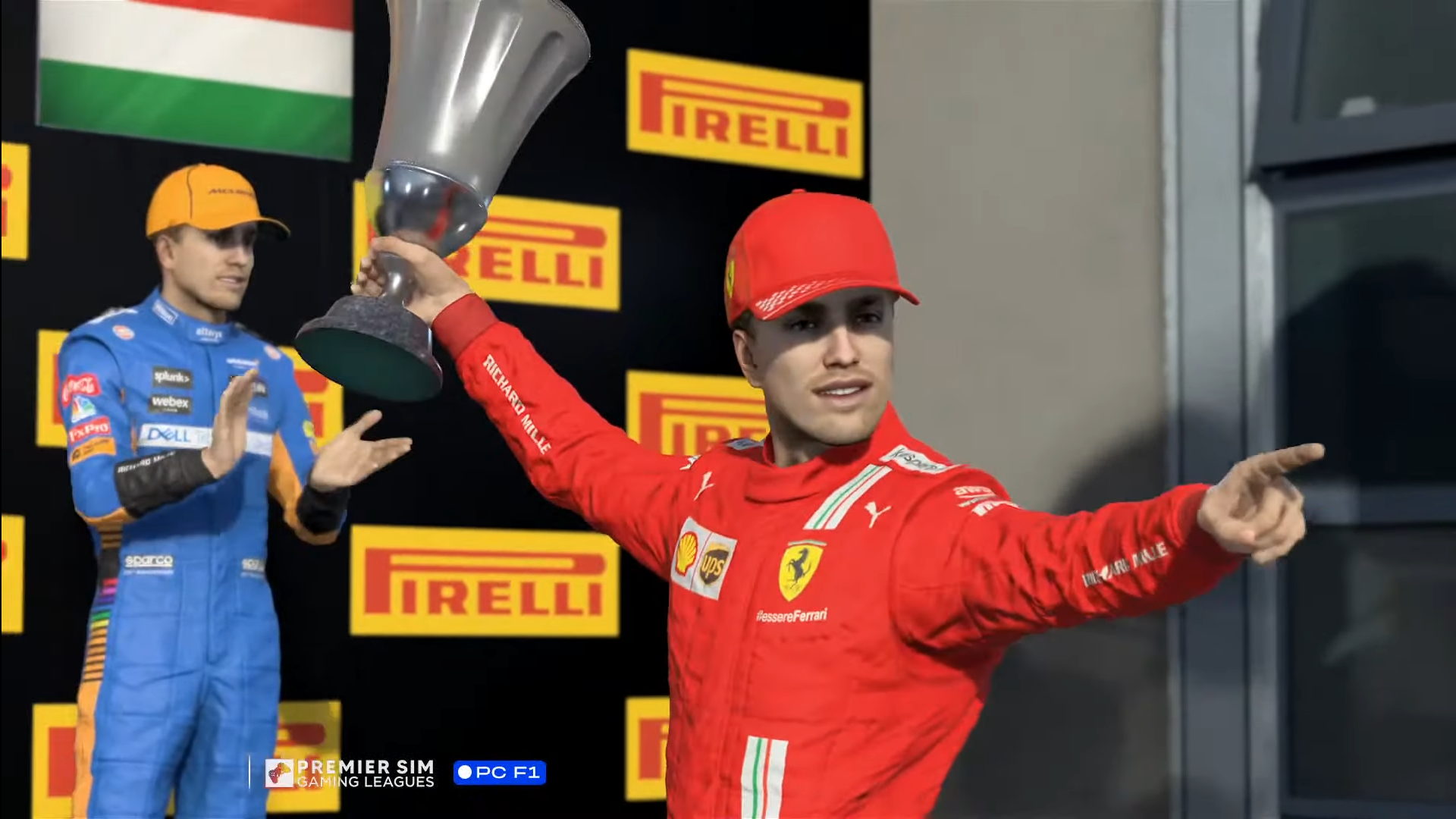 Brendon Leigh’s impressive recent form continued at the penultimate round of Premier Sim Gaming Leagues, with a second win from pole position in the last four races. The two-time F1 Esports champion held off challenges from Jack West, Jake Benham, and a PSGL F1 debutant to give Ferrari victory at one of their home races.

After being crowned champion last week, Jarno Opmeer decided not to race for the final two rounds to allow others to impress amongst the flock of F1 Esports talent. In a similar story to George Russell at Sakhir in 2020, Alfie Butcher emerged to impress on his first outing on PC, which will catch the attention of many F1 Esports teams.

The Englishman made a big impression in World Online Racing’s Xbox league over the past 10 months.

Butcher was regularly fighting at the front against Veloce’s Thomas Ronhaar and the F1 Esports Challengers Champion on Xbox, Tom Manley, in WOR’s first season on F1 2021.

During the second season, Butcher established himself as a champion challenger against Manley after Ronhaar’s switch to PC, with the two colliding on a few occasions. His championship charge dwindled after multiple wheel failures, accelerating his move to PC.

Butcher looked the favourite to take pole after finishing second in Q1 behind his teammate Benham, but only using one set of tyres and topping Q2 by over a tenth of a second. In fact, his time in Q2 would have been enough for pole position.

Ronhaar and last week’s race winner, Dani Bereznay, were the big hitters out in Q2 and were hoping the alternate strategy would pay off.

He set the pace during the first runs in Q3 but invalidated his final effort at the last corner and started seventh. Leigh set the first competitive time, but no-one could beat it: despite many getting agonizingly close.

F2’s West lined up alongside the two-time champion on the front row, with Donoso third and Ruben Pedreno fourth. Benham and Daniele Haddad completed the top six and were within a tenth of Leigh’s pole time, setting up a fascinating race at Imola.

Leigh and West got off the line well and avoided the carnage occurring behind. Donoso and Pedreno were side-by-side into Tamburello chicane and compromised themselves, giving Benham a chance to strike into Turn 3.

The Veloce driver tried an optimistic move, but three into one did not work. Pedreno spun into the wall and out of the race, Donoso picked up damage, and Benham somehow maintained control of the car in the gravel and was up two places into third.

West and Leigh exchanged overtakes for the race lead, but all eyes were on the battle for fourth. Haddad and Butcher moved into the top five due to the incident on Lap 1, and the debutant was all over the back of Williams’ new signing.

Butcher made an audacious move into Tosa on the Italian as the pack bunched up ahead and completed the overtake into the Piratella, making it a Mercedes 3-4.

The order remained the same until West and Georges Nader, a fellow PSGL PC F1 debutant, triggered the undercut on Lap 9. Leigh and Butcher followed the pair in on Lap 10, but during the Mercedes driver’s out-lap, he picked up a 3-second penalty for track limits.

The undercut did work, and it moved Butcher into the podium places ahead of his teammate, dropping Benham to fourth.

Ronhaar led the race after the red-walled soft runners had boxed, with Luke Smith and Dani Bereznay behind the Dutchman at the midway point. The alternate strategy runners started to filter into the pit lane between Lap 19 and 22 as they looked to close in on the medium drivers ahead.

Ronhaar, unfortunately, picked up a five-second penalty for speeding in the pit lane to go with his three-seconds for track limits, so Smith led the charge for a potential race win.

The Race Clutch academy driver made a brilliant overtake on Wilson Hughes up the inside of Rivazza and into seventh place.

Ahead, Butcher tried to make the overtake on West for second place. They went side-by-side through the first three corners, but Butcher was pinched on the inside of Turn 3, allowing Benham to strike, and he did so with a stunning overtake around the outside of the first part of the Villeneuve chicane.

Smith and Ronhaar dispatched Haddad and Nader in successive laps, but the former picked up his first 3-second penalty of the race for track limits.

Onto the penultimate lap of the race, Benham used the battery he had saved behind his teammate and launched an attack on West. Benham broke too late into the first part of the Tamburello chicane, went over the yellow sausage kerbs at Turn 2. This resulted in an understeer into West, causing mass carnage behind.

Benham, Nader, Smith, and Haddad were caught up in the incident and were out of contention for high-end points.

Leigh’s experience paid off as he held on for a brilliant win after controlling the race since he retook the net lead on Lap 15. West held on to take his first-ever podium in PSGL’s top split, and Dani Bereznay recovered to take the third after Butcher’s penalty dropped him to fourth.

Leigh is now level on points with Shanaka Clay but moves into fifth, having won two races compared to Clay’s one win at Silverstone. Bereznay jumps ahead of Benham into third place in the Drivers’ Standings after his podium and the Englishman’s second finish in a row outside of the points.

Whilst the championships are already decided ahead of the final round at Bahrain next week, there is still plenty of pride and momentum to gain ahead of the release of F1 22 late next month. Make sure to tune into the finale of PSGL next Wednesday at 7pm!