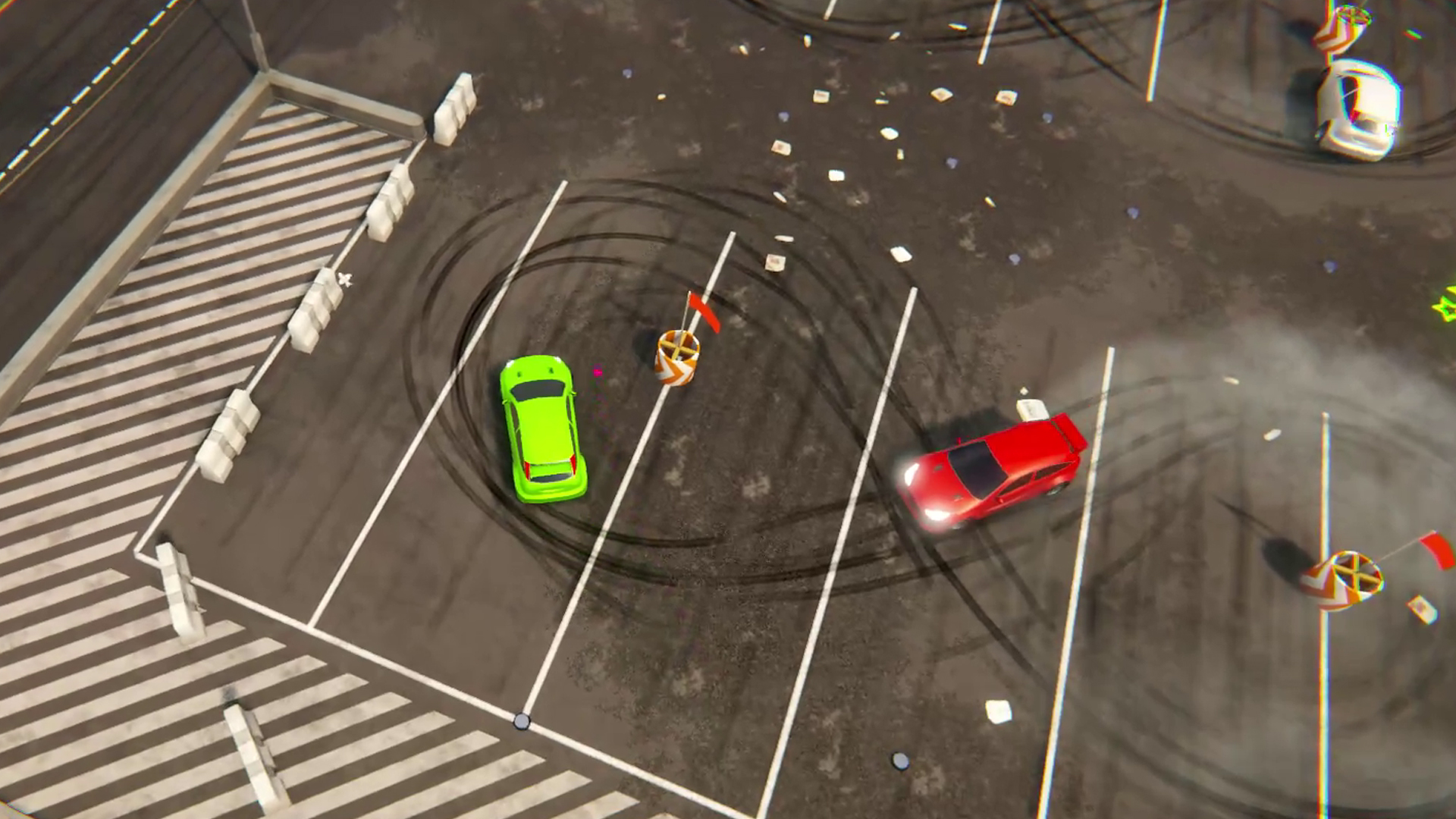 Inspired by Ken Block’s Gymkhana videos, Power Of Slide is the latest game to PC release to tackle drifting and stunt driving. Dozens of challenges are laid out before you to slide, spin, launch and smash your way through. Is it worth sinking hours into though? Let’s take a deep dive inside.

The first thing you’ll notice is that Power Of Slide is set out very similarly to the excellent Absolute Drift from Funselektor Labs. Both games drop you into playground areas that you can drive around freely, sliding and drifting to your heart’s content.

The big difference is that this game opts for a far more realistic setting and car. You’ll spend most of the game in car parks, warehouses, gardens and the occasional race track – but don’t expect to race. Instead, you’ll be looking for challenge markers to set off individual challenges.

The event variety is Power Of Slide’s highlight. You’ll have basic gymkhana events that ask you to follow a dotted line around and over obstacles. Whether it’s donuts around lamp posts or jumping off warehouse roofs, each route will snake around the environment like a complex string of spaghetti.

Some will be time-based, others trick score based and the faster and harder you drift, the more you score. Then you’ll have events with targets to follow, or bollards to smash. These appear around your car with pink dots acting like a radar for you to find and smash.

What sets Power Of Slide apart are the weirder challenges. An early one asks you to ring coloured bells, requiring a precise slalom. Parking challenges are just as hard here as parallel parking is for me in real life. Don’t judge me but I’ve panicked and reversed into someone’s front garden once and I’ve clobbered plenty of parked cars in this game trying to speed park and failing miserably.

Some see you letting off fireworks, while another has you doing wipEout styled balance challenges. There’s one where you have to smash up RC cars on the run. It’s this assortment that keeps the game fresh as you collect stars per challenge. Each has three, one usually for basic completion and two others for stretch goals. Once you’ve collected enough stars, the next area unlocks. Drive up to the beacon that guards the exit, deposit all the points your driving has racked up over time and when the meter is full, you can progress.

One rather annoying oversight is that the game starts challenges with you facing any direction, so you have a high chance of facing the wrong way. A quick cancel lets you drive back and orientate yourself the right way, but it’s a quality of life feature I’d welcome. To combat this you can toggle a manual respawn location point but I found this would occasionally bug out and drop me in the water or smash me into a building and I’d have to restart the game.

That minor niggle aside – so far, so good. There’s one rather large problem though. The car handles like a lethargic bar of soap. It is one of the most acquired tastes in driving games I’ve played in recent memory and I’m not entirely sure that’s a compliment. Allow me to explain…

Your car has a drift mode that you can turn on and off with a button. This displays a handy drift meter at the bottom of the screen that lets you know how heavy your car is sliding to one side. I found that drifting only seemed to work as a slide when you were driving at high speed.

The car has inherent understeer, but sometimes you are able to wrestle it around wide bends and hang on for dear life. I can count on my hands the number of times that comes up in the game after several hours of play. All the challenges revolve around the tightest of turns and the car simply cannot cope with it. I had to skip all the challenges that involve performing a 360 spin inside a box because, after 20 minutes of trying, I couldn’t do it.

This issue seeps into stunt design too. It’s easier to not drift and just carefully drive around the courses instead because at slow speed, drifts understeer so wildly the tracker of your dotted line thinks you’ve driven off somewhere else and stops, waiting for you to rejoin.

As the game progresses, the need for precision is paramount and so it’s less ‘Power Of Slide’, more ‘Power-Of-Not-So-Wide’ as you slalom inside buildings and between exploding barrels. That’s fine, but it doesn’t feel like the game I thought I was playing and the mismatch becomes more obvious the further into the title you progress.

It just isn’t enjoyable pootling around at a snail’s pace because otherwise the car skids off to the side. How are you able to score drift points and stay on track? You can’t – the game is at odds with itself.

After the first three hours of playing, I thought it might just be me. I am known for running a sim racing team called BackMarker Brigade, so I’m known for being a bit rubbish. It was then I realised that the online leaderboards attached to every challenge appeared to reflect my issues too. Almost every single player has abandoned certain challenges in the game because they seem impossible to complete – most notably ones with 360 spin areas in them.

I worry when I’m number 1 on the world leaderboard, and I am for most of Power Of Slide’s challenges from Area 2 onwards. That implies others may be finding the disconnect between challenge layout and car physics too daunting or frustrating to continue with. Where less than four players have completed missions, no one has got more than one star in the vast majority of them either, suggesting a rebalance may be required for the targets too.

Perhaps over time, this issue can be fine-tuned and I really hope it does. There is a lot of love put into the game and a variety of challenges to get stuck into. It just feels like the barrier to entry to actually enjoy the experience needs to be addressed so I can be toppled from those online leaderboard glories I frankly do not deserve. There is a good game in here somewhere, let’s hope it’s unearthed in time.

Full disclosure: A code for the game was provided by the publisher for review purposes.