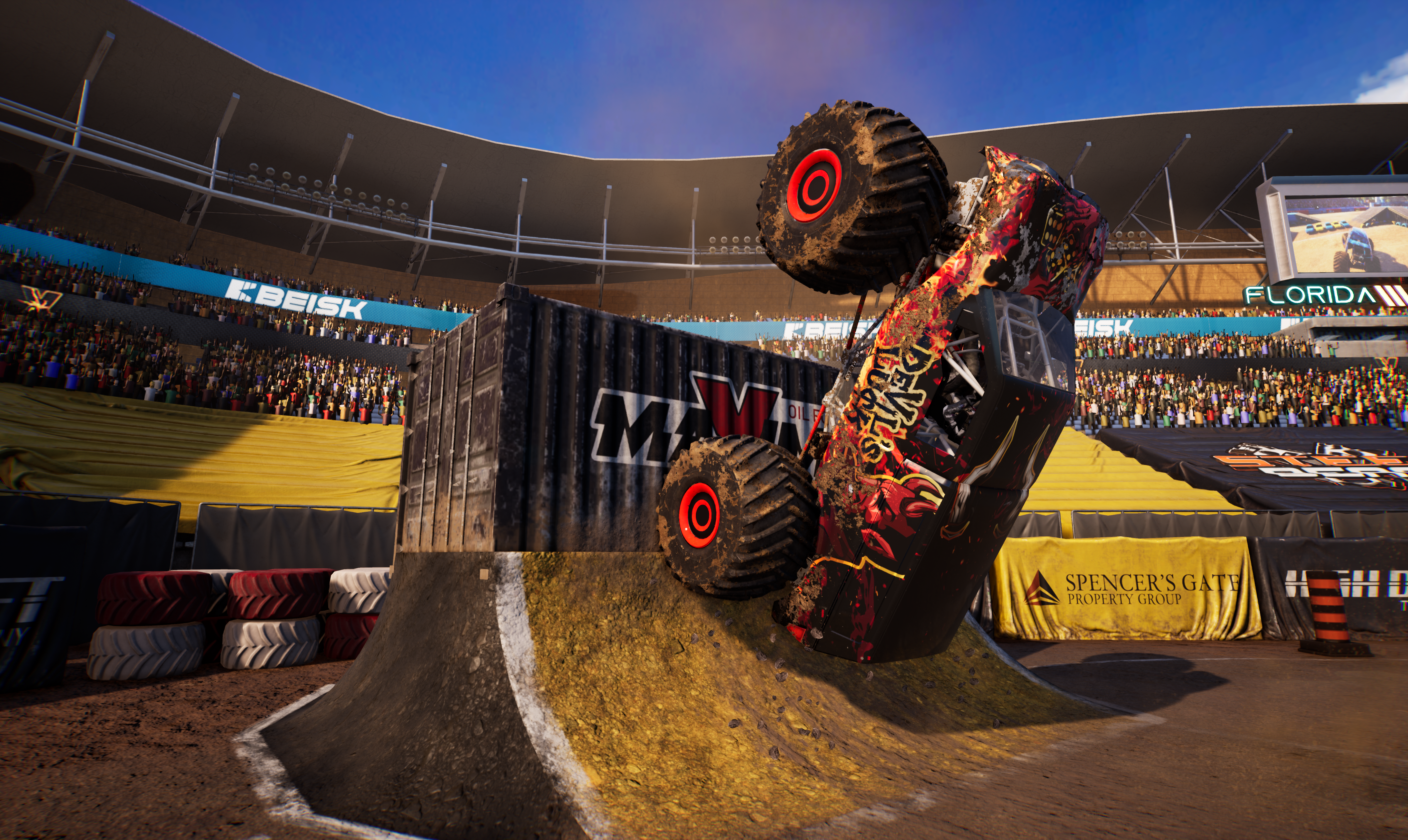 Monster trucks are cool. Big, brash, largely American and at times, completely stupid – but in a good way. Bouncing around arenas, often upside down, tearing off their own bodywork like a three-year-old who doesn’t like socks. But there’s never been a monster truck simulation so we at home can get a true sense of what they are like to drive.

Well, until October 2020 when Monster Truck Championship was first released on PC, PS4 and Xbox One. Then in November when it came out on Nintendo Switch. And again, this month, when it arrives on PS5 and Xbox Series.

That’s right, Monster Truck Championship is a simulator, aiming at a different audience to the more accessible and fantastical world of the also recently released Monster Jam Steel Titans 2. This is meant to be difficult, and to that extent, it largely achieves this goal.

While this is a review, to be clear, I will mainly focus on the next-gen version, as for many, this is a polished version of a pre-existing game. Your aim is relatively straightforward; start out from the bottom and work your way up to major league glory.

As you crash and bash your way through challenges, which range from run-of-the-mill races to side-by-side knockout events, stunt areas (‘Freestyle’) and destruction tests, your bodywork will fall off after contact and the damage will affect vehicle performance. There’s nothing worse than having to struggle to the finish of a race with a damaged wheel.

There’s a brief tutorial, followed by a full career that mixes all the event types. You earn money based upon your performance, which you can spend to unlock further events and to tune up your vehicle. This includes the ability to change the cosmetics too. More than just the vehicle colour, you can even unlock whole new body styles.

To further boost cash pay-outs, you must sign a sponsor that sets objectives. Meet these targets, get paid. There’s also a team management aspect, whereby you recruit individuals across a multitude of skillsets and thus providing perks such as a five per cent winning bonus.

Throw in online multiplayer – although even on the established last-gen versions it has been hard to find opponents sadly – and on paper it seems like there is plenty to work through. You may be forgiven for thinking that this is a glorified tech demo, but a full video game has been built upon the realistic physics.

Oh, and those physics. Once you learn their ways, controlling oversteer with both axles is a dark art, there is something enjoyable about the bouncy behemoths. This is helped by caravans, cars and portaloos that deform with a satisfying weight in the arena-based events.

For the PS5 and Xbox Series versions, you get dynamic 4K resolution and 60fps – a dramatic improvement over the last-gen console versions. The visuals have tarted up well, like an old ornament after some Brasso.

This biggest next-gen feature, however, is the loading times. I wouldn’t normally mention them with quite so much detail within a review, but they are staggering. The longest one you will see from between the career menu and the event starting on PS5 is – and I’m really not exaggerating here – two seconds. Two. Seconds. I’ve never seen anything like it, you flow from on event to another without so much as an interstitial.

But, one feature that isn’t utilised, sadly, is the DualSense, both the haptics and Adaptive Triggers have been given a miss, something that could have given an extra level of emersion and differentiation to this new version. In particular, with throttle control being so key to success for Freestyle events, this could have helped precision.

But, of course, the increase in console power improves aesthetics dramatically. However, despite the gameplay remaining relatively unique, the same old drawbacks remain.

Despite this being a simulation when you heavily damage your truck, you can never disable it – wheels never fall off in a race, for example. There are enough tracks and areas for the first few hours, 25 circuit variants in total, but you soon realise that there perhaps aren’t enough to sustain the full career. Too often, you’re driving in the same area that you’ve already seen before. You can generally earn enough to ignore the sponsor objectives, which is handy as sometimes the requirements are very difficult. There’s little incentive to buy a new truck later in the game, despite there being 16 unlockable versions.

As you plug away at the career or mess around with the straightforward online options – which lacks ranked matchmaking or leaderboard challenges – you soon realise that while the driving of the monster truck is more authentic than any monster truck game to this date, there isn’t enough pizzaz to stir the soul. Items we have become accustomed to in recent games such as a photo mode or replays are absent, for example.

The water gets muddier as the aforementioned Monster Jam Steel Titans 2 also now has the individual steering controls plus replications of well-known real-world trucks that are missing here. Unashamedly not a simulator, but offering substantially more bang for your buck. Monster Jam is a McDonald’s value meal, while MTC is haute cuisine without any cutlery.

I like Monster Truck Championship and the latest updated version gives console players smooth gameplay, the quickest loading ever seen in a video game and the best-looking visuals for this title. However, there are times when the experience feels a little hollow. If this game sells well enough across the six platforms, then I am very much looking forward to a sequel that doubles-down on the vehicle handling and ups the wow factor.