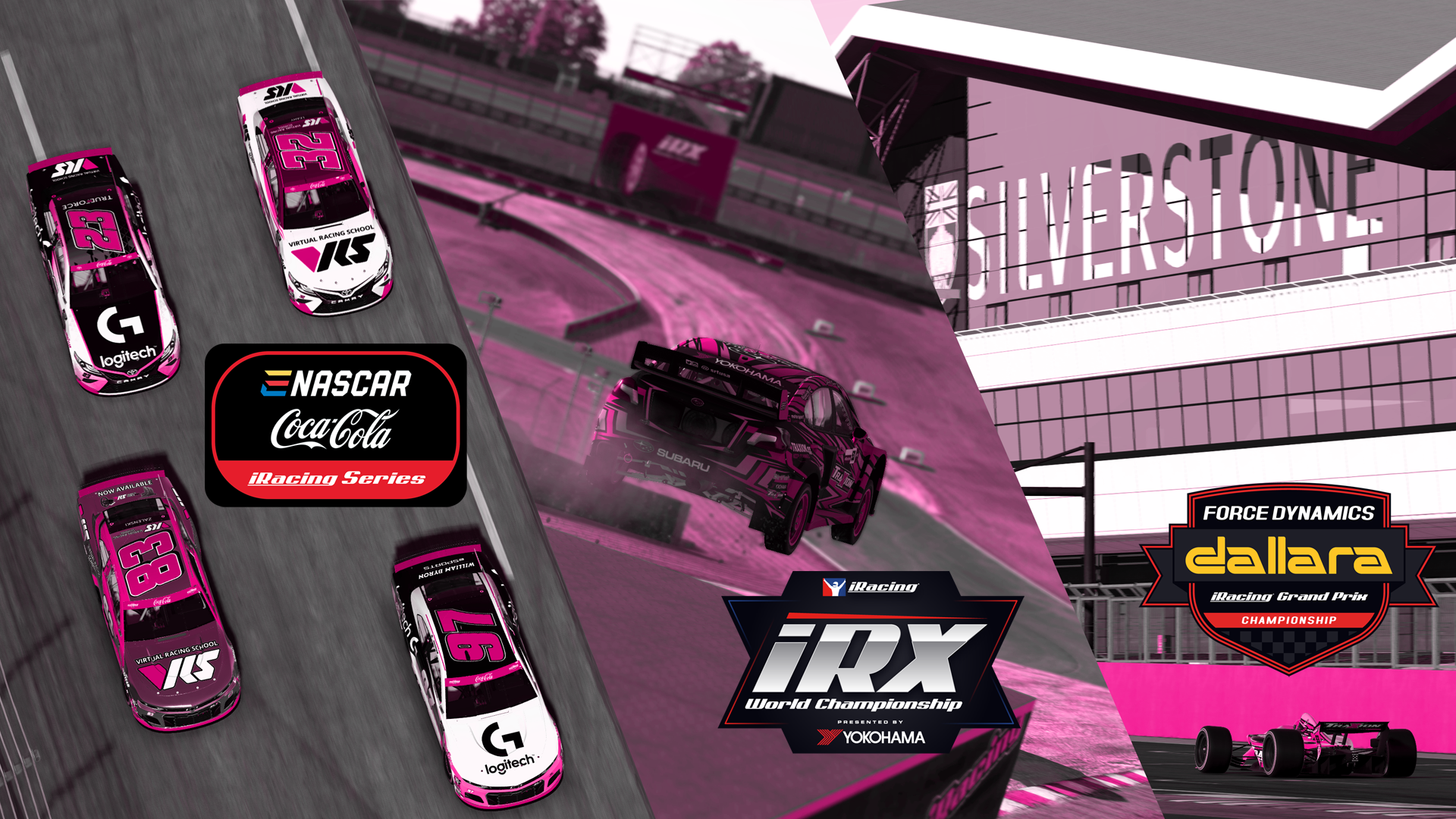 The final triple-header of top-level Esports on iRacing will take place this week from Tuesday to Thursday across three various disciplines on the service. For one series, it’s the grand finale of the season. The other two series will continue to power through the midsections of their 2021 campaigns.

The eNASCAR Coca-Cola iRacing Series concludes on Tuesday 12th October with the Championship 4 finale at Texas Motor Speedway. Four drivers have a chance to become the next eNASCAR champion, which comes with a $100,000 payout.

On Wednesday, the iRacing Rallycross World Championship Series presented by Yokohama will head to Brands Hatch for the first international event of the 2021 season. The All-Stars will kick off the evening and will be followed by the World Championship drivers, as per usual.

Finally, the long week ends on Thursday with the fifth race of the Force Dynamics Dallara iRacing Grand Prix Championship season. The open-wheel masters will take to another British race track about two hours away from the iRX race, up over at the Silverstone Circuit.

eNCCiS: A champion will be crowned at Texas

Competing since February, the eNASCAR Coca-Cola iRacing Series will finally conclude for the season with Championship Night at virtual Texas Motor Speedway. Four drivers (Logan Clampitt, Mitchell deJong, Keegan Leahy, Bobby Zalenski) will race in a winner-take-all showdown, or at least whoever finishes the highest of the group. The venue is a 1.5-mile oval that will likely feature a draft-dependent pack of racing throughout the night.

As those four title contenders battle for eNASCAR supremacy, a handful of drivers will also be battling for their spot on the 2022 series roster. While 15 of the 20 spots have been filled, the final five will come down to nine drivers. Right now, Ryan Luza, Dylan Duval, Zack Novak, Garrett Lowe and Garrett Manes hold those five spots. Jake Nichols, Ray Alfalla, Blake Reynolds and Chris Shearburn all have a mathematical chance to make it in and avoid relegation.

While Luza and Duval are relatively safe, Novak and Lowe just need to avoid catastrophic results at Texas. The hot seat belongs to Manes who sits only two points above the cut. Manes, Nichols and Alfalla all come into the finale separated by three points. Reynolds is 18 back and can pounce if all three have issues. Shearburn has the most unlikely road as he’ll need a win and back of the field finishes from those four ahead.

The Championship finale will take place on Tuesday night, 12th October, at 9:00 p.m. ET / 2:00 a.m. BST. The Countdown to Green will start earlier than normal, at 8:00 p.m. ET / 1:00 a.m. BST, but the green flag will be the same as usual. Tune in to watch the show (with special guest Dale Earnhardt Jr) at eNASCAR.com or on the iRacing social channels.

It’s been the Jon Robertson show for the last two races at Atlanta Motor Speedway and Iowa Speedway. As the series moves overseas to Brands Hatch, there are a lot of unknowns entering Wednesday’s event.

Brands Hatch is a staple circuit on many past seasons of World Championship racing, but it joins iRX for the first time in 2021. The configuration was added to the iRacing service in 2021 Season 1 alongside Charlotte Motor Speedway’s new Rallycross configuration. As one of the newest courses, there isn’t much data to go with to preview this particular track.

Thankfully, this track was on the Qualifying Series schedule earlier this year. In that, five races split among 50 drivers took place with four current World Championship drivers taking a victory that week. Kevin Ellis Jr won his race from the pole position while Thomas Wangen, Jarno Leskinen and Rasmus Tuominen also picked up victories.

As it’s been though, I would expect the Subaru Motorsports USA duo of Robertson and defending champ Yohann Harth to continue to go to battle with the SET Esports duo of Jonne Ollikainen and Tommi Hallman, as they’ve all been the consistent top drivers. That eNASCAR kid Vicente Salas has been pretty stout so far this season as well. Despite his misfortunate end at Iowa, he could be a factor on Wednesday too.

So far in the 2021 Force Dynamics Dallara iRacing Grand Prix Championship season, the four drivers at Apex Racing Team have been stout. However, it was R8G Esports driver Maarten van Loozenoord who picked up his second win of the season last week at Monza against those four.

The quartet of Peter Berryman, Yohann Harth, Michele Costantini and Ben Fuller have all had their share of successes after four races in this Dallara iR-01 battle. All four are inside the Top 5 in the standings, and two of them (Berryman and Costantini) have wins this season. While they all played Interlagos perfectly while van Loozenoord struggled, Monza was a different story.

I’d bank that the four of them played their best race of the season last week at the Temple of Speed, but van Loozenoord was not to be denied. With waiting to be the last to pit, van Loozenoord had the best tires for the end of the race and was able to make pretty much any pass, despite the numbers working against him.

Now with Silverstone on tap this week, it will be interesting to see if the trends continue. In the qualifying series earlier in the year, Harth took the pole, van Loozenoord ran the fastest lap of the race, and Costantini was victorious. They all finished in the Top 4 positions with Berryman finishing third. Fuller, also in that race, finished in 11th.

Can anyone else, like a Tamas Simon, Valentin Mandernach, or Sam Kuitert make any noise in the title battle? Can alternate tire strategies pay off for once this season? Tune in live on Thursday at 3:00 p.m. ET / 8:00 p.m. BST to watch and find out. Every race will be live on the iRacing social channels.