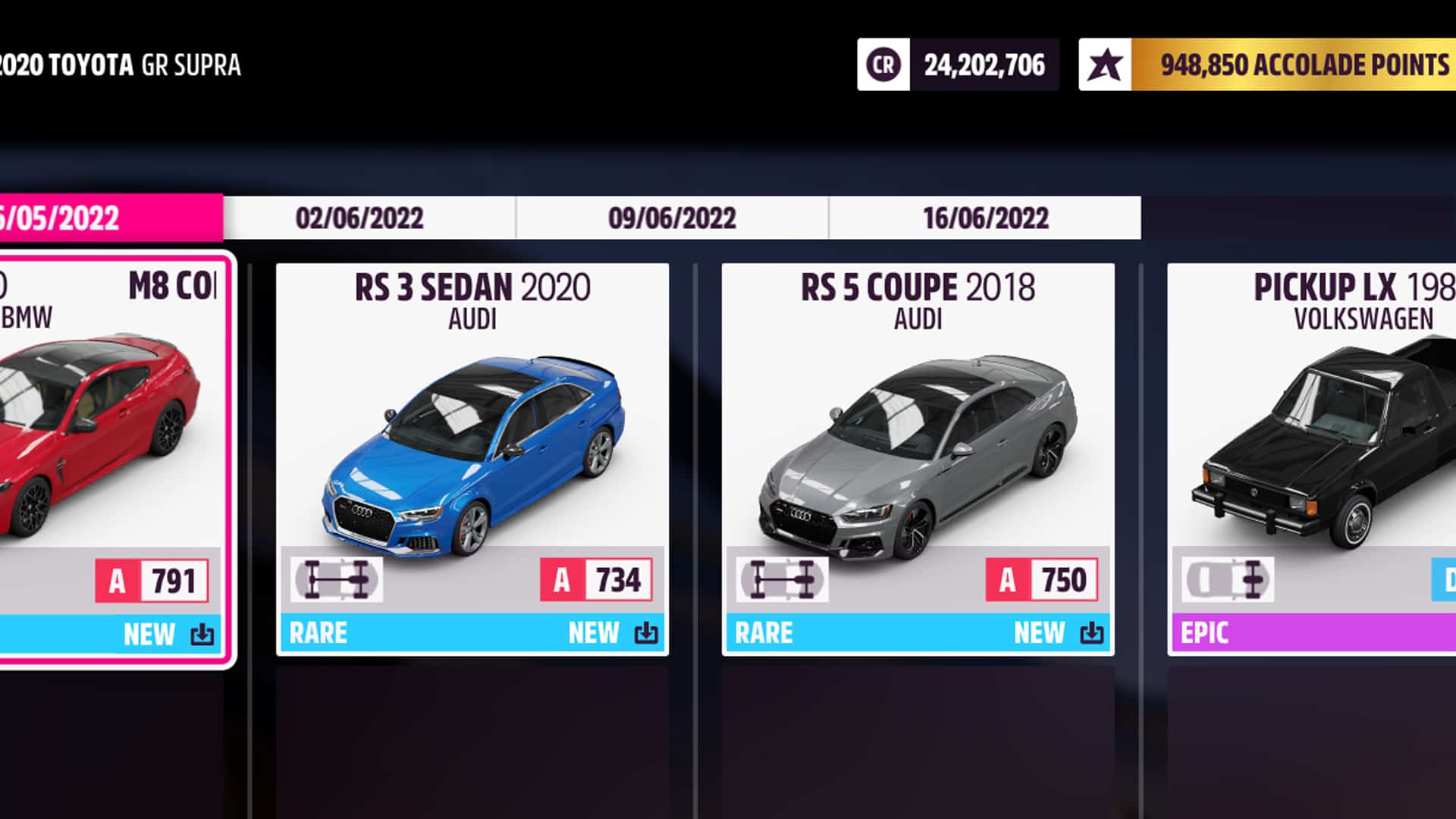 With Series 7 only just one day in, Playground Games has provided a Forza Horizon 5 Series 8 update preview and released the upcoming Car Pass additions.

No sooner has Series 7 of Forza Horizon 5‘s Festival Playlist been launched, than there is confirmation of several key Series 8 details for June 2022 – which is earlier than expected.

If you visit the in-game Festival Playlist and tab through to the ‘coming soon’ section, you will see a teaser for the next update, due around four weeks from now, 26th May 2022.

Historically, these have provided some hints as to a Festival Playlist theme, and the same is true currently. Except, this time for Series 8, three new cars are confirmed.

The Porsche 911 GT3 ’21 is a brand new addition to Forza Horizon 5, alongside the equally fresh Audi RS 4 Avant ’18 and a Mercedes-Benz AMG GT to complete a German theme.

We would expect up to five new cars per series, including the overall series reward, so it seems there remains little lift to reveal in the next Forza Horizon 5: Let’s ¡GO! episode.

“The reason we’re revealing them now is that they are actually included in this [game] update,” explained Creative Director at Playground Games, Mike Brown.

“Sometimes we include future content in an update as it allows us to more efficiently get more updates out on time. We’ll talk about this more on the Series 8 live stream in about four weeks’ time.”

The paid Car Pass for Forza Horizon 5 adds one car per week over an above the Festival Playlist additions. Instead of earning new vehicles through completing challenges, here, if you buy them, they appear in your collection upon release.

Usually, the four cars for the month ahead are revealed during a Let’s ¡GO! stream on the Forza YouTube Channel and then we update our Car Pass article. Then, every Thursday, a new car becomes available.

This time around, the four new cars were revealed and added to the upcoming roster in-game, but that same menu also displayed the German cars coming much further down the line. Upon the game’s patch, some users were also able to acquire these cars early.

The upcoming additions are:

All four models are new to the Forza Horizon series, as is the case with new Car Pass vehicles.

Tie these together with the four new cars coming this month – Dodge Magnum SRT8, Toyota Tacoma TRD Pro, Forsberg Racing Nissan 370Z rally car and Ford F-150 SVT Lightning – are these a strong lineup for the next two months.

What do you think of the upcoming German-themed Series 8 Festival Playlist? Let us know in the comments below.