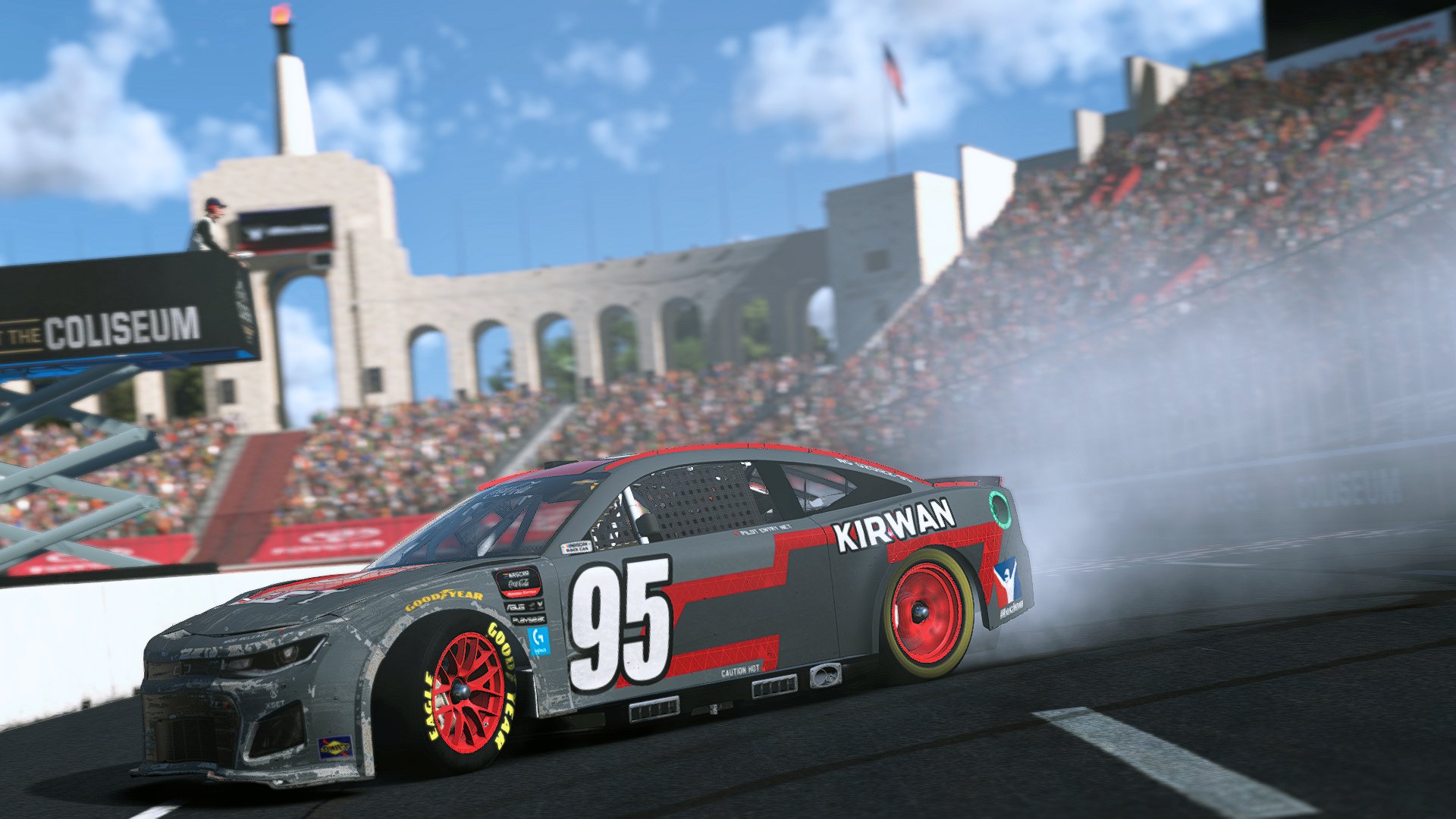 Months of planning, designing, testing and implementation were executed on Tuesday night with the inaugural running of the eNASCAR Clash at the LA Coliseum.

A track created on the iRacing service for a real-world extravaganza, the drivers of the eNASCAR Coca-Cola iRacing Series would get the first crack at the new track with their season-opening exhibition event.

After four heat races and a last chance qualifier, the 120 lap main event went to XSET’s Casey Kirwan. Kirwan took the lead from JR Motorsports driver Michael Conti on the final restart and never looked back, holding off 23XI Racing’s Mitchell deJong by more than two seconds for the win. The other JR Motorsports entry, driven by rookie Briar LaPradd, rounded out the podium.

The venue, as mentioned, is a quarter-mile, purpose-built short track inside the historic LA Coliseum in Los Angeles, California. The NASCAR Cup Series will debut the NASCAR NEXT Gen vehicles in race conditions for the first time on 6th February. However, the venue might not have been possible without the work put in by the team at iRacing. The track was developed alongside NASCAR on the sim, and on Tuesday night, we all got to see it play out virtually.

The race would be decided by four heats in which to transfer a total of 16 drivers to the main event, the Top 4 finishers per 25 lap race. Vicente Salas from Williams Esports took the pole position and led the field to the green for the first heat, while the other Top 4 qualifiers would also lead their respective heats to the green.

Heat one saw Salas, Michael Conti, Steven Wilson (Stewart-Haas Esports) and Garrett Lowe (Wood Brothers Racing) advance. For the most part, it was clean and collected, but the final transfer spot came down to a bump and run. Lowe gave the bumper to Briar LaPradd and just nudged him enough to take the spot.

The drivers in the third heat figured they could one-up the second heat, and in Turn 1 of the first lap, the pole sitter Parker Retzlaff (RFK Racing) got sent to the wall by Corey Vincent from Team Dillon Esports. Wreck after wreck, mayhem ensued. Graham Bowlin (Charlotte Phoenix), Liam Brotherton (Elliott Sadler Esports), Matt Bussa (MODE Motorsports) and Retzlaff’s teammate at RFK Kaden Honeycutt were able to move on to the main.

The final heat was a lot more subdued than the previous two. Defending series champion Keegan Leahy and his 23XI Racing teammate Mitchell deJong controlled the entirety of the race, leaving the other two spots up for interpretation.

Donovan Strauss (Williams Esports) wasn’t as quick, but was able to pull away from the cut line to also advance. The final spot also came down to argy bargy as Blake Reynolds (Jim Beaver eSports) stole it from Dylan Ault (LETARTE Esports).

The 23 drivers that didn’t advance through the heats were subjected to a 50 lap last chance qualifier. It was complete chaos as only six drivers would advance from the destruction derby.

Once again, both Clampitt and Alfalla found themselves in harms way, and neither championship-level driver would be able to advance. Two other eNASCAR champions, Ryan Luza (XSET) and Zack Novak (Rise eSports) would also find trouble and miss the main.

In the final run Dylan Duval (Stewart-Haas eSports) was able to move past LaPradd for the top spot to win the LCQ. Duval and LaPradd were able to take Michael Guest (Jim Beaver eSports), Retzlaff, Kollin Keister (Charlotte Phoenix) and Garrett Manes (Elliott Sadler Esports) to the main stage.

With the overall pole and heat victory, Salas kept the top spot and led the field to the green flag. The field was able to have a clean start, but the sentiment to get to the bottom and stay on the bottom outweighed a lot of professional driver’s common sense.

A few cautions early on thinned the herd a tiny bit. Unfortunately, Salas was one of those thinned out, but truly by his own accord.

One of the earlier cautions saw Keister spun at the exit of the infield. As he tried to whip it back around, he pulled out right in front of Salas, causing heavy damage. Slower and no longer in the lead, Salas was relegated to the field, which saw him making contact with multiple drivers as it sorted out on the restart.

Finally, he had enough and with only 28 laps completed, he sped up and rammed one of his aggressors, the No. 48 of Bowlin, straight into the barrier, ending both of their nights early.

By halfway, Mullis, Salas, Bowlin, Keister and Leahy were all behind the wall and out of contention. Bussa and Duval parked it shortly after that. With just under 40 laps to go, the field took their final restart of the night with Conti in control. Kirwan, however, was able to get the better of the 2014 Series Champion and moved him out of the groove.

Kirwan pulled away from there as Conti slipped back into the clutches of the pack. By the end of it, Conti wound up 11th overall. Both deJong and LaPradd tried to chase down Kirwan, but he was no match for the rest of the field with a clean track ahead of him. Kirwan scored the victory and claimed a NASCAR race weekend ticket package for two as his prize.

The 20 teams were finally made official by the start of the event. The final two teams were found as drivers began practice, with both Femi Olatunboson and Nickolas Shelton taking over the seats at Clint Bowyer Racing in 2022. Malik Ray and Derek Justis were the final two left and will compete on a 20th team together.

Overall, 17 drivers kept with their 2021 team, and three drivers (Cody Byus, Nicholas Shelton and Zalenski) managed to sign back with the team they drove for in 2019 during the first season of teams.

Byus wound up back with MODE Motorsports, Shelton re-signed with Clint Bowyer Racing, and Zalenski rejoins his former VRS teammate Alfalla at Joe Gibbs Racing. Nine other drivers from 2021 are driving for someone completely different in 2022.

Check out the full chart below.

The first official race of the season kicks off in two weeks at Daytona Int’l Speedway. The eNASCAR iRacing talent will take on the 2.5-mile superspeedway for 80 high-intensity packed laps. Coverage of the season can be found on eNASCAR.com/live or on the iRacing social channels.