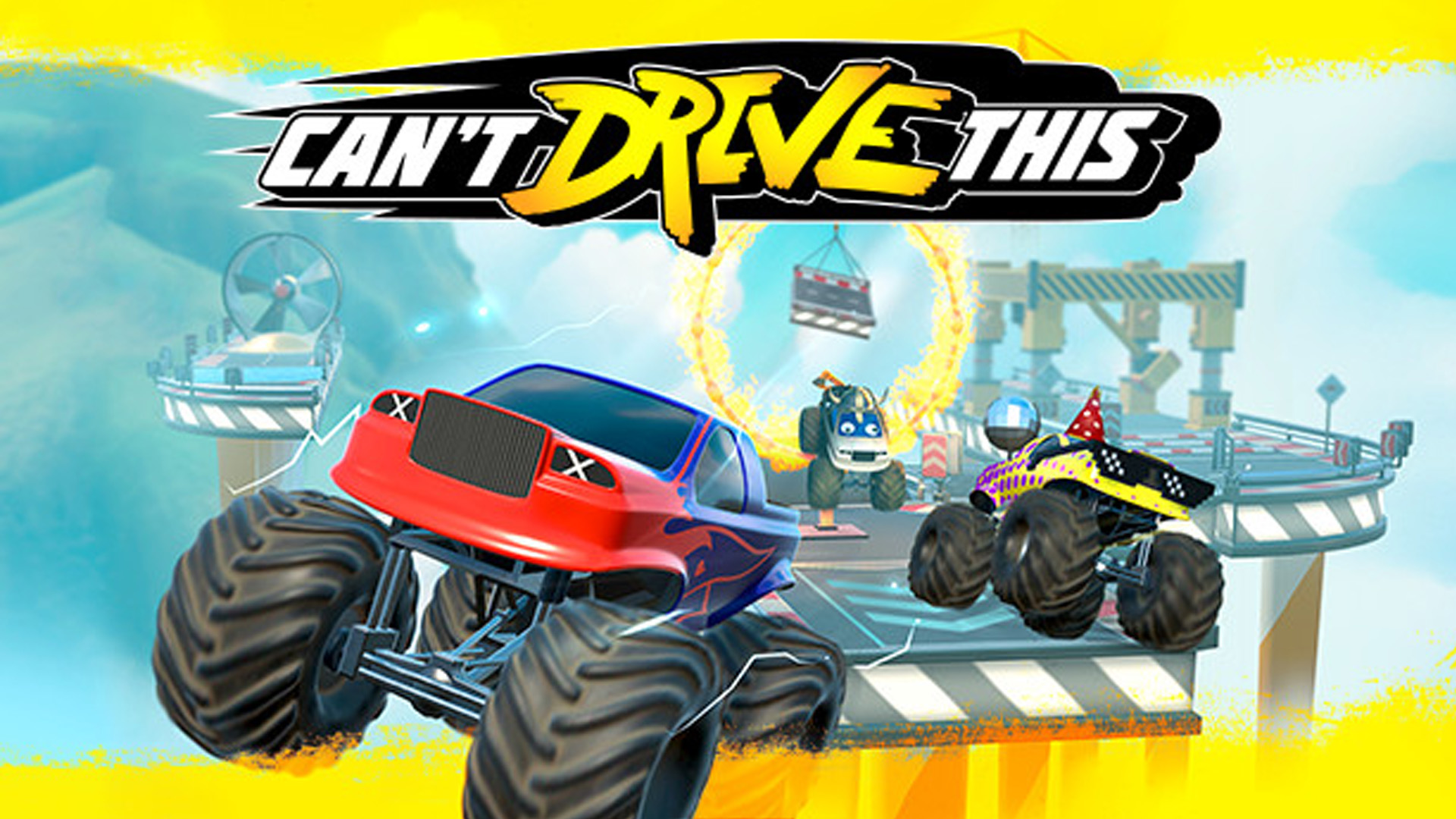 As fans of the co-operative chaos resurgence in games over the last few years, ‘Can’t Drive This’ has been on our radar for some time. Releasing in a final form today after a lengthy Early Access period, it is time to see if those years of feedback have paid off.

‘Cant Drive This’ is primarily a two-four player experience. The tag line ‘race the monster truck whilst your friend builds the road’ explains the game perfectly. You can’t Sunday drive it though – go too slowly and you’ll explode! The longer you survive, the faster you are expected to go and so the pressure mounts up. Since you’ll be playing the game entirely in split-screen, let’s take a look at each side of the gameplay in turn too.

Builders see the map from a top-down perspective. You’ll notice immediately that your build area is carved up into a square grid and every piece of road you place is a square inside that grid.

Road pieces are given to you randomly. They could be straights, turns, chicanes, jumps, boost pads, mud pits or water splashes. You decide exactly where to place them but obviously, unless you are truly cruel, you’ll be building a road for your friend to conquer.

Very quickly, more obstacles and trap tiles will be added into the mix too. Rings of fire, giant mounds, swinging saws, iron hammers – if it has been on Wipeout or Takeshi’s Castle then it’s likely to be here.

As a builder, you’ll be furiously laying down road tiles or trying to make alternative routes to get you out of trouble. There is a limit to your powers though as you’ll always be at the mercy of the RNG gods. ‘Can’t Drive This’ often does a good job of giving you tiles that work well together, such as two turns that you can rotate from a chicane into a hairpin if you need to. Sadly, it also enjoys providing three boost pads in a row and then a jump to watch all your hard work come undone.

As a driver, your life is in some ways a bit less hectic. Keep driving. Don’t stop. Don’t fall off the road. The monster truck has an unusual physics engine that takes time to get used to. Steering is heavy when dealing with any height change whatsoever, but touch some water or mud and you’ll understeer clean off the track. When the terrain is level, the truck handles more like a chunky Micro Machine but ‘Cant Drive This’ doesn’t allow normal for more than five seconds. Expect a steep learning curve and some frustration as you wrestle the truck into submission.

The crux of the gameplay is that if you don’t fall off the track, then you need to keep up speed as otherwise, the car will flash red and promptly explode. This seemed to be really inconsistent during our games. We couldn’t tell after several hours whether it’s a cumulative slowness or if the minimum speed increases over time. Sometimes you go bang immediately and other times you could gently rev around without much problem. Either way, touching barriers is bad for all concerned so avoid everything at all costs!

Yardage is the distilled version of ‘Can’t Drive This’ – just driver and builder trying to survive. You score points for how far you travel and how many of the road tiles your driver actually drives on. Points are removed for unused tiles, meaning builders can’t just spam away.

This was fun for a while, but we found that the goal-orientated ‘Game of Drones’ had more longevity. Here, you have to build roads to collect pick-ups through random level layouts. On top of that, a drone is busy firing EMP bombs at you. Run over them and you’ll lose the ability to steer – usually resulting in a delightful topple off the track.

These puzzle-like levels get longer and the drone gets more aggressive the longer you stay alive. We found that having a common enemy in the drone made us work together to defeat it and that felt really satisfying. Yardage’s focus on local and online leaderboards felt largely arbitrary. Every run is random – how can one score truly compare to another?

If you don’t want to help each other, the four-player ‘Capture the Egg’ mode should be your jam. This sees you working in two teams of builder and driver to create a road across to the other team’s base, steal their egg and drag it back to yours.

The problem is that the other team is doing the same thing. Tactics can be used throughout as the other driver can attempt to smash you off the road or go for your egg. Meanwhile, the other builder can place down tiles in your path to make your life a misery. The egg also gets stuck on walls or traps as it pings around like a giant swingball.

The mode is chaotic and can be great fun, but all of you need to be good players to get the most out of it. When that happens, it’s a delight to play. If not then it descends into repetitively clunky restarts and not a lot of action.

The feeling of ‘Can’t Drive This’ being a very stop/start experience plagues each game mode. It is baked into the games very design. A builder can’t create any further than a couple of tiles away from the driver. The driver can’t slow down for long to consider their actions. Instead, we ended up spin turning and driving back down the road we had built whilst verbally communicating where we wanted to build next. It was the only way to keep us alive for more than a minute.

This stop/start cadence is exasperated by a constant bug where steering would become unresponsive for half a second at random intervals. We laughed an awful lot but we also grew quite tired of how little progress we ever seemed to make too.

If this sounds a bit overwhelming, there is a slow mode you can activate. This keeps the top speed of the truck down so you can have more time to consider your moves. The builder issue of being tied right next to the truck still remains though.

It also made me wonder just how satisfying playing online with randoms would actually be. To survive in ‘Can’t Drive This’, you have to communicate. It’s hard to do this with people you aren’t acquaintances with and so I foresee the matches being very short and not very enjoyable after the initial meme-worthy failure glow wears off. Capture the Egg would work better online, but that is a local-only mode.

Lone Driver is the single-player mode that cleverly lets you switch between driver and builder. You have a time limit to drive as far as you can switching modes as you go. An extra addition, but it felt unsatisfying. We’d have rather had the ability to make courses, upload them and have time trial runs as the single-player mode instead.

Can’t get no satisfaction

Ultimately, ‘Can’t Drive This’ couldn’t give us long term satisfaction. Progress felt hollow and non-existent. It is also a game that has a quite unforgiving difficulty curve that will put off the more casual gamer trying to get started.

There is a great concept here, but it is tied up in some skewed game design compromises and often, a lack of tangible goals to come back for. Perhaps with some future tweaks and improvements, that hook will come but for now, consider this only as a palette cleanser between main meals.