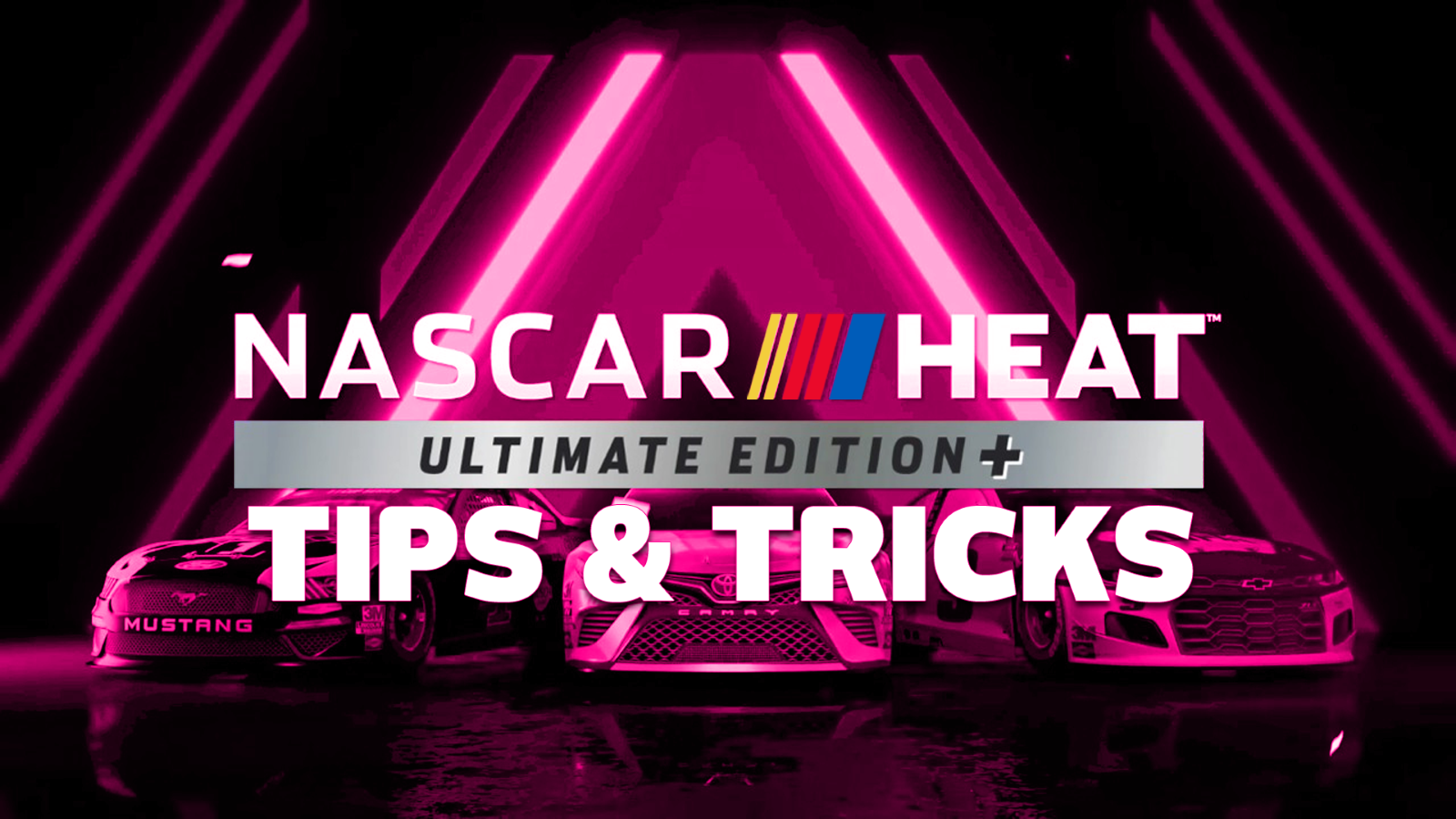 NASCAR Heat Ultimate Edition+ is a new game to the Nintendo Switch family. While the game is technically a port of the previously released NASCAR Heat 5 for Xbox One, PlayStation 4 and PC via Steam, this title might be a whole new world to a select group of gamers who have never experienced NASCAR Heat before.

Ultimately, this is NASCAR gaming on the go with the Nintendo Switch. The game can be played handheld or on a docking station to a television. It supports single-player career and online as well as a split-screen single race mode. It’s almost like NASCAR Heat was made for the Switch console, which is a good thing for this port.

I’ll be diving into some of the basics for NASCAR Heat Ultimate Edition+ to help get everyone started. From setting up the controls to starting a career, from playing online to customizing your driver, and everything else in between, I’ve got what you need to succeed in the latest portable NASCAR game.

A key difference between NASCAR Heat Ultimate Edition+ and NASCAR Heat 5 is the inclusion of the 2021 NASCAR Cup Series roster. You can play the game in either season, 2021 or 2020, but the game will treat the two areas separately from one another.

With that said, you can play the whole time in one or the other, or move back and forth through the main menu on the right-hand side. Certain things can only be accessed in the original 2020 roster, however. Things such as Challenges and, of course, the 2020 NASCAR Cup Series paint schemes are only in the 2020 mode.

First things first, you’ll set up how you want to play the game. There are four difficulty presets – Casual, Normal, Hard and Expert. The lower you are, the easier things will be. More driving assistance will be implemented and the AI will be turned down. Conversely, the higher you go, the harder it will be.

Being on a Nintendo Switch with digital controllers, the gas and brake aren’t pressure sensitive in any sense. It’s more of a constant full-on, full-off sensation when pressing the corresponding buttons. Turning all the assists off would need an expert touch to not completely spin on take-off or lock up the brakes when attempting to slow down. Start at a lower setting until you get more comfortable, then raise it up from there.

One important thing to note, however, is that at a certain point, having enough assists turned on will turn off the in-game custom or premade setups. If you want to still have the ability to change the way the car drivers in the setup, then you’ll likely have to use a custom assist mode to get the right feel and keep the setup screen available.

As it usually is with NASCAR console games, the career mode is the big-ticket item for the majority of it. The NASCAR Heat Ultimate Edition+ Career Mode is fairly linear. You can hop in at the very bottom of a career or start in the top series.

There are four series to race in – The Xtreme Dirt Tour, the NASCAR Camping World Truck Series, the NASCAR Xfinity Series and the NASCAR Cup Series – and there are two paths to take as well. You can either race each season as an owner/driver or just drive for a preexisting team

As an owner/driver, you’ll create your own team, manage your own expenses and personnel, upgrade equipment and work up the NASCAR ladder. NASCAR fans, think of it like Jordan Anderson or Tommy Joe Martins the last few seasons in Trucks and Xfinity.

The ultimate goal is to become the NASCAR Cup Series champion. The cool part is that you can make that journey as drawn out or as brief as you prefer. Of course, winning the other championships is part of the fun as well. The higher up you go series-wise, the tougher it will be to succeed at that level.

If you’re struggling with completing goals for sponsors, maybe think about taking a lower goal. Completing goals in general are good for the business relationship you share with your sponsor. If you’re constantly failing to meet expectations, it will make retaining sponsors and finding better rides a bit tougher. Also, you’ll at least have some income, even from a lower goal.

Speaking of money, each step up the ladder gets increasingly expensive. Running a truck organization is a lot tougher than running an Xfinity Series or a Cup Series team. People will need to be paid more, upgrades will be more expensive, and race vehicles, in general, will cost extra. Don’t spend all your funds as soon as you get it, run the minimum it takes to be competitive.

Pro-tip, you don’t need to buy a road course vehicle when you only race them three times a season. It’s your fake money though, so spend as you please.

Each series has its own schedule of events, playoff format, and roster of drivers to go up against. The three lower series are the same rosters in either 2020 or 2021, unfortunately. Also unfortunate, the 2021 version doesn’t follow the 2021 NASCAR Cup Series schedule. NASCAR Heat 5 was made for the 2020 season, so the game continues to follow the 2020 schedule as was originally programmed in the game.

While Road America is drivable with the Cup cars, it doesn’t appear on the career schedule for the Cup Series, only as what it was in the 2020 season as an Xfinity Series standalone. There is also no Daytona Road Course, Circuit of the Americas, Nashville Superspeedway or Bristol Dirt Track that the Cup cars can race on.

If there’s a race weekend that you’re not excited to participate in, it can be skipped and simulated. You can also choose to turn on DNF’s in the settings. If you crash hard enough, you’ll end the race without completion.

If you choose to start from the bottom, a Hot Seat might become available to you in a higher series. Complete these Hot Seats and you’ll get money and a better chance at a better ride sooner in that series.

There will be incentive-based challenges from sponsors to complete that you can choose how easy or difficult. An easier challenge will yield a smaller monetary prize. Momentum is something that can be earned during a season that provides a bit of a speed boost.

You get into rivalries with drivers by running them dirty and will make it harder to race around them. On the opposite side of the coin, if you work together with another AI driver with drafting and making clean passes, you’ll get friendly with them, making them more likely to work with you.

For NASCAR Heat Ultimate Edition+ on Switch, up to 16 players can get into a lobby and race against one another or a number of AI cars. A host can set up the lobby, choosing most of the details that could be chosen for an offline race. Options range from the basics, like lap count, and flag settings and the track, to the number of assists that can be turned on or off.

One thing to keep in mind when registering for or setting up a lobby is which roster you’re currently accessing the online from. If the lobby is set to use the 2021 roster, a player trying to connect while using the 2020 roster will be asked to switch.

If a lobby is kept going past a single race, the next race will line up based on best lap times put down during the previous race with new lobby members starting in the back.

The NASCAR Heat Ultimate Edition+ paint booth is very easy and straightforward but also doesn’t provide a particularly deep level of customization. There are a ton of sponsors to choose from to place on your car, but the logos are not movable, nor are the numbers. Nothing can be resized, either.

Colors are fairly detailed in NASCAR Heat Ultimate Edition+ for Switch. There’s not a full color wheel, but the shades of certain colors can go brighter or darker to get that right feel. Numbers can be set to single or double digits, even those that are already taken. This paint booth also added a few new fonts from the previous Heat game.

A character can also be created in NASCAR Heat Ultimate Edition+ Switch. Details such as facial features, weight, height, and uniform can all be adjusted. When you load up a race weekend, you’ll see your character leaning on the race vehicle. When you win, your avatar will celebrate in victory lane.

If you do create something in career, do be warned that you’ll have to recreate it for other game modes such as online play or a single race.

The two options on the main menu in the center are Race Now and Race Modes. Race Now is fairly self-explanatory. Pick a series, pick a car, pick a track, go race a single race event. Race Now is great for getting to learn a circuit for the first time in a race setting, perhaps to see how different settings might work out.

Race Modes has four different options. Test Session is like a practice session, but with no other cars on the track. Split Screen is a local multiplayer option to allow two players to race in a session offline on one console.

Finally, Championship mode is everything minimalist about Career with the added benefit of customization. You can run the 2020 schedules as normal, or create your own thing. There are no team signings, sponsor obligations or building cars, it’s all the same and straightforward in this mode. This mode is just if you want to win a championship right away.

What do you think? Are you ready to become the next NASCAR champion? Just remember that this is a starting guide for beginners. If you have any further questions related to NASCAR Heat Ultimate Edition+ for the Nintendo Switch, ask away in the comments below.